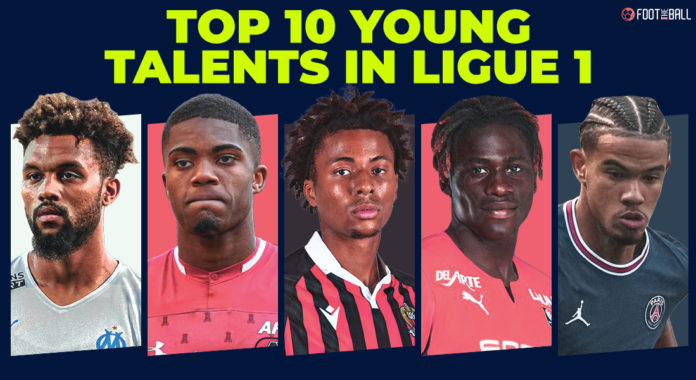 Ligue 1 has been one of the breeding grounds for the best young talents in football. French football has been extremely supportive towards developing teenagers.

Therefore, it is no surprise that the eyes of Europe are all over the French league. There have been notable sales too over the years. Eduardo Camvinga and Aurelien Tchouameni went to Real Madrid in consecutive seasons.

With the new season fast approaching, it makes sense to have stock of the best of the youth. In that regard, FootTheBall lists the top 10 starlets to watch out for in Ligue 1 for 2022-23.

Bossing a game against international oppositions at the age of 16? That is Zaire-Emery’s life. The defensive midfielder has been touted as the future of PSG’s midfield and is the brightest star in their youth academy.

Zaire-Emery has already turned heads with superb showings in the UEFA Youth League in 2021-22. The arrival of Christophe Galtier bodes well for the Euro U17 2022 winner.

Galtier is a proven expert in nurturing young talents as was evident in Lille’s miraculous 2021 Ligue 1 triumph. Therefore, the signs are good for Zaire-Emery to break into the senior team soon.

The French midfielder has been in Nice’s youth setup since he was 13-years-old. Wade has been a regular part of Nice II (reserves) since 2018. Moreover, he has already made one appearance for the senior team.

It came in early 2019 against Lyon. With a new manager in Lucien Favre, Wade will be looking to make a sizeable impact. He can make the step up the senior team soon and would not look out of place.

The JMG Academy graduate had been with Clermont since 2019. Abdul Samed’s had his first full season in 2021-22, making 31 appearances and scoring once.

The 22-year-old has joined Lens for the upcoming season to offset the departure of Cheick Doucore.

Who is Mathys Tel, signed by Bayern Munich from Rennes, to offset departure of Robert Lewandowski

Lens are one of the best at blooding youngsters into the first-team as much as possible. Therefore, it will be no surprise to see him have a starring role in 2022-23. Lens are a strong contender to finish in the top-six and Abdul Samed can help massively.

Alongside Zaire-Emery, PSG are also blessed in the attacking department. Kalimuendo spent the last seasons at RC Lens where he honed his craft.

A wily striker who could become the perfect secondary to the star-studded frontline. It is unlikely that Galtier will let him on loan which bodes well.

PSG know that the futures of Lionel Messi and Neymare are up in the air. Therefore, having someone of Kalimuendo’s ilk they can really shape is necessary.

The Dutch striker had six goals in all competitions for the Monegasque side in 2021-22. Boadu has been inconsistent over the years, largely due to injuries hampering his progress.

He is still 21-years-old and is gaining experience behind the pair of Wissam Ben-Yedder and Kevin Volland.

0.56 – Among all players born after 1 January 2000, only three players in the top 5 European Leagues averaged a higher Expected Goals value per 90 minutes than Myron Boadu. Prospect. pic.twitter.com/CVVngtrKZV

Monaco are one of the best sides in Europe to develop young stars so Boadu will not feel out of place. After a good and stable debut season, it is time to kick onto greater things for club and country.

One of the biggest success stories for Lyon in 2021-22. Lukeba was with Lyon B in 2020-21 before graduating to the senior setup before last season began.

Lukeba will be aiming to follow the steps of Rayan Cherki, who has developed into an integral part of Lyon’s team

He performed admirably on several occasions as Bosz trusted him with more responsibilities. Furthermore, he also added two goals which means there is some attacking prowess too.

Lyon are filled with star talents, including Malo Gusto at right-back. Therefore, Lukeba has a real chance to establish himself for club and country in 2022-23.

One of the smartest clubs in Europe who have regularly churned out top-rated youngsters. Rennes sold Camavinga to Los Blancos and have one of the most promising midfielders in Kamaldeen Sulemana.

Tchaouna is a striker who is just 18-years-old and featured 10 times in 2021-22. Needless to say, the minutes and responsibilities are set to rise in the coming season.

Tchaouna has all the traits necessary to succeed as the next big sensation from Rennes on the continent.

The 20-year-old forward has spent the last two campaigns on two separate loans. Musaba was at Cercle Brugge in 2020-21 before moving to SC Heerenveen in 2021-22. He has shown enough promise and talent to remain with Nice in 2022-23.

Rennes have Lovro Majer, considered the successor to Luka Modric, and one of ablest midfielders in Europe

Despite having Kasper Dolberg and Andy Delort, the club could use the services of Musaba. His young age means there is plenty of time to learn and shape him up in a particular manner.

Moreover, the club is known for giving youngsters chance with the likes of Amine Gouri shining.

The former Barcelona youth player joined Marseille in 2021. Fuente made 16 appearances in Ligue 1 during 2021-22. That was a decent return for a player in his debut season at the age of 21.

There is plenty of time for him to settle down into a regular role. Fuente is noted for his attacking qualities, but can be found wanting at the back.

Therefore, it is a delicate balance that new manager Igor Tudor needs to strike. There will be chances for Fuente and he has to show that he can truly flourish in a senior setup.

Diomande has played for Lyon’s senior team since 2020. However, he featured only six times in Ligue 1 in 2021-22. The 21-year-old defender would be desperate to show the club why he can mix it among the best.

Diomande has all the tools to succeed including manager Peter Bosz. The former Ajax boss is known for promoting young talents which would be good news for Diomande. Though he is unlikely to start many games, he could surely be one of the first names off the bench.