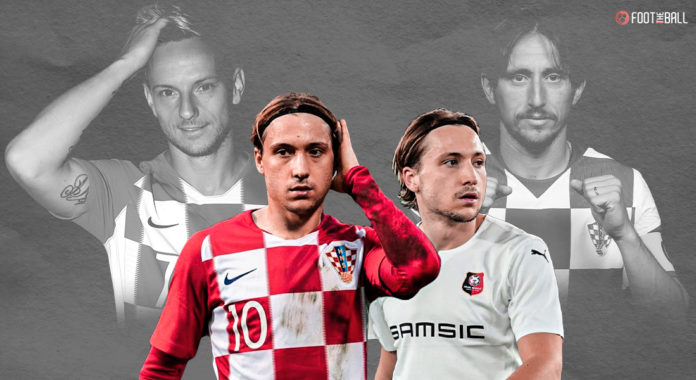 Real Madrid are at it again. With their new transfer strategy of going after young Galacticos, Los Blancos are gearing up for their next target.

They are looking to close deals for Gabriel ‘Gaga’ Slonina and Aurelien Tchouameni but that is not all. Madrid are now interested in upcoming Croatian midfield star Lovro Majer, currently of Rennes.

🚨 Real Madrid are interested in signing Lovro Majer from Rennes this summer as they search for Luka Modrić's long-term replacement.

Modrić himself recommended the Croatian to the board. 🇭🇷

The last time they signed a Croatian midfielder…turned out pretty well. Florentino Perez is aiming to repeat that trick with Majer, who many consider the successor to Luka Modric.

Moreover, the Ballon d’Or himself has seemingly recommended Majer to his current club. It will be no surprise if Madrid sign the future star of Croatia in the coming weeks or months.

Who is Lovro Majer?

Lovro Majer started his professional with Lokomotiva in Croatia, before signing for the national powerhouse Dinamo Zagreb.

At Zagreb, he put in several masterful performances which led to three straight league titles. Rennes snapped him up in 2021, and he caught the attention of Europe in his debut season.

Majer is primarily a central midfielder who can also advance the ball quickly, alongside dropping wide to facilitate play. No wonder Rennes were able to develop him thoroughly, given their business model of being a smart club.

Moreover, Majer has also played and scored for the senior side, with his debut coming way back in 2017.

It is a marvel to watch him play, and with Modric getting older and no Ivan Rakitic, Croatia have another gem on their hands. He will slot in seamlessly alongside Mateo Kovacic and Marcelo Brozovic in the future.

Given that he has played at a senior level for quite some time, Majer has been consistently wowing onlookers. He had six goals and eight assists in Ligue 1 with Rennes in 2021-22.

That kind of duality speaks bodes well for a player who is constantly being heralded as his country’s next big star.

Majer had his finest game for Rennes in December 2021, against Saint-Etienne. He provided a hat-trick of assists to another Rennes hero, Martin Terrier, and forced an own goal too.

According to FBREF, Majer had 8.35 progressive carries per 90 over the past year, putting him in the 98th percentile. Additionally, he was also involved in 4.27 shot-creating actions per 90, good for the 99th percentile. The similarities with Modric could not be any clearer.

With all the talks of being the “next Luka Modric,” it has been refreshing to see how Majer combines many traits. He is an extremely cool customer, not fazed by pressure in the slightest. Majer takes his time on the ball, before switching into attack mode.

His ball-carrying skills have already been highlighted above, but what is often missed is how well molded he is on the defensive aspect too.

9 – Lovro Majer 🇭🇷 has delivered 9 secondary assists (penultimate pass before a goal) in Ligue 1 this season, more than any other player in the top 5 European leagues in 2021/22. Trigger. pic.twitter.com/VYA5S19INR

No doubt playing with Kamaldeen Sulemana has also helped Majer refine his own game, alongside learning from the best with Croatia. He is ready for the next step in his young career.

Real Madrid are amongst many clubs interested in signing Lovro Majer. Therefore, it will not be an easy fight to land one of the most coveted midfield talents.

🚨 PSG are preparing to make an offer to Rennes for Lovro Majer from Croatia.

However, where Madrid hold the advantage is having a legend of Croatia. Modric will be key in convincing Majer to come to Santiago Bernabeu. Rennes will be willing to sell Majer if the right offer comes, knowing they cannot compete. Will Majer keep shining for one of the biggest clubs in the world? Definitely.