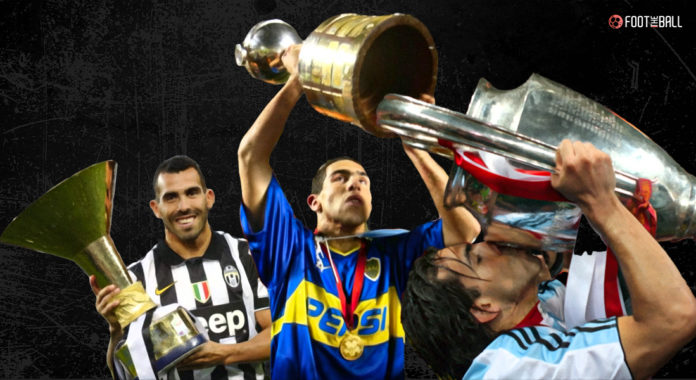 The player who could do it all up front has announced his retirement. Carlos Tevez, one of the greatest forwards of all time, is leaving the field.

The combustible Argentine was a serial winner wherever he went, and is a legend at Boca Juniors. Tevez has left a trail of spectacular goals and bewildering moments throughout his career.

The 38-year-old has a trophy cabinet that many players could only envy. Tevez became a household name in Europe after his big-money move to West Ham United.

He would go on to play for both Manchester clubs with distinction, preceding spells with Juventus, Shanghai Shenhua and a return to Boca Juniors. Tevez was part of the star-studded Argentina squad that won gold at the 2004 Summer Olympics.

Carlos Tevez has announced his retirement at the age of 38.

Thanks for the memories, Carlitos 🇦🇷 pic.twitter.com/GSgwDVJ0TS

Moreover, he has also played at two FIFA World Cups and four Copa Americas, racking up a total of 76 caps and 13 goals. In honour of his retirement, FootTheBall looks at the top 10 moments from an extraordinary two-decade-long career.

Carlos Tevez was a prodigy ever since he burst onto the scene with Boca Juniors as a 17-year-old in 2001. The following season would become the first chapter in a career filled with incredible chapters. Boca Juniors would win the Primera Division, Intercontinental Cup, and the Copa Libertadores.

Current Boca player Carlos Tevez was part of the squad that won the trophy in 2003 pic.twitter.com/5MfcayIrgc

Still only 19, Tevez had a fantastic full season with 16 goals across all competitions. In the final of the Copa Libertadores against Santos, Tevez scored in the second leg as Boca ran out 5-1 winners on aggregate. Tevez was named the MVP of the tournament with five goals and several stellar performances.

It truly takes something special for an Argentine to become the best player in Brazilian football. That is before Tevez arrived on the scene with Corinthians in 2005. Though there were concerns surrounding his big transfer fee, Tevez immediately justified his value.

Carlos Tevez: "I received my first big salary when I went to Corinthians. I bought 10 houses and took all my uncles and aunts out the neighbourhood. We had a bbq at home and I gave them each their key, without them knowing anything. I surprised them all." ❤🇦🇷 pic.twitter.com/7Ef3Tc7USU

31 goals across all competitions, including 20 in the Brasileirao, confirmed Corinthians as champions. Tevez was crowned as the league’s player of the season, winning the Bola de Ouro (Golden Ball) and Bola de Prata (Silver Ball).

The Argentine squad at the 2004 Summer Olympics had all the modern greats. However, it was Tevez who stood out in his trademark fashion. Eight goals in six games confirmed him as the top scorer, including the winner in the final.

Sergio Aguero was one of the stars of the said Olympics. Here are his best moments from a glittering career.

Argentina ran out comfortable winners with several members of the squad playing that year’s Copa America. Tevez and co. would reach the final once again. However, this time they would fall to Brazil. Nevertheless, his career was already taking flight.

Hammer of the Year

Tevez’s move to West Ham United in 2006, alongside Javier Mascherano, was filled with acrimony over third-party disputes. However, he was cleared to play for the Hammers and would go on to have a memorable debut season in England.

West Ham would be battling relegation all throughout the 2006-07 campaign. Nevertheless, Tevez would keep showing his mercurial self, showing glimpses of just how deadly he would become.

"The message I have is to keep the same passion that I know you've always had. This was my first club in Europe, it was like my first love. The fans are so passionate, have an unconditional love for the team and make it totally different from any other fanbase."

Though he could score only seven goals in the Premier League, the last of those was crucial. Facing future club Manchester United on the final day, West Ham needed a win. Tevez scored the winner in a 1-0 victory.

That result, coupled with Sheffield United failing to defeat Wigan Athletic, meant West Ham were safe from relegation. Thus, Tevez was an instant folk hero and was designated as ‘Hammer of the Year.’

The Red Devils would sign Tevez on a two-year loan in 2007. He would immediately become a key piece of the unstoppable front three. Tevez, alongside Wayne Rooney and Cristiano Ronaldo, would terrorize opponents all season long.

United won the Premier League at a canter, before defeating Chelsea in the Champions League final. Edwin van der Sar had a career night in Moscow, but Tevez played his part by scoring his penalty. He finished with 19 goals across all competitions, a sign of things to come.

Tevez’s journey with United would come to a bitter end after the club did not meet his transfer requirements. City swooped in to buy him, and their fans had a jolly good time reminding United what they lost.

Tevez is joined by some very illustrious names who have played for both sides of Manchester.

ON THIS DAY 10 YEARS AGO: Carlos Tevez left Man United to sign for Man City…

Throwback to this poster once the deal was completed! 👀 pic.twitter.com/8wsFf92ck8

The supporters put up the now infamous billboard stating “Welcome to Manchester,” in the middle of Manchester. Needless to say, United fans were pretty riled up by everything that happened and the relationship with Tevez had a breakdown.

Carlos Tevez was never one to be silent for too long. At City, he would often have feuds with Roberto Mancini, including the infamous bust-up in a match against Bayern Munich.

With some unusual celebrations along the way 😂

However, Tevez was also a serial goal scorer who picked up his first Golden Boot in 2010-11 with 20 goals. Tevez was named to the PFA Team of the Year, and he played his part in the starry front line. Nevertheless, the problems would just not go away as it was becoming increasingly clear he would leave the club soon.

Two seasons, 50 goals, two Serie A titles, and one Coppa Italia. Carlos Tevez was a cheat code for Juventus in one of their most successful periods. He was the club’s player of the season in 2013-14 and helped the club reach the Champions League final in 2015.

We’ve thought about it, and our favourite Carlos Tevez is the one who rolled up at Juve when people thought he was cooked, got himself butcher’s dog fit, and terrorised Italy.

However, Juventus would suffer defeat at the hands of Barcelona. Nevertheless, Tevez had a solid season, but it would be his last appearance for the Old Lady.

Juventus won the domestic double in 2015 before Carlos Tevez rejoined Boca Juniors in between their own season. His goal was to win the league and made a hot start in that regard. Nine goals in 15 matches provided Boca Juniors with the final impetus they needed.

For Boca, against River. In the quarterfinals of the Copa de la Liga. Wouldn’t have it any other way 💙💛pic.twitter.com/EMAVUV1KvH

Moreover, he was also instrumental in the club winning the Copa Argentina. That made Tevez the first player ever to win two league and cup doubles in the same season. Additionally, he was also awarded the Serie A Player of the Year. A truly historic season.

One of the most strange times in Tevez’s career. He joined the influx of players moving to China for big bucks. However, Tevez would hardly have any impact on the field, often being too overweight or lazy to play. He managed to eke out 20 appearances in his single season, only netting four times. Tevez described his time there as a “holiday,” after returning to Boca Juniors for the third time.