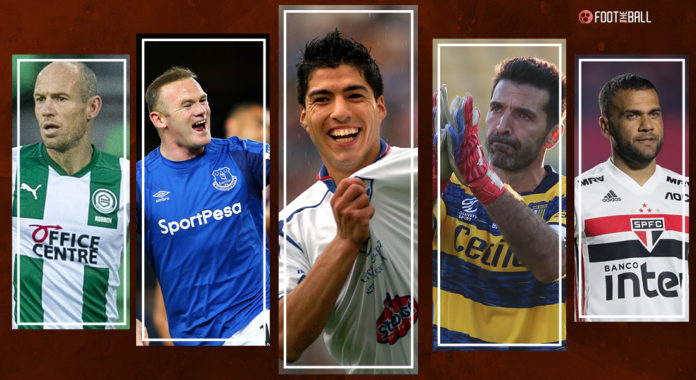 Football has never disappointed when it comes to folklores and fairytales, and that is one of the many reasons why football fans around the world call it ”The Beautiful Game”. From players coming out of retirement to take a kick at the ball one last time to a few unfortunate ones having to take early retirement due to multiple reasons, the sport has seen it all.

Even the biggest of stars had to start somewhere, be it one of the most successful clubs in the world or Sunday League football (look at Jamie Vardy). It is a great sight to see players return to their boyhood clubs – whether it’s for a one-last-hurrah or finding a new challenge – and fortunate are those who get to return where it all began!

FootTheBall take a look at the top 10 players who got the opportunity to return to their boyhood clubs at some point in their career.

Also read – Arsenal: All or Nothing

Even if he quits European football, never forget that Luis Suárez won the golden boot in the same era where Messi & Ronaldo were at their prime.#SuarezEnNacional #ElPistolero pic.twitter.com/xTY6nWMwRu

Nicknamed El Pistolero, Luis Suarez announced on his social media that he would be joining his boyhood club Nacional. After a 15-year successful spell in Europe, the Uruguayan hitman has decided to go back to his homeland and play for Nacional before he decides to hang up his boots.

The Uruguayan hitman has scored nearly 320 goals for Groningen, Ajax, Liverpool, Barcelona and most recently Atletico Madrid. The most interesting fact about Suarez is that he won the Golden Boot in an era when both Cristiano Ronaldo and Lionel Messi were in their prime – players who are recognized as 2 of the greatest footballers of all time.

When injury ruined much of 2017/18 there were doubts whether Alves could still perform at the very top. The right-back dispelled those concerns with his brilliant form for PSG, with the Ligue 1 title win helping make him the most decorated footballer in history.

Alves followed that up the following summer by captaining Brazil to Copa America glory. So many were surprised when he signed a three-year contract at Sao Paulo, returning to his home country after 17 hugely successful years in Europe.

After two full seasons in the Premier League which had brought 15 top-flight goals, Sir Alex Ferguson’s Manchester United splashed out £27m to sign Everton’s wonderkid in August 2004. Rooney spent 13 years at Old Trafford where he went on to become the all time scorer for club and country as well as winning 17 trophies.

After a season playing under Jose Mourinho at the Theatre of Dreams, Rooney returned to Goodison Park on a free transfer in July 2017. Rooney scored ten Premier League goals in the 2017-18 season which saw him play under Ronald Koeman, Sam Allardyce and David Unsworth.

Undoubtedly one of the greatest goalkeepers of all time. Twenty-seven years after leaving Parma for Juventus, Buffon returned to Ducali and is still playing professionally at the age of 44. Buffon signed a new contract in February 2022 and extended his deal with the Stadio Ennio Tardini side to 2024.

Italy’s all-time appearance maker, who has won the World Cup as well as ten Serie A titles, will be hoping to fire his childhood club back up to the Italian top-flight next season. Buffon, who won the 1999 UEFA Cup with Parma, made 26 appearances for the Italian giants in the 2021/22 season.

With an illustrious career behind him, Arjen Robben took the bold call of going back to the club where it all started – Groningen. The former Bayern Munich winger made sure the opponent team’s left-flank had nightmares about him. The Dutch winger had initially taken the decision of retirement but then decided to come back and play for his boyhood club Groningen.

However, injuries hampered his second stint with Groningen and Robben was only able to make seven appearances, from which he provided two assists.

The Argentine striker came to the fore as a force of nature for Boca Juniors in his homeland before heading to Brazil with Corinthians and then West Ham United in the English Premier League. From there he went to Manchester United, where he won the UEFA Champions League alongside Wayne Rooney and Cristiano Ronaldo.

Controversy greeted his move across town to Manchester City, where he fell foul of manager Roberto Mancini, then Italian champions Juventus. Tevez went for an even more controversial spell with Chinese Super League side Shanghai Shenhua before one last dance in Buenos Aires, where he helped Boca to the title. The Argentine forward recently decided to hang up his boots in 2022 after an illustrious career.

What is with Dutch players and boyhood clubs? We already talked about Robben – and in 2018 former Arsenal and Manchester United star Robin van Persie followed his ex-national teammate’s path by returning to his boyhood club, Feyenoord.

Van Persie excelled for Feyenoord’s youth team between 1999 and 2001 before earning a promotion to their first team. Three more years with the Dutch club paved his way to join Arsenal, where he played for eight seasons to develop into one of the most potent strikers of his time. In 2018, van Persie returned to Feyenoord and played one full season with them. He also scored 21 league goals that season, before hanging up his boots.

Torres spent five years in the Atletico Madrid first team before Liverpool paid £20m to make him their number nine in July 2007.

He had been at Atletico since 11 and became their youngest ever captain at the age of 19. In his three-and-a-half years at Anfield, Torres scored 80 goals from 141 games before Chelsea broke the British transfer record by paying £50m to bring the Spaniard to Stamford Bridge in January 2011.

After a 10-game spell on loan with AC Milan in 2014, the prodigal son returned to the Spanish capital with his beloved Atletico in January 2015 and he was part of Diego Simeone’s side that won the 2018 Europa League.

Ukraine’s best-known footballer since Oleg Blokhin had thrived under the latter man in Kiev before Western Europe came calling. He would go on to fame at AC Milan, where he spent seven years and won the 2004 Ballon d’Or, before a move to England with Chelsea.

Another stint at Milan sandwiched his time in the Premier League before he moved back to Dynamo in 2009.

It seems ages since Dirk Kuyt retired, but that is because he did so at the ripe old age of 37. The ex-Liverpool great began his career at Quick Boys FC, one of the most successful amateur clubs in the Netherlands. He played for their youth team between 1985 and 1998, before joining their first team at the age of 18.

In 2018, the former Dutch international returned to Quick Boys and played three matches for them before calling it a day. The multi-talented forward also played over 100 matches for the Dutch national team, and was a finalist in the 2010 FIFA World Cup.