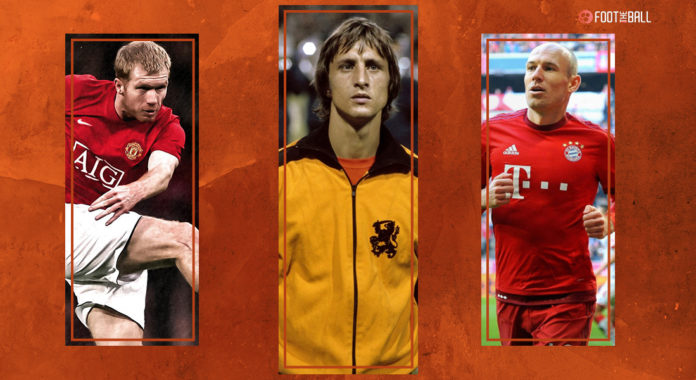 Football is a short but sweet career in every sense of the phrase. Of course, the reality of being a professional footballer is more difficult than it appears to be, especially for those not making the big bucks in the top leagues, but it is the career we all wanted to fall into as fans growing up.

A certain G.O.A.T. was one of the players to retire and then com back: His latest journey is covered in All or Nothing: Argentina

Very few are fortunate enough to make it to the professional game, so when it’s time to hang up the boots, it’s an endlessly difficult decision to make. Some legends of the game have gone on a fair bit longer, however, and this lot hung up their boots only to realise they have still got it, after all. FootTheBall lists down 10 similar players who retired from football and then came back out of retirement to play the beautiful game.

On January 8, 2012, more than six months after announcing his retirement, Scholes was named on the bench for the Manchester derby. Not even his team-mates knew he was returning before they got into the dressing room that day, never mind the shocked United fans – and media – inside the stadium.

Scholes ended up making 21 appearances in the second half of the season and then stayed on for another year as United won back the Premier League title before Sir Alex Ferguson and Scholes – for good this time – called it a day.

Lionel Messi needs no introduction anywhere in the world and the Barcelona talisman is widely regarded as one of the greatest players in history.

He has, however, been unable to translate his tremendous abilities on the international scene with his country and infamously lost three consecutive finals between 2014 and 2016. After Argentina’s loss to Chile in the final of the Copa America in 2016, a tearful Lionel Messi could not handle the heartbreak and announced his decision to never play for Argentina again.

The fact that he was just 29-years-old at the time meant that he still had plenty years ahead of him and a public appeal was launched to get the Rosario native back to the Argentina fold and Messi rescinded his decision in time to help his country qualify for the 2018 World Cup, scoring a memorable hat-trick in the last match of the qualifiers against Bolivia.

The late Dutch master returned to the game out of a sense of necessity. Cruyff was 31, but was skint after an investment that was supposed to set him up for life after football went wrong.

Did you know that Johan Cruyff threatened to retire from football in 1973 if Ajax decided to sell him to Real Madrid instead of Barcelona? pic.twitter.com/RJ04jkCqYw

“I had lost millions in pig-farming and that was the reason I decided to become a footballer again,” he revealed. He returned the same year he retired – 1978 – with the Los Angeles Aztecs for an admitted payday. Cruyff later returned to Holland and was successful with both Ajax and Feyenoord, before finally giving up the game in 1984.
Many have come and gone trying to emulate Cruyff’s philosophy – Mikel Arteta is trying to do the same at Emirates and you can catch all of it at All or Nothing: Arsenal

One of the greatest players of all time, Zico simply couldn’t shake the itch despite swapping football for politics following his 1989 retirement, and paused his new career to make a return – in Japan.

Zico dug the boots out of the loft and took them over to Kashima to join second-tier outfit Sumitomo Metals – now Kashima Antlers. He remained there until 1994 and left a legend due to the professionalism and commitment he showed during his time in Japan, becoming a Japanese footballing icon and helping to put Kashima on the football map.

The most recent case in the list of football legends who came out of retirement to resume playing career, Arjen Robben retired from football in 2019 after a highly successful spell with Bayern Munchen.

Like many of his fellow superstars, Robben had a dream of ending his career at his boyhood club and unlike many of those stars, he pursued his dream and came out of retirement in 2020 to play for FC Groningen. He was brilliant in pre-season friendlies and even scored a beautiful goal in his first game for the club, before injuring himself in Groningen’s first League game.

He came, he saw and he conquered. Zidane climbed through the ranks from Bordeaux to Juventus and finally to Real Madrid where he fulfilled his dream of winning the Champions League. Zidane’s left-footed volley in the 2002 Champions League against Bayer Leverkusen final is still considered one of the tournament’s best goals of all time.

It's Ronaldo or nothing 😤#Ronaldo #Zidane pic.twitter.com/EKBaXNVuCq

The 1998 World Cup is still sometimes called Zidane’s World Cup. His display in the tournament was prolific and his brace in the final ensured that France became world champions for the first time. The French superstar broke the news of his retirement from international football in August 2004. France had a World Cup to qualify for in 2006 and a mass retirement of seniors like Lilian Thuram, Claude Makele and Zidane himself only made the task Herculean.

Upon his coach Raymond Domenech’s request, Zidane came out of retirement to lead his side to another World Cup final in 2006. For his final act on the biggest stage, the France captain head-butted Italy’s Marco Materazzi as was sent off in a losing cause.

Claude Makelele helped reinvent the holding midfield role and was so crucial to Chelsea’s early success under Jose Mourinho that the defensive midfield position is referred to this day as the ‘Makelele role’.

He had earlier represented Real Madrid to great success but a failure to pay him commensurately to the more attacking players led to his departure and the club’s consequent demise.

Makelele was not part of France’s success at the 1998 World Cup and 2000 Euro and made his international debut in 2002, retiring two years later after Euro 2004.

He was, however, recalled to the team alongside Zidane and Thuram to help France qualify for the 2006 World Cup and his contributions with midfield partner Patrick Vieira were invaluable as their nation made it to the final.

After leaving the Gunners in 2008, the legendary German goalie was back for a second stint between the sticks for Arsenal in 2011 – a year after he put away his gloves. Initially, he was signed as a backup to Manuel Almunia, after Arsene Wenger’s team suffered from injuries.

At 42, Lehmann was called upon for a game against Blackpool, after Almunia got injured in the warm-up. His team were victorious – winning 3-1. But you can bet the competitive Jens would’ve been furious he didn’t keep a clean sheet.

Denilson was officially the world’s most expensive player in 1998 when he made a £21.5m move to Real Betis, but failed to live up to the record-breaking moniker.

His career as a journeyman winger came to an end in 2010 with Greek side Kavala. That was until he announced a shock return to the professional game in 2022 – twelve years on from his initial retirement – signing for Brazilian side Ibis at the age of 44.

The third Brazilian in the list of football players who came out of retirement is the veteran striker, Romario. The legendary striker is one of the few players to score more than a thousand goals for club and country. After a highly successful career in Eindhoven, Barcelona and Vasco da Gama Romario retired from football in 2007 at the age of 41.

However he announced later that year that he would come out to play his last game for his beloved club,  Vasco da Gama to honour his dad’s wishes. He came on in the 68th minute in his final game and helped his team to win 2-0 and clinched the title.

Whatever the reason, history is littered with several players who returned to club and international football after announcing their retirement and they will long be remembered for their contribution to the wonderful sport.