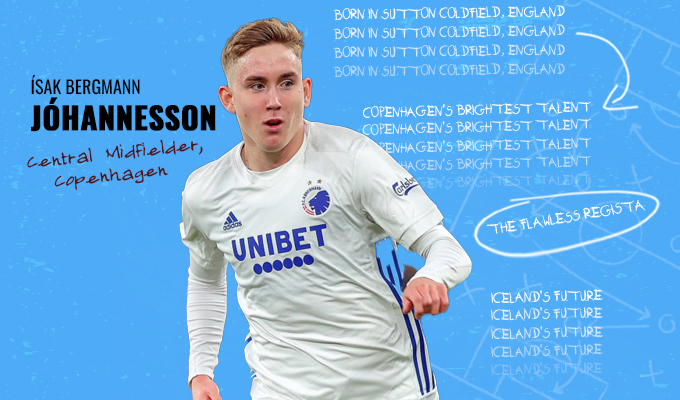 The Champions League is set to return on September 6 for the 2022-23 season. And with the Champions League group stage draws already over, every team now knows the challenge they face. At the same time, there are some mouth-watering clashes among the big teams. However, Copenhagen will be coming into the tournament with a young talented army of its own. The club already has a future star in Roony Bardghji, but Isak Bergmann Johannesson is the senior team star.

Johannesson, who is already touted as a future star for his nation Iceland has been rated as one of the best youngsters in Europe. And this season where he will be fully integrated as an undisputed starter into the senior team. The 19-year-old also has the chance to show his skills at the highest stage when Copenhagen’s Champions League campaign starts.

The Icelander already has a close link to football through his father, Johannes Karl Guojonsson. In a career that spanned 20 years, he played for clubs such as Real Betis, Aston Villa, Leicester, and Burnley,

So, who is Isak Bergmann Johannesson? And is he the successor to Gylfi Sigurdsson in the Icelandic national team?

Isak Bergmann Johannesson was born in Sutton Coldfield, England, when his father played for Aston Villa. During his time in England, he trained at Manchester City and Bolton. However, his football career started at the Icelandic club Iþrottabandalag Akraness. After breaking into the senior team in 2018, he performed brilliantly in his first season.

This prompted Swedish side IFK Norrköping to snap him up. The Swede was the team’s creative force at just 16 years and helped the team finish fifth and sixth in consecutive league seasons.

His two seasons at the club would generate interest from top European clubs. However, he would reject them all to join the Danish club Copenhagen. And while Copenhagen may not be one of the top clubs in Europe, it was one where he would get ample play time.

The 17 years old Icelandic has been getting more and more attention which is not a surprise seeing his class performance throughout the season. I tried to highlight his strengths and weaknesses, backed-up with data as well.

He would win the Danish Superliga with the club in his first season. And he would also get to show his talent on the European stage as Copenhagen played in the Conference league, where they reached the Round of 16.

And now he has the chance to showcase his talent at the top level. Copenhagen are also in a competitive group. The Danes have been drawn with English champions Manchester City, Sevilla, and Borussia Dortmund. While the draw may have been unfavourable to the team, it will give Johannesson the chance to play with the best. One of those matches will be against Kevin de Bruyne, a player he idolises.

Can Arsenal challenge for the Premier League following their impressive start?

When Johannesson joined IFK Norrköping, great things were expected of him. However, he went beyond that in terms of performance. The Icelander scored three goals and provided ten assists in 2019-20. The teenager was the creative force for the team and got the club consecutive finishes in the league’s top half.

At Copenhagen, he was instrumental in their campaign scoring eight goals and providing three assists. Out of this, two goals and two assists came in the Conference League. His performance against Gibraltarian side Lincoln Red Imps was among the best in his career. In a 4-0 away win, Johannesson scored one goal and provided two assists. His goal highlighted his positional sense as he stood on the edge and immediately made a late run to latch onto a loose ball inside the box.

He was among the top players regarding forward passes, through balls, and key passes.

Despite being born in 2003, Ísak Bergmann Jóhannesson has shown he is one of the league’s best, most versataile, and most consistent players. Big European clubs are looking at him and most likely are impressed by his last pass 🎯
Assist ratio and assist map 2020-2021 below 📈 pic.twitter.com/7rg12aiXY7

Isak Bergmann Johannesson is an out-and-out Regista who loves to create chances. In an interview with Goal, the Icelander stated that he loves assists more than goals. Most of his action also comes on the left side of the midfield when he plays in a three-person midfield. However, Johannesson’s versatility helps him play on the wings when the team needs it.

He is also an adept dribbler and can draw defenders out of their space to make space for his teammates. And while Johannesson is already a gifted player, he can take his skills a level or two. The Icelander has a large frame at 1.84 metres but lacks the physicality as he is still young. However, if he manages to bulk his body up, he could be a nightmare for the opposition’s defenders.

Johannesson needs all hands on deck this season as it will be the toughest one of his career. The pressure on him will increase as he is now expected to be the creator-in-chief. If he can perform consistently, especially in the Champions League, a move to a top club could come as early as next season.

Fists, Brawls and Spat: Check out the top 10 fights in football

There is no question about Johannesson’s talent. He can create, score, dribble, dazzle, and keep his team on top of the game. At just 18 years, he is one of the hottest talents in world football. However, one area of his makes him a top player, which isn’t talked about often.

It’s his maturity. He was a player being chased by Juventus, Liverpool, Manchester United, and Real Madrid. But he chose Copenhagen. The reason was simple: he wanted a club where he would get ample game time, which the top clubs couldn’t offer him. It was a brave decision for a teenager, but it also showed his maturity. And this reflects in his playing style as well. While the raw skills of a player can be refined by practice, some skills come naturally.

Instinct is one of them. A world-class footballer has instinct, and that cannot be taught. They either have it, or they don’t. And Johannesson has a killer instinct that helps him create chances out of nothing. This is a rare commodity and one that makes him unique.

The Icelander has already made a name for himself in football. Johannesson has already racked up 13 appearances for his national team. The amount of football and exposure he has got at such a young age has done wonders for him. Johannesson is a player who plays better and better with more game time.

Copenhagen also has a brilliant, fearless young team with nothing to lose in the Champions League and could be one of the tournament’s dark horses. The clubs are already circling to snap up Roony Bardghji, and it is a matter of time before they come to Isak Bergmann Johannesson.