Gunning for the PL? 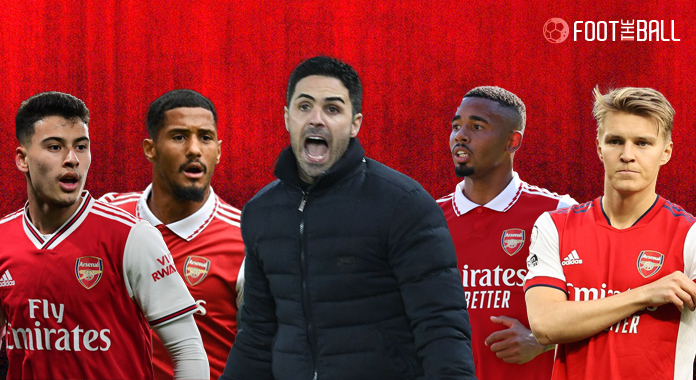 After the opening three matches in the 2021-22 season, Arsenal were dead bottom of the Premier League. Mikel Arteta’s men had conceded nine goals and scored none as fans were frustrated with lacklustre performances. So, what happened in the next season? Well, after three matches, Arsenal were top of the league table with three wins and 9 scored. After extending their winning streak to five games, they lost to United but the performance was encouraging. Are Arsenal title contenders? Is Mikel Arteta now among the best young managers in football?

The Gunners have had a brilliant transfer window that has helped them strengthen their squad. Gabriel Jesus has been the best signing, providing endless energy and spark up front. The signing of Fabio Vieira and Oleksandr Zinchenko has also increased Arteta’s options. Arsenal have outplayed the opposition in every game this season. Even the United loss was a game where the 3-1 scoreline didn’t reflect the status of the game. They came right back like true contenders in the next game, beating Brentford 3-0.

However, while the mood at the Emirates is rosy, the real question is can they deliver these performances consistently? Are Arsenal a legitimate title contender in an already unpredictable Premier League season?

Arsenal’s amazing start to the season

Arsenal had a very competitive squad coming into the season. While their transfer activity was brilliant, they also had other options. William Saliba, who returned from an impressive loan spell, has strengthened the defence, their weakest area. While it has only been seven matches, Arsenal looks like a proper side in a clear system with a driven group of players hungry for success.

Last season, the Gunners were unpredictable; they would either win with an impressive performance or display a forgettable performance in a loss. They only drew three matches in the entire season, which showed their brittleness. Arteta also encouraged a high-pressing style which did not always work as the team took time to adapt to the demands of his system.

3 – Arsenal are the first top-flight side to win their opening three league matches the season after losing their first three since Everton in 1937-38 and 1938-39, with the Toffees going on to win the title in the latter of those seasons. Harbinger? pic.twitter.com/2V6tZLPFTb

By the end of the season, the team were playing more fluently, winning five of their last seven matches. However, the team still lacked quality which only the transfer market could solve. And despite their failings in the previous windows, Arsenal managed to get some brilliant players.

Gabriel Jesus has been brilliant and is a significant upgrade on the now departed Pierre-Emerick Aubameyang. Similarly, Zinchenko offers Arteta the qualities of a left-back and a central midfielder. In addition, Fabio Vieira is a perfect substitute for Martin Odegaard, and William Saliba has transformed Arsenal’s defence.

He is tireless and he scores tons of goals. Check out Napoli’s star Giacomo Raspadori

So, what does the form sheet say? After seven matches, Arsenal scored 17 goals. More importantly, their goal tally is not a fluke, as evidenced by their xG (Expected Goals) number of  14.45. This clearly proves that the Gunners are playing a sustainable form of attack. Their form is down to their quality, not luck or outliers. Therefore, this can be expected to continue.

However, the reason for Gunners’ rise has been their improved defence. While Arsenal may not have had the best attack last season, the defence was their Achilles heel. Arteta’s men were repeatedly caught on the break and were cut down by the opposition’s counterattacks. While this problem reared its head once more against Manchester United, Arteta’s Arsenal have been all about evolution. He will undoubtedly learn from this and ensure a repeat doesn’t happen.

In addition, Arteta’s playing style encourages build-up from the back, an area where the defence struggled. However, Saliba is the perfect defender for such a system. Last year, in Ligue 1, Saliba was the fourth-best player in the Expected Threat (xT) metric. He also made 3044 passes in the season, the most for any player and 490 more than his nearest rival.

With Saliba in defence, Arsenal have looked much more assured in defence. They don’t concede many shots and the ones they do are usually low-quality potshots. While it is still early in the season, Arsenal have shown that, at the very least, they are one of the favourites for the third position. However, they will face an immense challenge from Antonio Conte’s Tottenham, who executed the best transfer window in their history, Manchester United in their recent form and Chelsea if they can find their groove. But are Arsenal title contenders?

Looking for the next big football star? Presenting to you Roko Simic, RB Leipzig’s killer poacher

After five matches, it looked like nothing could go wrong for Arsenal. The team performed flawlessly, with each player executing their role perfectly. They had priceless contributions from a new player every game, be it Jesus, Odegaard, Saliba or another. The presence of various prominent game performers made Arsenal a lethal side.

Then came the Manchester United game. Arsenal hadn’t faced a team in the top half of the table since the beginning of the season. The way they capitulated to the same old problems on counter-attack showed that while Arsenal are on the ascent, the “Arsenal title contenders” narrative looks to be coming too soon, at least this season.

It is because while Arsenal are the top dogs on form and points, the answer to consistency is the one they need to solve. Liverpool and Manchester City have been consistent on almost an unprecedented level to establish a duopoly in the league.

And this is where Arteta will have his sternest challenge. Manchester City have signed Erling Haaland, which has made them even more dangerous. And while Liverpool may be having a terrible start to the season, hitting Bournemouth for NINE showed Klopp’s men are going nowhere.

Arsenal are a brilliant side but still are a level or two below City and Liverpool. So, while they could get third place, and if they manage to build on it by adding three to four world-class players, Arteta could look to win a trophy that has eluded the Gunners for almost two decades.