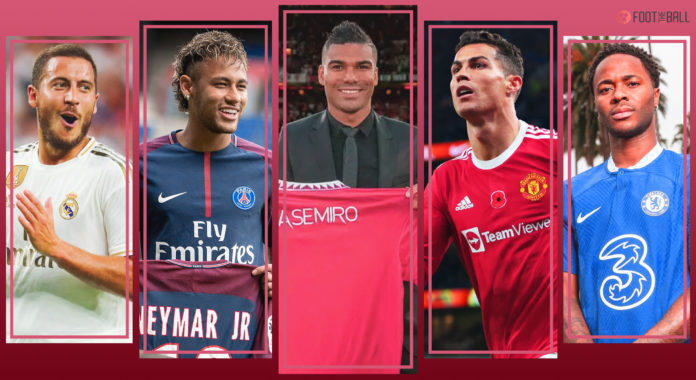 Some of the top transfers are the € 100 million transfer was of Aurelien Tchouameni to Real Madrid. Another big signing was the € 95 million signing of Antony from Ajax to Manchester United. Wesley Fofana became the costliest defender as Chelsea shelled out € 100 million for the centre-back. Chelsea also spent € 63 million to sign Marc Cucurella.

Chelsea were the highest transfer spend in the summer transfer window followed by rivals Manchester United who also spent excessive fees on signings such as Casemiro(signed from Real Madrid) and Lisandro Martinez (signed from Ajax).

Then there is Nottingham Forest, who broke the English transfer record by signing 21 players; yes, you read that right, 21 players. The newly promoted club spent € 169.90 million to increase the quality of their squad.

So, which are the top ten biggest single window transfer spend in football?

After finishing an impressive seventh place in the Premier League last season, the Hammers have gone all out to improve. David Moyes has added quality by signing players such as Gianluca Scamacca, Lucan Paqueta, Nayef Aguero, and Maxwell Cornet. They have also signed Emerson, Thilo Kehrer, Flynn Downes, Alphonse Areola, and Nathan Trott.

However, Moyes is still struggling to incorporate the signings into his team. The team has only won one match and are 14th in the table with only four points. West Ham have also scored two goals, the joint-least in the league.

However, the season is still early, and David Moyes still has time to turn things around at the London Stadium.

The 2017 transfer window was not only costly for Barcelona but also had dire consequences, whose effects are still felt today. In fact, the start of Barcelona’s decline that has now led them to activate ‘economic levers‘ can be traced to this window. The window was going fine till Paris Saint Germain decided to activate Neymar’s € 222 million release clause.

This left Barcelona with lots of cash which they spent on Ousmane Dembele, Paulinho, and Nelson Semedo. This would start an era of exorbitant spending by the club in the following windows that almost got Barcelona bankrupt. This ended after former club President Josep Maria Bartomeu announced his resignation in October 2020.

I know a lot of people talk about our 2017/18 transfer window but i would like to point everyone towards Barcelona's signings that year.. pic.twitter.com/TNjR6BE2eL

Pep Guardiola’s first season at Manchester City was nothing exceptional. The club finished third in the league, 15 points adrift of winners Chelsea. In addition, they also lost to AS Monaco in the Champions League Round of 16. And thus, in the summer of 2017, City went on a shopping spree.

The club added big signings such as John Stones, Leroy Sane, Ilkay Gundogan, Gabriel Jesus, and Claudio Bravo. Even their lesser-known signings, such as Oleksandr Zinchenko and Geronimo Rulli, established themselves as stars.

The spending immediately affected them as they won the Premier League and the League Cup.

At the end of the 2017-18 Serie A season, Juventus had won their seventh consecutive Serie A title. However, continental success continued to elude them as they lost two Champions League finals in three years. And thus, Juventus went all out.

The Italian club signed Cristiano Ronaldo, Joao Cancelo, Douglas Costa, Leonardo Bonucci, and Emre Can. Ronaldo was the primary signing, with the Portuguese costing the Italian club € 117 million. At the same time, they continued their Serie A dominance and also won the Supercoppa Italiana. However, the Champions League wouldn’t come.

Ultimately, Cancelo and Ronaldo would depart for Manchester United and Manchester City, respectively.

It can be argued that it has been one of the most successful transfer windows ever. Yet, by 2009, Real Madrid had failed to qualify for the Champions League quarter-finals for the fifth consecutive campaign. What happened next? In came, Cristiano Ronaldo, Karim Benzema, Kaka, Xabi Alonso, Alvaro Arbeloa, Alvaro Negredo, Raul Albio, and Ezequiel Gray.

Second most spent in a transfer window in history.

Ronaldo’s signing was a world-class transfer for which Real Madrid paid € 94 million. Benzema also had a successful career and is still working his magic, helping Los Blancos win five Champions League. Safe to say, Real Madrid got their investment return and then some.

The current season has been a case of ups and downs for Manchester United. The transfer window started with the signing of Tyrell Malacia. This was followed by the transfer of Lisandro Martinez and Christian Eriksen. However, losses in their two opening matches spurred United into action.

Casemiro was signed from Real Madrid to bring steel into the midfield. And then United would pay Ajax € 95 million for the transfer of Antony. United already have three consecutive wins without these two, which shows that Erik Ten Hag is finally starting to mould the squad to his liking.

This vast transfer window spending was majorly due to one player. In 2017, Paris Saint Germain (PSG) would change the transfer market forever. The French club would spend € 222 million to activate the release clause of Neymar. It is still the costliest transfer in football, even after five seasons.

The only other paid transfer was Yuri Berchiche, who was signed for € 16 million. In addition, Dani Alves was brought in on a free transfer. In addition, Kylian Mbappe was also signed on a one-year loan deal with the option to buy at € 180 million a year later, which PSG opted for at the season’s end.

The transfer spend that started in 2017 with the sale of Neymar reached its zenith in the 2019-20 season. Barcelona made their internet clear at the start of the 2019 season by spending € 200 million to bring Antoine Griezmann and Frenkie de Jong. Other players to arrive included Junior Firpo, Pedri, and Martin Braithwaite.

🚨 On the evening of the Antoine Griezmann transfer in 2019, Barcelona realised they did not have the money to fund the move and they needed to find €120m urgently.

However, Barcelona would have a disastrous season and failed to win the La Liga. But, their lowest point would come in the Champions League, where a rampant Bayern Munich would hammer eight goals past them in the quarter-finals.

The season would end with Lionel Messi handling a transfer request.

The Blues are having a terrible start to their season after finishing a distant third last year in the Premier League. Thomas Tuchel was sacked midway through the season and Graham Potter was brought on board. The Blues are 10th in the league and look like a side in crisis. However, new owner Todd Boehly has left no stone unturned in bringing in new players.

Fofana has been signed for a world-record fee, and the club added Cucurella and Napoli’s Kalidou Koulibaly to strengthen the defence. In addition, the signing of Raheem Sterling will give Chelsea an edge in attack. On the deadline day, the Blues added Pierre Emerick Aubameyang and Dennis Zakaria. However, what effect will they have remains to be seen.

In the summer of 2019, Real Madrid were loaded with cash. Los Blancos had not spent a large amount of money in the transfer market for years. Furthermore, their 2018-19 campaign was a disaster as they failed to land any significant trophy. So, Madrid spent upward of € 300 million to improve their squad.

Eden Hazard, Luka Jovic, Eder Militao, Ferland Mendy, and Rodrygo were all part of the summer acquisition. However, while Militao, Mendy, and Rodrygo are still part of the team, with the former two being undisputed starters, their two costliest stars have failed to perform. In addition, Hazard has been marred by injuries and has failed to be fit for most of his stay at the club. While the team won the La Liga and Champions League this year, the Belgian didn’t play a major part in both campaigns.