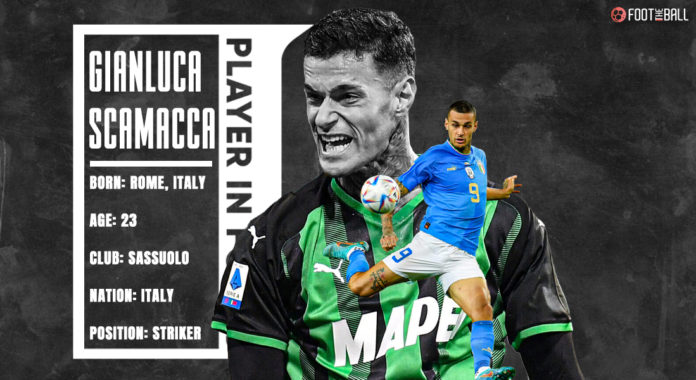 The transfer market is always a great indicator of how a player is valued. In that regard, Gianluca Scamacca is turning eyeballs. The 21-year-old forward with Sassuolo had a breakout 2021-22 and is now moving to West Ham United.

The Hammers look set to beat out heavy competition from PSG to add the coveted forward to their team. No doubt, the shortage of top-quality, young strikers has also helped his cause.

Paul Pogba returns to Juventus, and here’s why that is good for everyone concerned

Sassuolo have continued the tradition of producing top talents and selling them when the price is right. The question remains, why there is so much hype around a player with one really good season? It is time to dig deeper into Scamacca and his journey till here.

Gianluca Scamacca has really developed into a classic number 9, who can do a variety of things. His 6’4″ frame is ideal for holding up play and winning aerial battles. Moreover, Scamacca is also adept at making driving runs forward, alongside taking shots from distance.

Sassuolo were the highest-scoring team in the second half of the table with 64 goals. Additionally, they were the sixth-highest scoring team in the whole of Serie A. A big part of that was Scamacca, who had a hand in one-fourth of the total tally. Scamacca’s tall frame also comes in handy on the defensive side of things.

Scamacca and Italy will be be big misses at the 2022 FIFA World Cup. Here is where their 2014 squad are now

Sassuolo signed him in 2017, before loaning him out to four clubs in the next four years. Those experiences have certainly shaped Scamacca into the player he is today. Moreover, Sassuolo have great wide players in Domenico Berardi and Giancomo Raspadori who are perfect sidekicks.

They are expertly able to find Scamacca, who finishes off chances in style. Sassuolo have played with a 4-3-3 or 4-2-3-1, with Scamacca playing as the central option. The team trusts him enough to lead the line and score goals, while the midfield cover up behind.

Therefore, there is no doubt as to how effective he is in the final third of the pitch. Scamacca can improve his passing accuracy which was an average 74.6%. Granted, he is not expected to do the bulk of the heavy passing, but it is always good to have a better opportunity of finding teammates.

Moreover, he only attempted 11 crosses, which is way lower than other strikers in the league. That just speaks of his team playing him only centrally. Scamacca did not register any assist in the season, which is something that will need polishing in his game. Generally, strikers do tend to set up chances too. It is especially expected of a modern striker.

He only created 25 chances across the season. Scamacca is also a keen dribbler, completing 70% of his dribbles, while also winning more than 56% of his aerial battles. These are the abilities that really define him as an all-round striker.

As mentioned above, Scamacca has several strong qualities which will only get better. The player has been an Italy youth international since 2014 with the U17s. He has progressed through the different age groups all the way up to his senior team debut in 2021.

However, there are certain things that he does need to evolve. The zero assists have to be corrected in 2022-23. No top club will be confident in having a player play up top alone who cannot get assists. Furthermore, Scamacca conceded 49 fouls in 2021-22, 29 more that what he received.

Therefore, discipline is an issue with the young talent. No doubt, Scamacca is a heady character, which will be corrected with age. He still has a lot to learn, after one breakout season. Sassuolo have been pleased with the progress shown, and are ready to sell him for big money.

Given the general shortage of strikers in the 2022 window, Scamacca’s value has ballooned a bit. Sassuolo have accepted a bid of €36m plus €6m in add-ons from West Ham, with PSG unwilling to match the offer.

He is now set to join Michail Antonio as the two out-and-out striker options for David Moyes. This is important for the side as they aim to make Europe once again. The Hammers have been punching well above their weight, and adding Scamacca is a real sign of intent.

Scamacca represents a good choice, as he is young and first the profile of players whom Ten Hag can shape. The future seems bright for Scamacca, and the next steps are crucial.