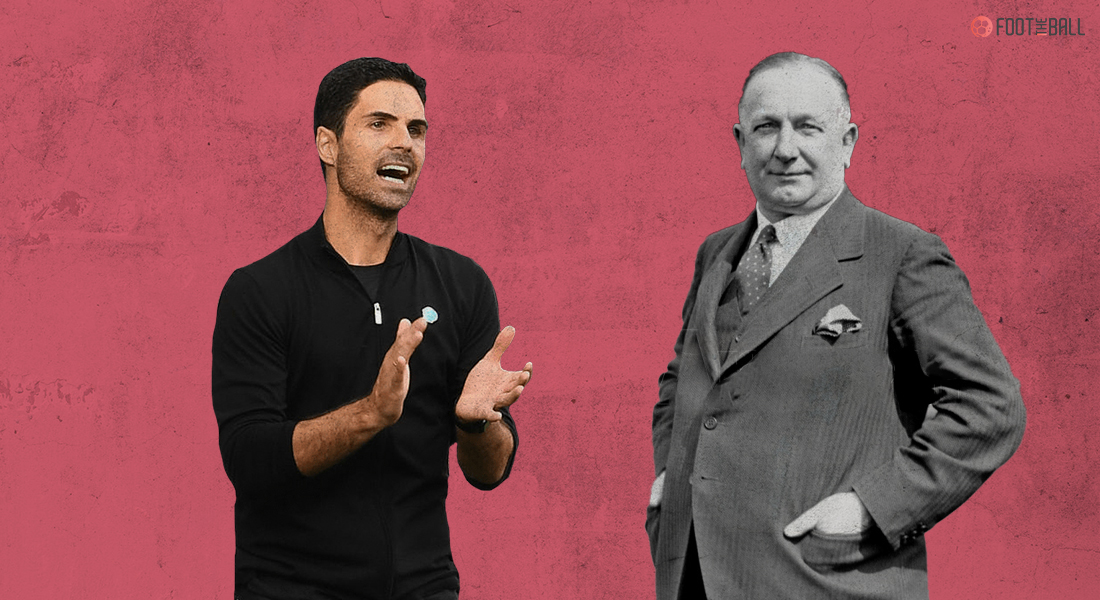 A shambolic start to a Premier League campaign, Arsenal have been disastrous in their opening three fixtures of the Premier League. Mikel Arteta’s men started their campaign with a defeat against the newly promoted Brentford.

Then North London rival Chelsea thrashed them at the Emirates as returning hero Romelu Lukaku bullied Arteta’s backline. After losing to the European champions, Arsenal faced the reigning Premier League champions Manchester City. Once again Pep Guardiola defeated his managing disciple Mikel Arteta, as the Gunners were humiliated 5-0 at the Etihad.

While the Arsenal fans started cheering Manchester City after the Gunners had conceded 4 goals, the world pondered when was the last time Arsenal kicked off a campaign in a similar fashion. Way back in 1954, Arsenal lost their opening three fixtures finishing 9th at the end of the campaign. We relive the memories of the catastrophic start of Arsenal 67 years ago.

The last time Arsenal kicked off their campaign in such a disastrous fashion was way back in 1954. Under the command of manager Tom Whittaker, the Gunners faced consecutive losses. The first defeat came in the opening fixture against Newcastle where they were demolished 3-1 at the Emirates.

Scottish winger Bobby Mitchell smashed a brace as Arsenal couldn’t handle the pressure of the electrifying winger. English forward Doug Lishman did get a goal back for the home team but it was too little too late for the Gunners, as they were on the verge of losing their opening fixture.

#OTD 1951 ⚽️ Football supporters queue to get the train at Arsenal underground station after the Gunners had beaten #Rangers 3-2 in a Floodlight Friendly fixture at Highbury.

A crowd of 62,102 watched a brace from Doug Lishman and another by Walley Barnes claim the spoils. pic.twitter.com/pMbrFklj9T

The Gunners faced Merseyside side, Everton, next in a mouth-watering clash at the Goodison Park. The spectators expected Arsenal to brush aside The Toffees considering the stature of the North London outfit. But to everyone’s shock Everton produced a magical result beating the Gunners 1-0. Irish winger Tommy Ellington spoiled Arsenal’s party scoring the all-important goal of the match securing a win for the home side.

Two losses on the trot saw Tom Whittaker being thrown under immense pressure as the Gunners fans waited for their first victory of the new English League campaign. Arsenal travelled to West Bromwich Albion next and anything less than three points could have seen Whittaker lose his managerial chair at the Emirates.

The Baggies and the Gunners were in an identical position as both the clubs were desperately looking for their victory. West Brom entered the contest after facing two defeats against Sunderland and Newcastle United. The Baggies had conceded 7 goals in just two games as they looked to solidify their defence before facing Arsenal.

After a hard-fought contest Arsenal once again succumbed to a defeat losing 3-1 to West Brom Albion and losing three consecutive games. The spectators at the Emirates were left frustrated and wanted results otherwise a total turnaround could have been possible.

Fortunately for Whittaker, the Gunners defeated Everton and then Spurs as the manager earned back the faith of the administration and the fans. Throughout the season defending wasn’t the biggest point of concern for Arsenal as they conceded just 63 goals. Only two other teams in the top-10 had conceded the least goals with champions Chelsea being one of them.

1954-55 – Arsenal have lost their first three league matches in a season for the first time since the 1954-55 campaign. Problems.

The Gunners failed in the attacking department as they managed to net just 69 goals putting them far behind the likes of Manchester United and Manchester City. Another factor was Arsenal failed to win games against the ‘Big 6’ of the Premier League.

Liverpool was in the second division in the 1954/55 season and Arsenal encountered just 5 teams out of the Big 6 throughout the campaign. Out of the 8 games played against Chelsea. Manchester City, Manchester United, and Tottenham Hotspurs won just three games, drew one, and lost the remaining four.

HOW DID THE SEASON END FOR THE GUNNERS?

When you lose your three opening fixtures it seems impossible to revamp from that and emerge as the Champions of the land. The same happened with the Gunners as the three defeats put them way behind their rivals.

While Manchester United, Chelsea, and Tottenham Hotspurs were on a winning momentum, Arsenal was struggling to register their first points. Arsenal’s 1954/55 start was identical to the start under Mikel Arteta this season.

The pressure on Tom Whittaker increased as Arsenal were expected to perform exceedingly well in domestic tournaments. And why won’t these expectations shroud the Emirates? Manchester City, the reigning champions, were an average outfit back in the day, while the Red Devils and the Gunners had a neck-to-neck rivalry.

Although Whittaker and company shrugged off their initial defeats, emerging victorious against North London rivals Tottenham Hotspurs in their 5th fixture. But the winning momentum never arrived, as they started losing games once again. The problem with the Gunners was they couldn’t win three games on the trot until March putting them far behind in the table.

But when March arrived Arsenal enjoyed a winning momentum beating teams week in and week out. While you could question the quality of the opposition, Arsenal still managed to win seven consecutive games putting some pressure on the teams above them.

Unfortunately, after the 2-1 bashing of Cardiff City, the Gunners lost their touch and finished the season with three defeats out of their four games. They could only accumulate a single point in the last four games, finishing 9th in the league. Arsenal won 17 games, drew 9 games, and lost 16 games out of their total tally of 42 matches.