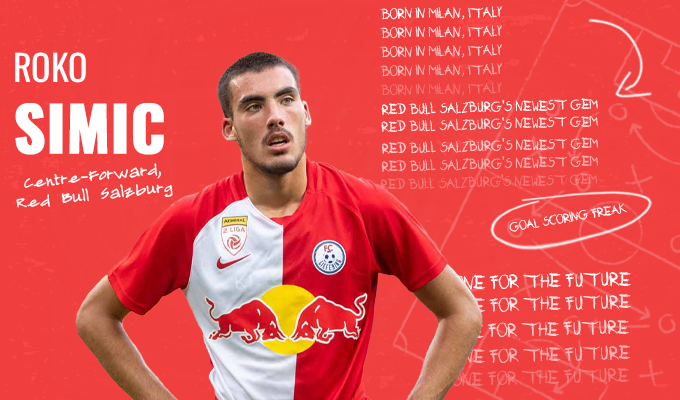 In football, some clubs have become a ‘conveyor belt of talent’. These clubs are experts in developing some of the best young talents, and Red Bull Salzburg is one of those clubs. Over the years, the club has developed Sadio Mane, Dominik Szoboszlai, Erling Haaland, Joshua Kimmich, Dayot Upamecano, Karim Adeyemi, and Patson Daka, who all have become well-established stars. Mane signed for Bayern Munich this season while Haaland went to Manchester City, where they are the undisputed stars. And the Salzburg conveyor belt shows no signs of slowing down with Roko Simic, their latest star.

The 18-year-old plays for Liefering, the reserve team for Salzburg, where he scored goals for fun last season. Simic has been compared with Haaland, who also played at Salzburg before going to Borussia Dortmund. The Croatian is seen as a part of the club’s future and has all the traits of becoming an elite fox in the box.

He is the son of Dario Rimic, a veteran defender who won multiple trophies with AC Milan, including one Serie A and two Champions League. He also finished third with Croatia in the 1998 FIFA World Cup.

But, who is Roko Simic? And is he the next star to come out of Red Bull Salzburg?

Born in Milan, Italy, Roko Simic started his career at Dinamo Zagreb before spending four years at NK Kustosija. In 2015, he would join Lokomotiva Zagreb, rising through the ranks and making his debut for the senior side on August 16, 2020.

In his first entire season with the club, Simic scored four goals, including a brace against NK Varazdin. Roki Simic was only 17 then and had announced himself in style. Simic would add two more goals, but his performances were enough to warrant the interest of RB Salzburg.

Roko is the son of a former Inter and AC Milan player Dario Šimić. pic.twitter.com/usqaJojPFy

The Austrian club moved quickly, snapping him up for €4 million, a record transfer for Lokomotiv. After signing him, the club immediately sent him to Liefering, their feeder club. While many players would have taken time to adapt to a new league, Simic is a different beast.

The forward was one of the top performers in the league, helping the club to a seventh-place finish. A performance of this level was enough for Salzburg to keep him for this season. And he has already made an appearance as a substitute against TSV Hartberg.

Matheus Cunha is the super sub that Manchester United need

While Simic could only manage four goals in his first senior season, he went several levels above in the next season. Despite loaning him, Salzburg had initiated a clause in his contract that allowed him to play for their under-19 team in the UEFA Youth League.

Simic scored 19 goals for Liefering, the third-highest in the league. He was responsible for more than one-third of the team’s goals after scoring just two goals in his first six matches. However, his form would pick up, scoring five goals in the next four games.

At the same time, he was also setting the stage on fire in the UEFA Youth League. Roko Simic scored seven goals, becoming the top scorer along with the Midtjylland duo of Mads Hansen and Aral Similar. Like the league, Simic scored decisive goals against top teams such as Sevilla, Paris Saint Germain, and Atletico Madrid. He was instrumental in Salzburg’s run to the final.

He was not only scoring goals but also providing assists, especially in the UEFA Youth League and was also an efficient dribbler, skills he had already shown back in Croatia.

I really like the profile and playing style of Oumar Diakité. Physically mature, direct, beautiful technique, and a very well off-the-ball movement.

Also, Roko Šimić continues to show his killer-instinct in-front of the goal. He already has scored a brace. 2:0. #AtletiSAL #UYL https://t.co/1ieKx42rTK

Roko Simic is a modern-day forward who is adept at different attacking skills. While he is a goal-scoring freak, Simic is also excellent in the build-up play. He is fast, holds the ball well, and has excellent vision. What is more impressive is that he has managed to develop so many skills at just 18.

Simic has also managed to perform at various levels and has shown that he can deliver when the going gets tough. His path till now mirrors that of Haaland and Adeyemi, who are now the undisputed starters for their respective teams.

If he manages to keep the level of his performances at Salzburg, he will surely be on the transfer wishlist of several European clubs. He will also be working under Matthias Jaissle, his coach at Liefering. Jaissle is also famous for giving young players a chance, which would immensely benefit Simic.

While analysing a player, one generally looks at stats, not other situations surrounding the players. Simic is a brilliant player whose stats back his claim. However, what makes his rise more prominent is his ability to adapt.

Moving to a different country at just 17 years is a considerable risk. And then performing that way he has is even more challenging. So, his mental toughness is what makes him special. He scores so many goals, most of them in decisive situations.

Simic has also proved himself to be one of the best in the UEFA Youth League, which houses the best young talents in the continent. Several players who starred in the tournament established themselves in top football teams.

Simic’s footballing career has been on the right path till now. However, he now faces his biggest challenge performing consistently in a top league. It is a path that many have taken before him and gone on to do bigger things in the game.

If we see RB Salzburg’s track record of developing youngsters, we can be assured that Simic’s career is in the perfect hands. Moreover, with Salzburg, he will also get the taste of the Champions League which will immensely help in his footballing career.

Red Bull Salzburg have made a name for themselves as one of the best smartest clubs in the league. And they would like to keep their conveyor belt of talent going by making Roko Simic a world-class player, a feat they have achieved many times before.