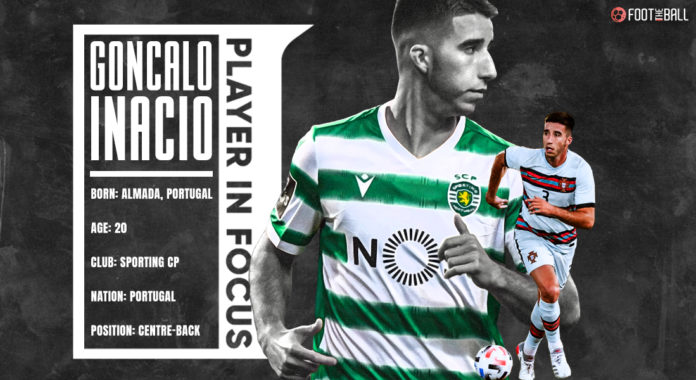 Ruben Amorim’s Sporting CP may not have defended their Portuguese Primeira Liga crown last term, but they remain one of the most exciting teams in world football right now.

In addition to boasting one of the top young coaches in the world, Sporting still have a strong core of young players, many of which graduated from their famed academy. One of these players is their excellent young centre-back, Goncalo Inacio.

No role in modern football is as difficult to perform as a centre-back. For most teams, central defenders are the starting point of their attack and are required to be accomplished and effective on the ball both through dribbling and passing.

As more and more teams across the continent adopt high-pressing systems, today’s centre-backs are required to be capable of resisting pressure from an opposition press when building from the back, mobile enough to cover in behind if the press is broken, and aerially dominant to stop the opposition from performing long raking balls over the top.

Given the variety and difficulty of these tasks, talented centre-backs who perform these actions in abundance are seemingly always in high demand. And for obvious reasons, Sporting’s Goncalo Inacio is one of them.

How good is Goncalo Inacio?

The Sporting man started his career at local club Almada, before moving to Sporting Academy. He had his first professional start on 6 June 2020. He primarily plays as a left-sided centre-back, but he doesn’t have any problem playing in either right-back or right centre-back position.

Goncalo Inacio is the instantiation of a ball-playing centre-back. Primarily a ball carrier, he is good with both feet – with the left being his dominant, exceptional at reading space around opponents when ball-carrying, and has the perfect physique to be a mobile and incredibly agile central defender.

When in possession of the ball, he constantly scans his surroundings to find the best available pass. Not only is he safe when distributing, but when given the opportunity and freedom to, he is capable of dissecting opposition lines with progressive passes and picking his more forward-thinking teammates in more dangerous areas of the pitch.

He is also a telling long passer. If you need any evidence check out his incredible assist for Pedro Gonçalves last season, picking up the ball deep in his own half before playing a superb long-raking pass for the forward to comfortably slot home past the keeper. Additionally, one other element Inácio is incredibly competent at is his ability to carry the ball forwards, evading pressure and driving his team up the pitch whenever possible.

For a player as young as he is, you’d think he’s the more experienced centre-half rather than his partner at Sporting, Coates, in that he is incredibly brave in possession and has no qualms in trying to dribble and onrushing presser and bypassing him. He is very adept and deceptive when performing these attributes. Opposition attackers will think he is going one way, but he will then swiftly manoeuvre himself to go another direction.

It’s worth noting that the 20-year-old is arguably his team’s primary outlet for progressing the play and, in some instances, can even be a creative outlet, a la the forgotten role of Libero in football.

In 28 starts last season, the defender had registered six goal contributions, with four goals and 2 assists.

Per game, he records 84.1 touches highlighting just how crucial he is to Sporting’s possession play and also representing the fact that from deep, he is partly their main source of ball progression, registering 0.3 key passes per game whilst also successfully completing 91% of his passes – the fifth-highest passing rate in Liga NOS.

An incredible statistic especially for a player so young which means he is certainly capable of translating that to the big leagues in the future if provided the freedom and opportunity within a progressive system.

For long balls, the Portuguese man performs them at a rate of 4.4 per game with a success rate of 62%, another impressive underlying statistic. Again, when given the opportunity, he’ll attempt a long-ball to find his attacking in more dangerous areas or more importantly when making off-the-ball runs behind defensive lines.

His positional sense and the team’s advanced position allow him to have a great contribution to their attack. He performs 26.7 passes per game in the opposition’s half with a success rate of 86%. He can easily hold onto the ball and deliver it to the advanced areas and has a passing range that allows him to make combinations with his teammates and exploit spaces.

In his defending stats, the Portuguese again excels tremendously. He’s contributed to 13 clean sheets for last season’s champions, all while registering 0.9 interceptions, 1.4 tackles and 2.3 clearances per game. He is a highly engaging and combative defender. He’s won 56% of his total duels and 61% of his ground duels.

Aerially, he’s quite respectable in that area winning 49% of his aerial duels which doesn’t scream that he is one of the best, but its vitally important to take note of his age and the fact that this is only his second campaign playing top-flight football, the stats he has managed to accumulate is very impressive considering. Again with more refining and development in his game, he will only become more well-rounded and complete in his defensive work.

Sporting manager Ruben Amorim often gives Inacio the license to push forwards and roam as a centre-back in possession, much in the way Rio Ferdinand used to regularly do during his decorated days as an Old Trafford centre-half.

If you can break a team’s first initial branch of pressure with your centre-back, you can surely pose problems for them in deeper defensive areas, unbalancing them structurally and opening gaps that can be exploited by more advanced teammates.

At times though, Inacio sometimes invites opponents towards him in or­der to beat them, but this makes any potential pass out of trouble more difficult – something he’ll need to be wary of if he does make the move to a bigger European division.

Defensively though, the Almada-born defender is incredibly sound. Standing at 6 foot 1in, he may not be as physically imposing as his defensive partner Coates who is 6’5, but he is very good at utilising his frame and positioning to quickly engage his opponents and win possession back for his team.

He is also very good at deviating from his backline shape and engaging attackers when they least expect it. In fact, while Coates will cover in behind him, the Portuguese is tasked with breaking forward and trying to dispossess onrushing forward.

Also, when facing off against dribbling wingers, he is quick enough and agile to stay level with them and not get beaten for pace, as well as more importantly dispossessing them. When he senses the threat of the attacker, he is more than capable of assessing the danger, reading what his opponent is going to do and stopping them before they can progress even further.

With the capacity to respond quickly to the on-ball move­ment of opposition players, the Portuguese U21 star is able to track op­ponents and pick his moment to make tackles. The 6-foot 1inch defender’s strength, tackling, and mobility to cover the space behind if needed means he can make the seemingly risky defensive approach extremely fruitful.

As per multiple reports earlier this month, the Red Devils were strongly linked with a summer swoop for the 20-year-old defender. The Portuguese starlet, primarily a centre-back who can also turn out at left-back, had been tracked by United chiefs for some time, with their interest real ahead of an Old Trafford rebuild under Erik ten Hag. But with the arrival of Lisandro Martinez from Ajax to reunite with his former manager, interest in the Portuguese star cooled off.

Newcastle United were also believed to be interested in a possible move for the young centre-back, who has a €45m (£38.5m) release clause and has previously been hailed as ‘underrated’.

Inacio is the prototypical modern defender in the sense that he can pass, tackle, defend, and is even a scoring threat from set-pieces. Add to that his left-footedness, and he becomes an even rarer commodity. Therefore, it is only a matter of time before Inacio is looked at as the leader-to-be by a European elite. When that time comes, one wouldn’t bet against Inacio replicating his success at Sporting at a higher level.