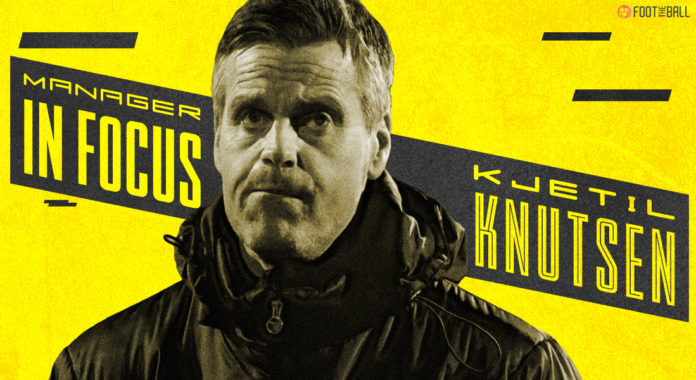 In the entire Premier League history, only two Norwegians have managed a team in the English top-flight history, Ole Gunnar Solskjaer and Egil Roger Olsen. While Solskjaer was sacked last season as Manchester United manager after a string of poor results, Olsen’s one-season tenure in the league led to Wimbledon’s relegation. Now a third Norwegian manager is making waves in world football. Kjetil Knutsen has worked wonders with FK Bodo/Glimt, leading them to consecutive league titles, and a run to the quarter-finals of the Europa League.

Knutsen’s managerial career spans more than two decades, which he has entirely spent in Norway. Knutsen’s work at his present club is nothing short of a miracle and shows his brilliance as the manager. Attacking football, modern patterns of play, giving youngsters a chance, and overachieving on a small budget, Knutsen is a dream from any club that takes a chance on him.

So, who is Kjetil Knutsen and is he ready for the big stage?

Who is Kjetil Knutsen?

Born in Arna, a borough in Bergen in Norway’s Vestland county, Knutsen started his managerial career as a junior coach at TIL Hovding, a fifth-tier club. He would spend nine years at the club, where he would become the head coach. Then, in 2004, he would finally get his first shot at the top league as he was appointed the head of first-team development at Brann.

He joined Fyllingsdalen in 2012 as head coach before moving to Asane in 2014. After two years at Asane, he would finally join FK Bodo/Glimt as an assistant coach. That season, the team won promotion to the Norwegian top league. Knutsen was promoted as manager and guided the team to an 11th-place finish. However, the top hierarchy at the club kept faith in him, and he didn’t disappoint, helping them to a second-place finish the next season.

Can’t believe tiny Bodø Glimt in Europa Conf quarters. Such a good story, such a remote club. When I visited they let me in the dressing room, which is not the norm. There’s no shortage of team spirit. pic.twitter.com/CIKuz7rHu5

And in his third attempt, he succeeded and helped FK Bodo/Glimt win their first title. His team dominated the league that season, losing only one match, scoring 103 goals and finishing 19 points ahead of their nearest rival. The league title was the first for FK Bodo/Glimt in their history.

This would get them in the UEFA Champions League qualifying round. Although they failed to qualify for it, they managed to enter UEFA Conference League, the third-tier European cup competition.

FK Bodo/Glimt finished second in their group behind Roma, whom they defeated 6-1 in perhaps the finest moment for the club and Kjetil Knutsen. They also defended their domestic title, prompting several clubs to look at the Norwegian.

In the 2021 season, the club lost several key players, and despite injuries, keep challenging the elite, recently being close to their maiden UCL place. This has all been down to Knutsen’s brilliance.

FIFA bans AIFF: How it happened? Read our report to find out!

When Kjetil Knutsen was appointed as head coach of FK Bodo/Glimt, the club finished only 11th, and this was due to the system he employed. Knutsen prefers a system that encourages high pressing and is attack-minded, much like Jurgen Klopp’s Gegenpressing. Knutsen’s style was simple: win the ball as quickly as possible, press the opponents in their half and make the field as wide as possible. And while the system may be deployed heavily in the top leagues, it is hard to find the personnel to do so in a league like Eliteserien (Norwegian First Division).

Hence it took an entire season for the team to acclimatise to Knutsen’s demands. But when it did, FK Bodo/Glimt became unstoppable. In the following season, they broke the record for most points, most wins, most home wins, most away wins, most goals and the best goal difference in the league’s history.

The successful implementation of such a deeply tactical system in the Norwegian league was nothing short of a miracle. In defence, the team resorted to a 4-1-4-1 system to ensure they didn’t get pushed back in their half.

Bodø/Glimt 2-1 Roma: Jose Mourinho must be sick of these guys 😩. pic.twitter.com/MY6kTCckzW

However, they were so dominating that they rarely got pinned in their half. In attack, Knutsen’s philosophy is to create overloads, especially on the wings. The teams make multiple passing triangles. Players always show for the ball and every player on the ball has two passing options at all times. So, they just outpassed their opponents much like Barcelona did with their famed tiki-taka system.

The team’s star was Jens Petter Hauge, who scored 35 goals and had 30 assists in 117 games. Other important players were midfielder Hakon Evjen and winger Philip Zinckernagel. However, what made Knutsen different was his strong emphasis on mental toughness. Knutsen appointed Bjorn Mannsverk, a former Norwegian air force pilot, as a mental health coach to ensure this. Knutsen’s emphasis was that his players should be psychologically in top form. Under him, FK Bodo/Glimt were among the smartest run teams in Europe.

These military-style drills under Mannsverk are why the team executed brilliant results such as Roma’s thrashing, back-to-back titles, and Conference League quarter-final run.

Various media reports had earlier stated that Burnley were looking to sign Knutsen after their relegation. However, Knutsen wanted to finish the season with Bodo. Other sides, such as Brighton and Southampton, were also linked.

Kjetil Knutsen is slowly but surely reaching the point where he would find it hard to ignore the advances of other clubs. He has worked miracles with Bodo/Glimt while playing an attractive style of football. Having a club where the town’s population is 52,000 on the brink of a Champions League place is the stuff fairytales are made of.

Because Kjetil Knutsen’s tactics are the perfect modern philosophy, it is a matter of time before a club in the top-5 leagues takes a chance on him. Graham Potter has gone to Chelsea. Brighton could look towards Knutsen as his replacement as the similarities are uncanny. Potter made his mark at Ostersund FK, an underdog in Sweden. Knutsen has done this part at Bodo/Glimt. Now a move to the Premier League? Will the similarities continue?