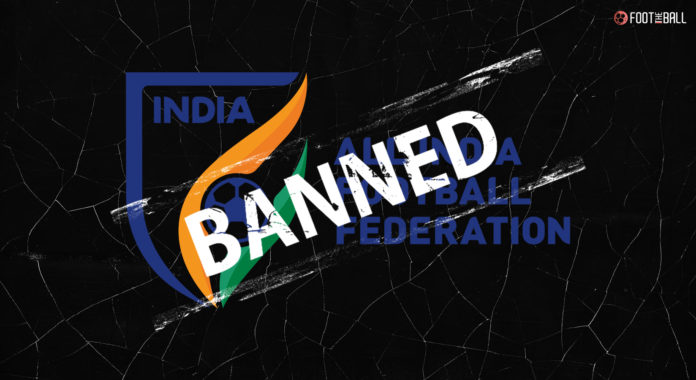 On Tuesday (August 16), India got a massive jolt to its footballing ambitions after FIFA banned the All India Football Federation (AIFF). FIFA, in a statement, said that it had taken action over interference by third parties. In a statement, the football body said, “The Bureau of the FIFA Council has unanimously decided to suspend the All India Football Federation (AIFF) with immediate effect due to undue influence from third parties, which constitutes a serious violation of the FIFA Statutes”.

FIFA has also said once the AIFF is allowed to resume the full charges of the body, the ban will be lifted. According to FIFA rules, there can be no government interference in the workings of the national football association. In these cases, FIFA has set up normalisation committees which bring back power to the footballing association.

However, FIFA has said that it is in talks with the Ministry of Youth Affairs and Sports in India aimed at a positive outcome.

But what led to the dismissal of the AIFF? How the rot in AIFF compelled the Supreme Court of India to intervene in the affairs of AIFF.

Despite having a population of over 1 billion, India has struggled on the global football stage. Like so many others, the game has always been in the shadow of cricket. Their highest FIFA ranking has been 94th. They remain without a single World Cup appearance.

Many have blamed the lacklustre attitude of AIFF for it. In 2009, Praful Patel, the then Civil Aviation minister in the Indian government, was appointed as the President of the AIFF.

The Bureau of the FIFA Council has unanimously decided to suspend the All India Football Federation (AIFF) with immediate effect due to undue influence from third parties, which constitutes a serious violation of the FIFA Statutes: FIFA

Praful Patel also led to the establishment a women’s football league in 2016. However, behind the scenes, things were not rosy. Due to the dilapidated league structure, the country had seen several famous clubs such as Mahindra United, JCT Mills, and Mohammedan Sporting go bankrupt.

Furthermore, after ISL became the top league, I-League was made the second-tier league. Under the new rules, the I-League champions Aizawl FC should have got promoted to the ISL, the new top league. But since Aizawl was not among the ten cities that were shortlisted for ISL teams, they could not participate in the ISL. Thus the best team in India was forced to play in the second-tier league.

However, the main reason that plagued the governing body caused the FIFA dismissal started in 2017.

Watched Conte’s and Tuchel’s fight? Here are top 10 football fights of all time

However, all those occupying senior positions in the AIFF are doing it outside their tenure. The tenure of Praful Patel should have ended on October 23, 2020. Moreover, Praful Patel had also completed three terms and 12 years as AIFF President, the maximum limit the National Sports Code allowed.

Furthermore, it was also said that since the tenure had already ended, any decision taken by the top echelons of AIFF could be challenged in court, leading the footballing body into further legal troubles.

The All India Football Federation (AIFF) has been suspended by FIFA due to third party interference.

⛔ India will not participate in AFC Asian Cup 2023, Philippines is an alternative.

Several allegations that the body is rampant with corruption have also emerged in the media. According to several media reports, AIFF insiders say specific vendors were preferred for supplies, organising foreign trips. They also allege that all this was being done to keep Praful Patel as the AIFF President.

All these rank as violations of the National Sports Code, which prompted the Ministry of Youth Affairs and Sports to drastically reduce the AIFF funding. While the body had asked for 50 crores annual budget, the ministry only granted them five crores asking the AIFF to focus on grassroots levels.

Modern football led to death of many positions and the Libero is one of them.

The case between AIFF and the sports ministry reached the Supreme Court. The apex court decided that the AIFF’s top officials were not legally allowed to hold office and thus appointed a Committee of Administrators (CoA). This violates FIFA’s stature, which bars any third-party interference. Kenya faced something similar after third-party interference prompted FIFA to ban the football governing body there.

However, the CoA still got to work as the top court expressed concerns over the daily workings of AIFF under Praful Patel. Moreover, several state football associations were also wary of how Patel ran the AIFF.

As per media reports, the AIFF held training camps in Kerala and Jammu & Kashmir without involving the state football bodies. These caused resentment against Patel internally as well.

Several state bodies requested FIFA and AFC to intervene by establishing a normalisation committee. However, before FIFA or AFC could intervene, the sports ministry filed an affidavit in the Supreme Court, which led to the formation of the CoA.

With Qatar World Cup just months away, check out all the FIFA World Cup Winners

The CoA workings and FIFA-AFC talks

On June 21, 2022, a joint FIFA-AFC team arrived to take stock of the process. After talks with CoA, a 12-member advisory committee was formed to oversee the daily affairs of AIFF. However, FIFA was still concerned over third-party interference.

The All India Football Federation (AIFF) has been suspended by FIFA due to third party interference.

⛔ India will not participate in AFC Asian Cup 2023, Philippines is an alternative.

During this time, the Supreme Court ordered the elections to be held as soon as possible to avoid a FIFA ban. However, the nominations of Subrata Dutta and Larsing Ming for the elections were rejected as both have served three terms which makes them ineligible under the Sports Code.

This delay was too much for FIFA, which banned the country on August 16.

How will the ban affect Indian football?

The main effect of the ban is on the Under-17s Women’s World Cup, which is scheduled to be held in October. It was a momentous occasion for India to showcase its capabilities as an efficient host. However, as of now, India has been stripped of its hosting rights.

There are other repercussions as well. After the FIFA ban, the national team cannot participate in tournaments under FIFA and AFC. The same extends to Indian clubs as well. Furthermore, Indian clubs cannot also register foreign players until the ban is lifted.

This will hurt the image of the ISL. In addition, the AFC campaigns of ATK Mohun Bagan’s men’s team are also in jeopardy. So is Gokulam Kerala’s campaign in the AFC Women’s Cup. Gokulam Kerala’s team is already in Uzbekistan for their matches against Uzbeki side Sogdiana – W and Iranian side Bam Khatoon.

"At the same time, good opportunity for us (all the stakeholders) to get the system corrected."

Other countries banned by FIFA

This is not the first time FIFA banned a country due to third-party interference. Since Praful Patel’s appointment in 2009, FIFA has banned nine countries on the same issue.

The ban on Kenya and Zimbabwe is still in force. However, the ban usually gets lifted as soon as the national body takes charge of its affairs. How long it will take India to do so remains to be seen.

After FIFA’s ban, former Indian captain Sunil Chhetri said, It’s very unfortunate that FIFA has banned Indian football, and at the same time, I feel it’s a very harsh decision. But at the same time, I think it’s a great opportunity to get our system right. It’s very important the all the stakeholders be it federations, state associations, sports ministry, to come together and get the system right”.