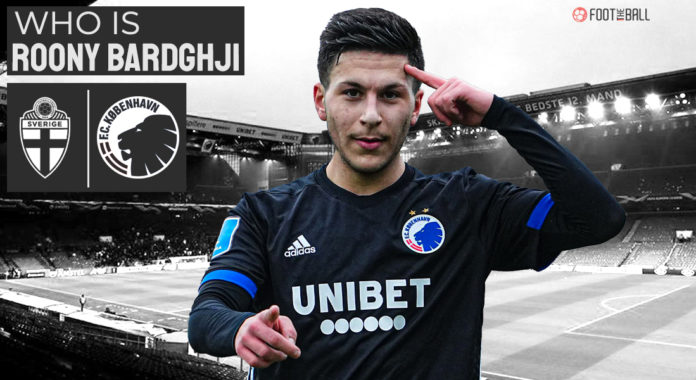 “If you’re good enough, you’re old enough” – The famous line once said by none other than the legendary Sir Alex Ferguson at a post-match conference. Many young footballers have tried to bring justice to this quote, but very few have been able to do so.

Roony Bardghji is one of the latest gems in football trying to emulate some of the previous youngsters that couldn’t live up to the hype. Although only time will tell if he etches his name in the folklore of the football world.

So, what makes Roony – who, perhaps predictably, has been dubbed ‘the Swedish Messi‘ by some media outlets due to his penchant to play off the right before coming inside onto his stronger left too – so special? Given the way he has begun life as a first-team player, the signs are good that Roony will be a difference-maker for Copenhagen, even if his talent means that he will be forced to move on in the not-too-distant future.

Roony Bardghji – who generally goes solely by his first name – was less than two weeks clear of his 16th birthday when he cut inside from the right before unleashing a 25-yard shot into the bottom corner to open his FC Copenhagen account in late November, becoming the youngest goalscorer in Danish top-flight history in the process.

16-year-old Bardghji, was born in Kuwait to a Syrian family, before moving to Sweden when he was seven. So highly rated was he, that just six days after his 16th birthday Bardghji made his senior debut.

Just a week after that, he scored his first career goal, becoming the youngest goalscorer in Danish Superliga history, earning him comparisons with England icon Wayne Rooney and seven-time Ballon d’Or winner Lionel Messi. In addition, in his six games for the Swedish U17s, the winger has scored five times, so Bardghji’s meteoric rise is plain to see.

The stories of how fame and glitter in FIFA did not mean onfield success and longevity at the top for these stars.#Fifa #Legends https://t.co/cz3zPU1XPw

We’ve seen one brilliant Rooney in world football, and now it appears another is emerging. Roony Bardghji has been dubbed ‘The Swedish Messi’ by some due to his left-footed nature and technically strong diminutive style standing at 5 foot 6.

Right now, it appears the sky’s the limit for the Sweden under-17 international. For such a young player he has such a clear understanding of the game matched with strong balance and technical quality. In similar fashion to Messi, he is a nightmare and is already very difficult to try and get the ball off him.

Since his debut he has gone on to make fourteen first-team appearances scoring two goals. Bayern Munich, Borussia Dortmund, Chelsea and Ajax are all heavily linked with making a move for Bardghji this summer, but manager Jess Thorup is keen for the youngster to become part of the core of a young side that includes fellow Scandinavian young talent such as William Boeving and Isak Johannessen.

Right now, he’s going to play a hell of a lot of games for Copenhagen and make a difference, and that’s hopefully what we’ll see.

It would be sound advice for Roony to follow his manager’s wisdom. Becoming the heart of Copenhagen’s team and trying to win titles would be a far more rewarding experience than spending time either out on loan or in the reserves of one of Europe’s big boys. His quality is undoubted, and he’ll only become more of a force for both club and country with his current platform. The comparisons to Messi are unfair but the sentiment of it is that this is a player seen as generational by Sweden and if he can become half as good as one of football’s greatest ever stars, world football will be putting his name alongside the likes of Zlatan as one of Sweden’s greats in years to come, and Roony’s stats speak for themself.

A forward who primarily plays as a right-winger, he came through the Malmo academy before joining Copenhagen in 2020, where he made his senior debut just last month. At international level, he has made six appearances for the Swedish U17s.

Able to operate as a second striker as well as attacking midfield, Roony was already featuring for Mamo’s under 19s at 14 and after a year made the move across Scandinavia to Danish giants Copenhagen, where in his first ten matches for the under 17s he hit fifteen goals, leading the club to tying him down to a three and a half year deal announced on his 15th birthday on the club’s official website.

Chelsea have reportedly been tracking him since his Malmo days and now that the cat is out of the bag, it will be imperative for the Blues to sign him sooner rather than later, with Bayern Munich, Ajax and Barcelona also in the race for Bardghji’s signature, with more clubs set to follow. After Bardghji’s breakthrough, Copenhagen boss Jess Thorup told Tipsbladet: “It is not the intention that they (Copenhagen’s young stars) should just be here for a few matches and then move on.

“They should preferably stay here for a few years and help FCK achieve good results.

“But when the time is right and the really big clubs are there, then that can be the springboard. “But right now, he’s just going to play a hell of a lot of games for FCK and make a difference, and that’s hopefully what we’ll see.”

Roony Bardghji also spoke about his future to Fotbollskanalen : “It’s big, of course. But that’s not something I’m thinking about. It’s my dad and the club who take care of all that. For me, it has been important not to think too much about it. It’s just talk, and it’s not always 100 per cent true either. So it’s nothing I know about, it’s my dad who knows and he says nothing to me. He tries to keep it calm and I try not to read.

“The plan is to stay. We have not talked about anything else. There is always talk at home about what is best for my future, we have not made a decision. You never know what might happen. At the same time I am calm, I just want to play and FCK is a good club for me that has given me the chance. I’m happy to be here, but you never know.”