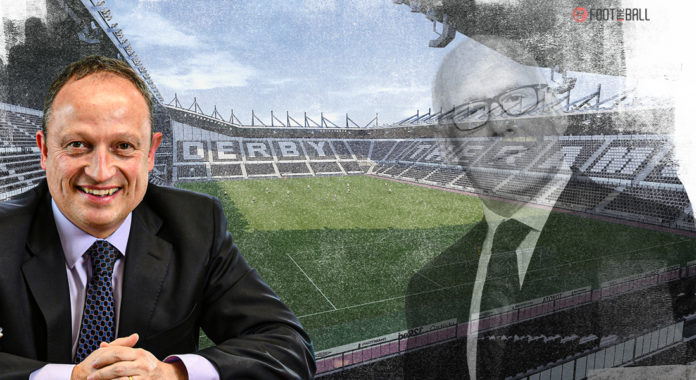 Nine months, three failed takeover bids, going into administration, a 21-point deduction and a relegation to League 1, Wayne Rooney left. After lurching from one disaster to another, Derby County finally saw some light at the end of the tunnel. It was confirmed that David Clowes, a lifelong fan of the club sealed a deal to become the owner of Derby County. With that, the club is now out of administration. Future planning can start now with the club facing its first season back in the 3rd division. But, who is David Clowes?

Who is David Clowes?

However, David Clowes’ skillset is not limited to turning over properties. David Clowes is also a qualified pilot. He has the rank of a Captain. He has flown Boeing 737s and worked the British Midlands airlines till 2012. His is the story of a local boy who did good and now came back to purchase the club he has supported all his life.

“It is with an immense sense of pride that I write to you having finalised our agreement to buy Derby County and end nine months of uncertainty and fear over the future of our club.

As a lifelong supporter, I could not stand by as the risk of losing Derby County became all too real. I could not have looked myself in the mirror if I had not done everything possible to protect it. That is why it is so exciting to be part of the process of building a fresh future at Pride Park for the fans and loyal club staff who have been through so much,” said David Clowes, in his first communication with fans through an open letter.

Interestingly, his commitment to buying the club can be seen in one simple gesture. After previous preferred bidder Chris Kirchner was granted exclusivity to buy the club, Kirchner spent months dragging the process before eventually withdrawing. However, Clowes sealed the deal within a week of being granted exclusivity. No hassle or leaks were put out in the media.

The speed with which Clowes sealed the deal keeps no doubts about his ability to finance the club. He has featured in The Sunday Times rich list in 2018. At the time, David Clowes’ net worth was estimated to be around £252m.

He also owns Super King Air 200, a twin-turboprop aircraft worth at least $1m (£815k). Moreover, his biggest financial flex came when he resolved a longstanding ownership issue at the club. Previous owner Mel Morris still owned the club’s stadium, Pride Park. Morris had sold the stadium to himself (His company) to dodge the losses the club was making. This made Pride Park a contentious issue in takeover negotiations. The investment needed to buy the club became inflated. However, David Clowes swooped in and in less than a week, the sale for Pride Park was also completed.

“The decision to get involved with the purchase of the stadium, and subsequently the club, has not been an easy one. As a private person, I did not want the publicity and would prefer to remain an anonymous supporter watching the team from my usual seat. However, if that is the price to secure the future of the club, then so be it,” said Clowes, in an open letter to Derby fans post the takeover.

What next for Derby County?

David Clowes said in his open letter that full support will be given to the existing staff and recruitment for the new season will be underway soon. He reiterated his commitment to the Category One academy of Derby County. The sale of talented youngsters had helped the club survive in difficult times.

“Alongside my team, I will be doing everything in my power to make Derby County safe, secure, and successful for many generations to come,” said Clowes.

After a tortuous nine months, where they almost lost their club, Derby County fans have hope again, in the form of David Clowes.