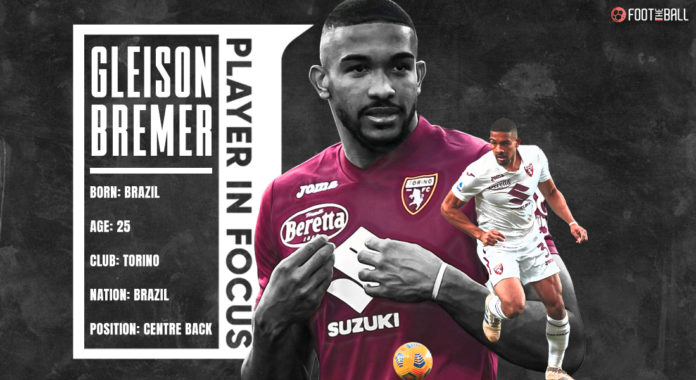 There are perhaps few better combinations than Serie A and defenders. The Italian league has always been the gold standard in the art of defending. Franco Baresi, Paolo Maldini, Leonardo Bonucci, and Fabio Cannavaro are some of the names to come out of the league who are counted among the best defenders ever. The emergence of Torino’s Gleison Bremer is the latest proof of Serie A’s defensive production.

Gleison Bremer Silva Nascimento, also known as Gleison Bremer was voted Serie A ‘Defender of the Year’. The Brazilian has grown leaps and bounds since joining Torino from Atletico Mineiro.

Ivan Juric, appointed manager before the start of the 2021 season, has managed to get the best out of him. The Croatian has played Bremer at the centre of his three-person backline. In the 2021-22 season. And while the team performed well below expectations, Bremer shined. He was the reason that the club was not relegated from Serie A.

Paperworks signed and completed between Juventus and Torino for Gleison Bremer. Brazilian centre back has signed the contract until June 2027, Torino will receive €41m fee plus add-ons. ⚪️⚫️🇧🇷 #Juventus

Medical tests in the morning, official statement to follow. pic.twitter.com/ke3mSzVQnt

However, due to those exceptional performances, clubs were hovering around the 25-year-old. A defender of Bremer’s calibre is rarely available, and many clubs were in the race to sign him. Most notably, Juventus and Inter Milan. Juventus though went ahead and sealed the deal to bring him to Turin for €41m fee plus add-ons. The official announcement is due soon, and Juventus are getting the perfect replacement for Matthijs De Ligt who moved to Bayern Munich for €80m.

So, who is Torino’s Brazilian superstar?

Gleison Bremer is a true Serie A defender. He can tackle, intercept, and clear the ball without any fuss. Playing at the centre of a three-person backline, the defender is responsible for negating the opposition’s attack. And it is here that the Brazilian shines.

Due to the presence of two other centre-backs alongside him, Bremer has the freedom to move between the defensive and midfield third. It is the reason that his pressure numbers are so good. However, just having good pressure numbers doesn’t make a player the defender of the season,

What makes Bremer stand out is when the team is vulnerable. The Brazilian’s greatest asset is his timing. Whether tackle, interception, blocks, or passing, he makes his move at the perfect time.

CB: Gleison Bremer
After another colossal campaign at the heart of the Torino defence, there is now surely no way they can hold on to one of Europe’s most sought-after defenders. The Brazilian led the league’s stats columns for interceptions, recoveries and most aerial duels won. pic.twitter.com/v6pvf6JIq5

In a counterattacking situation, he will look to occupy the passing lane only when it is likely that the opposite player has no option but to pass in that lane. If he moves early, he will have to leave and create a space for the opposition.

However, when he does make his move, he usually comes out on top. According to Opta, Bremer was the player with the most interceptions, recoveries and aerial duels this season.

So, what do the stats say?

Real vs reel: Stars who were world-class in FIFA but failed to fulfil potential in real life

Well, to sum it up, Bremer is a stats darling. The Brazilian has dominated almost every defensive metric out there. With 105 interceptions to his name, Bremer was not only the top player in Serie A but also in Europe’s top five leagues, ahead of Aurélien Tchouaméni. He was also the fourth-best player in the league in terms of clearances.

As mentioned above, Bremer is an elite presser of the ball. According to fbref, Bremer makes 16.85 pressures per 90 minutes, among the top per cent of all defenders. And he is equally good at pressing in both the defensive and attacking third. His recovery numbers are also impressive at 14.25 per 90 minutes, among the top one per cent defenders. These are numbers comparable to Virgil Van Dijk and Ruben Dias.

His excellent run continues in interceptions and aerial won with 3.64 (top two per cent) and 4.80 (top one per cent). Data analytics site Soccerment also rated him as the best defender.

Surprisingly, Bremer is also dangerous at his end and near the opposition’s goal. His 1.68 touches per 90 minutes in the penalty box is one of the best when it comes to defenders.

Any club signing Bremer would be guaranteed one thing, defensive solidity. He is a beast when snuffing out the opposition’s attack. While he does have his weaknesses, his rise at Torino has shown that he is a quick learner. With a duel-winning rate of over 70 per cent, Bremer gives his team an edge when they are under counterattack.

He also has a dribble success rate of 73 per cent, which is too good for a centre-back. This shows that he is not just a no-nonsense defender but can also be integral to a team’s build-up. This will put him on the radar of the biggest club in Europe who want defenders to be good on the ball and progressive passing.

And if he can be such a good player in a relegation-threatened side, imagine him surrounded by world-class talent. While it can be questioned whether he will be this good in a two-person centre-back formation, Bremer would indeed dominate under a good manager.

With so many clubs looking for an elite defender, Gleison Bremer is in huge demand. Inter Milan were leading the race to sign the talented Brazilian only for Juventus to swoop in with a higher bid and win the race for his signature.

Both clubs wanted to add defensive stability to their team, which Bremer will bring. In the end Bremer gets his wish to play for a bigger club and most importantly a club that plays Champions League football.