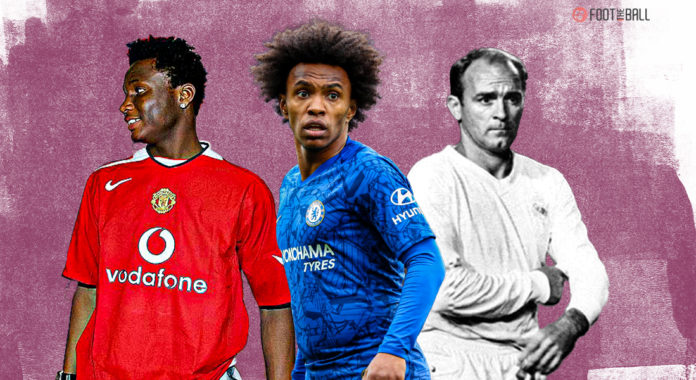 It is never an easy transaction between Manchester United and a new signing. The same was the case with Tyrell Malacia, the talented Dutch left-back. The Red Devils were not considering the former Feyenoord as a serious target early on.

However, their interest was ignited suddenly with the player on the verge of moving to Lyon. United made an increased offer of €15m plus €2m add-ons, as compared to Lyon’s €13m plus €2m add-ons.

The urgency came in the eleventh hour, with Lyon blindsided. Jean-Michel Aulas is not known for tolerating these kind of moves, and Feyenoord saw the chance to make more money. Therefore, Malacia is going to be a Red Devil, and Lyon will justifiably be angry. However, this phenomenon is not uncommon in football.

In fact, it also has its own term, for when a rival club signs a player, on the verge of joining a different team. There are several famous examples from the past, and FootTheBall recounts 10 of them.

Yes, that is the official name for it. Manchester United have essentially pulled off a “gazumping.” But what does it actually mean? Well, it originated in the UK itself, from the housing sector. Cambridge Dictionary describes its meaning as,

Merriam-Webster has gone a similar way, by stating,

Therefore, the sporting context from these definitions is clear. It is when a team A has almost completed a deal for a player, before team B swoops in and signs him. It is usually done with a higher offer or bonus incentives which convince the selling club or player to join team B.

Needless to say, things never end up being rosy for team A. However, that is how the transfer world works, and football is no different. The more familiar term for this kind of stunt is ‘hijack.’

Back when the Brazilian winger was one of the in-demand players in football. Bordeaux were preparing to sell Malcom in 2018, with Roma having reached a deal. Fans of the Giallorossi were at the airport waiting to welcome him when the news broke.

Barcelona had entered negotiations in the final moments, and made a larger offer. Bordeaux were lured to the riches of the Blaugrana and sealed a deal. Roma sporting director Monchi considered legal action, while the player’s revenge called it “revenge,” over a previous transfer of a client.

The English great, “Gazza” would be a national icon and have a brilliant on-field career. All of it could have been with Manchester United, whom he almost signed for in 1988.

Sir Alex Ferguson had personally received assurances from Gascoigne that he would sign, before the manager left for his holidays. However, a nasty surprise awaited Ferguson as he learnt on vacation that Spurs have snapped up his target.

Paul Gascoigne had his trademark celebration, but what was it all about?

Spurs chairman Irving Scholar had pulled off a masterstroke, not without some clever thinking. He had bought a house for Gascoigne’s parents and a sunbed for his sister, alongside the promise of more game time.

A true story of “football kidnapping,” and shady Russian contacts. Anzhi were in need of selling their superstars, and Willian was attracting heavy interest. He had already completed his medical with Spurs, before Roman Abramovich got busy.

The former Chelsea owner connected with former Anzhi owner Suleyman Kerimov to get the Brazilian. The news came just when Willian was going to Spurs’ training centre in order to sign his new contract.

However, that never materialized with the player insisting on going to Chelsea. Willian spent around eight hours in the training centre, while Daniel Levy tried to change his mind. Needless to say, it failed, and Willian was let go before promptly signing with the Blues.

Not a traditional hijack, but the Blaugrana will feel pretty gazumped at this. Wijnaldum was a free agent in summer 2021, and Barcelona were primed to land him. Joan Laporta was a on a signing spree, and Wijnaldum was thought to have been a done deal.

However, PSG intervened and brought their incredible financial might with them. Wijnaldum’s head was turned, and he left for Paris, leaving Barcelona feeling extremely peeved. However, Wijnaldum had a terrible debut season in France, while Barcelona had a rejuvenation under Xavi.

Arsene Wenger always seemed to get one over their bitter rivals. Petit was on the verge of signing for Spurs, and had already spoken to then chairman Alan Sugar. However, Wenger got wind of Petit in London and urged his former protegee to not sign with Spurs.

Petit agreed, and asked for more time from Spurs. He went headed straight for Wenger’s house, and sorted the details of signing with Arsenal. The craziest thing about all of this is Petit used a taxi paid for by Spurs to meet with Wenger!

A move that changed with a managerial appointment. Napoli were looking for buyers in 2018, and Manchester City were in pole position. Pep Guardiola loves a defensive midfielder, and the two sides had the deal almost complete.

Only the final signings were left. However, the move fell through due to Chelsea signing former Napoli boss Maurizio Sarri. Jorginho had experienced his career breakthrough with Sarri, and joined forces with him once again. Needless to say, it has been a great decision for the player and the club.

One of the most disastrous signings in Manchester United history. Alexis Sanchez was on the verge of joining Manchester City in summer 2017, but the deal could not be done. However, City were still hoping to sign him and went back in January 2018.

Transfer policy is embarrassing – signing Alexis Sanchez almost exclusively on the basis that Manchester City wanted him. Didn't fit into any playing style, tore up wage structure, unsettling other players and now players (Herrera/Mata) likely to walk away for free.

“The reality is that the economics simply didn’t work for us any more. If it makes sense for us, we’ll do it. If it doesn’t make sense, we are perfectly comfortable walking away.”

Dodgier than the fax machine? Kenny Dalglish would certainly like to believe. Keane was leaving Forest after their relegation in 1993, and personal terms were agreed with Blackburn Rovers. However, Dalglish could not get the necessary paperwork through in time due to the offices at Ewood Park being closed over the weekend.

Sir Alex Ferguson was on hand to convince Keane to ditch Rovers. Surely, Ferguson was motivated by not letting a former Liverpool hero getting Keane. In the end, Keane joined the Red Devils and went on to have a distinguished career.

One of the most confusing transfer sagas in Premier League history. Mikel had turned 18, and Manchester United announced in April 2005 that he will join in January 2006. Moreover, Mikel had also signed a contract, with no agents.

However, Chelsea then came to the party, stating they had found an agreement with Mikel’s agents and Lyn. The latter denied, and wanted to honor the agreement with United. The Red Devils organized a press conference, with Mikel holding up a United shirt.

Jon Mikel Obi says he made the best decision of his life when he choose Chelsea instead of Man Utd in 2006. 💙🇳🇬 pic.twitter.com/5sYxEtn81e

The story got even bizarre when Mikel went missing in May 2005, and the transfer deal reached the Court of Arbitration for Sport (CAS). In the end, Chelsea agreed to pay £12m to United and £4m to Lyn, while the Red Devils transferred Mikel’s registration rights to the Blues.

The transfer that preceded the era of gazumps. Di Stefano was a South American superstar by the early 1950s. Millonarios played against Real Madrid in 1952, before Barcelona went to Argentina to get Di Stefano’s rights.

This meant that Di Stefano would have to join the Blaugrana, but there was a problem. Though FIFA recognized the deal, the Spanish Football Federatio did not give their consent. This sparked Real Madrid into action, who went on to reach an agreement with Millonarios for Di Stefano. It sparked an intense battle between the two sides, with the outcome being a unique one.

Real Madrid are not buying Galactiocs anymore, they are making them. Here’s how

Di Stefano would have to play for each club in alternate seasons, starting from 1953. However, this was wholly unacceptable for Barcelona, whose president had to resign. The interim board decided to get rid of Di Stefano, selling their rights to Madrid.

Of course, Di Stefano went on to become one of the greatest ever players, winning five straight European Cups, among many other trophies.

A SOMBER SUMMER AT ANFIELD