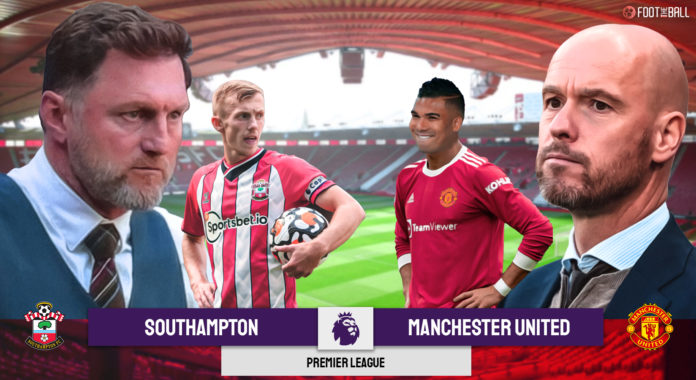 The unexpected happened and now comes the responsibility to keep it going. Down and out, not given any chance of victory in the North-West derby against Liverpool, Manchester United put in a performance for the ages en route to a 2-1 win at Old Trafford. However, football waits for nobody. The mood completely changed from gloom to glee after one win. It will revert just as quickly if this momentum is not kept. And that’s what Southampton will be hoping happens. The two teams meet on Saturday, at 12.30 PM BST at St. Mary’s Stadium.

Like Manchester United, Southampton have had a topsy-turvy start to the season. Panic prevailed at the club after Spurs swatted them aside 4-1 in their opener. Since then, they have beaten Leicester away while drawing against Jesse Marsch’s resurgent Leeds at home. In this unpredictable PL season, that stuttery form is good for 11th place. However, both Erik ten Hag and Ralph Hasenhuttl would know that their fans would demand better. United would look to capitalise on their newly gained confidence while Southampton would want to keep their unbeaten streak going. Matches between the two clubs have become exciting affairs recently. United famously prevailed in a record-equalling 9-0 win under Solskjaer. TO hit back, a home draw against Southampton last season effectively closed the top-4 door for the Red Devils last season.

With all that said, let’s take a look at Southampton vs Manchester United preview.

Southampton come into the game with only one long-term absentee, albeit a crucial one. Tino Livramento is not slated to return before the end of the year after rupturing his in April. However, Kyle Walker-Peters has filled in ably at the RB spot.

In midfield, new signing Romeo Lavia has taken to PL like duck to water. Spraying passes from deep, being in the right place for interceptions, and making his team tick, Lavia has instantly become one of the Premier League’s best young players. He is expected to sit in a pivot with captain James Ward-Prowse with another new signing, Sekou Mara, leading the line. In goal, Gavin Bazunu came from Manchester City and immediately staked a claim to be first-choice over McCarthy. Che Adams could start with Mara after consecutive braces for the Saints, against Leicester and Cambridge.

At Manchester United, things look much simpler after recent developments. The CB pairing of Varane with Martinez looks set to continue. Lisandro Martinez’s playing style is becoming more suited to PL every game. Complimenting him on the left is Tyrell Malacia, who has become a fan-favourite in record time. Martial has returned from injury to lead the line. However, the most exciting thing from the fans’ perspective this game will be the debut of Casemiro. Signed from Real Madrid, Casemiro is a huge coup, he fills the gaping hole in the defensive midfield position. If Erik ten Hag trusts Casemiro enough, he could start as lone DM alongside free 8s in Eriksen and Fernandes. A more continuous option would be pairing Casemiro with Fred in the pivot, like Brazil national team.

Southampton will looks towards their captain, James Ward-Prowse to decide this game. Ward-Prowse has troubled United in the past with his world-class set-piece quality. Manchester United still look susceptible to set pieces. Therefore, every corner and attacking free-kick will give United fans a scare if “JWP” is at it. The midfield battle of Casemiro vs Lavia should also be exciting as experience meets youth.

Manchester United, on the other hand, should look no further than Anthony Martial. The French forward returned to play 45 minutes last game after injury and the team looks transformed with him as the focal point. He looks like a man rejuvenated. With elite hold-up play, silky dribbling skills, and progressive passing, Martial will be a handful for Southampton.

Also watch out for a confident Rashford aiming to give Kyle Walker-Peters problems after giving Alexander-Arnold a tough time last game.

The prediction of this game would have been a lot different had United not shown fight against Liverpool. Still, Southampton’s pressing game is the perfect antidote to United’s buildup efforts. This could be a nervy affair with the gap in player quality ultimately making the difference. FootTheBall predicts a 2-1 win for Manchester United.