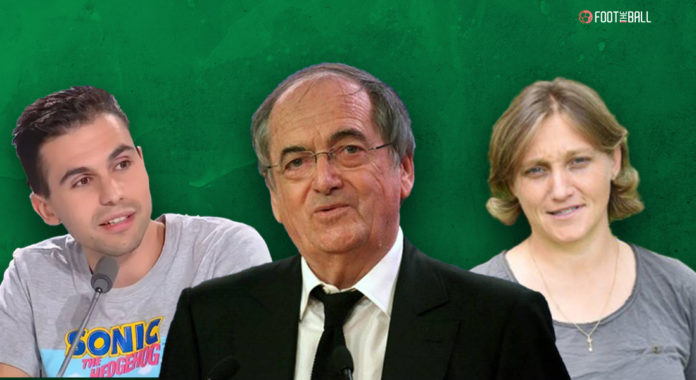 Well, the game of football is by far the most famous sport across the globe. The feeling of watching your best team win a match, your best player scoring a goal, conjuring a beautiful pass, making an inch-perfect tackler or making a logic-defying save is unparalleled. However, like everything else in our lives, there is a dark side to the game, or should we say too dark. French investigative journalist Romain Molina is one of the best when it comes to exposing the dark underbelly of football. And his latest expose has sent shockwaves across France and the wider football world.

The football world has, in recent months, experienced several issues that have stained its mage. These include the Mason Greenwood alleged assault case and the domestic violence case against Ryan Giggs. Footballers have repeatedly proved that they are not good role models.

Molina’s recent article reveals chilling details of underage players being sexually abused. According to Molina, these incidents were deliberately suppressed by the French Football Federation (FFF). Molina also said that complaints like these had been reported since 1980 but to no avail.

Molina’s report highlights two names in particular. The first is Angelique Roujas, a former French national player who was the head of the women’s section at Clairefontaine, the national training centre. The second is David San Jose, a non-football educator at Clairefontaine.

Roujas had been at the centre of several complaints over the years. She was removed from the post by FFF in 2013 due to sexual harassment complaints. Meanwhile, San Jose was dismissed in 2020 after misbehaving with a 13-year-old.

Here’s all you need to know about Romain Molina’s expose.

Molina published his findings on his website Josimar. He started the report by targeting FFF President Noel Le Graet. The 81-year-old chief of French football has sued the magazine So Foot. The magazine had reported on allegations of sexual misconduct against him.

The French media have heavily criticised the FFF’s attempt to suppress complaints of sexual misconduct. However, a former FFF board member told Josimar on the condition of anonymity that the culture at the football association encourages these matters to be swept under the carpet.

Most of these incidents of alleged sexual harassment occurred at Clairefontaine.

Molina’s report focused on Roujas and San Jose. But who are these individuals, and what are the allegations against them?

Angelique Roujas is a former French international footballer. Roujas played as a forward and represented France 51 times, scoring 14 goals. She retired from football at Euro 2001. In 2004, Roujas was appointed the head of the national women’s football training centre CNFE Clairefontaine. She served in the post from 2003 till her expulsion in 2013.

Molina’s report stated that as the head of CNFE Clairefontaine, she used her position to have sexual relations with young girls. The FFF accepted these allegations in an internal document on October 30, 2013.

The document read, “One boarder mentioned that Madame Angélique Roujas took advantage of her state of weakness and her hierarchical link to obtain such relations (intimate ones). The facts went back from 2004 and 2005, a period in which the concerned boarders were in Clairefontaine”.

The document added that since most victims wanted to remain anonymous, it was difficult to press criminal charges. Roujas’s victim includes players who played for the French national team in the future.

Molina reported that FFF took immediate action in this matter because the women’s national team threatened to strike.

However, even after her suspension, Roujas found employment within a year at FC Metz. Her role was similar to what it was at Clairefontaine. The FFF also didn’t inform government officials as per French law. None of the top government officials such as the state secretary for sports Thierry Braillard, sports minister Valérie Fourneyron were informed about the matter,

Molina said during the entire time, the main aim of FFF was to suppress the issue rather than solve it. She is currently the head of La-Roche-sur-Yon’s youth section.

David San Jose was responsible for all the non-footballing activities at Clairefontaine. Like Roujas, San Jose was also at the centre of a controversy in 2013 when has sent a provocative text to an underage child. However, he remained in his job for another seven years.

Molina said that no action was taken against San Jose. The FFF had the power of using article 85 of its statutes to strip him of his licence. However, not only did the FFF decide against it, but it also didn’t inform any other organisation about the decision.

Speaking to Josimar, Olympique de Valence general manager Malik Vivant said that he didn’t know about the incident, Vivant wanted to hire San Jose at his club. “How am I supposed to know he was fired for his behaviour at Clairefontaine? The FFF didn’t tell anyone. So how can the clubs know” he told Josimar.

Romain Molina sacrificed his life to expose the darkest side of football. What a legend.

Molina’s report was not only limited to Roujas and San Jose but also raised other issues. This included Elisabeth Loisel, an ex-football player who coached the national women’s team for a decade. During that time, several allegations were levelled by players against Loisel. For example, they alleged that she would force players to have sex with her to be selected for the national team.

An ex-president of a women’s club confirmed the allegations to Josimar on anonymity. She said, “I told my players that they can go to Clairefontaine, but if they wanted to go, there’ll be some risks”.

And despite Le Graet expressing his concern over her ability to coach a football team, she remained in her job.

Molina also talked about the case involving financial director Marc Varin. He was accused of sexual harassment by an FFF employee. However, instead of dismissing him, the football association sided with him.

The employment tribunal ruled against Varin, and the employee won the case.

Molina also talked about Gaelle Dumas, a former France youth coach who was suspended after complaints of harassment against her. The alleged incidents took place at the FFF-owned Blagnac centre of excellence. All the victims were reported to be underage girls.

Josimar also reported on cases such as that of Ligue de la Reunion président Yves Etheve, who has been accused of sexual harassment. He is currently facing a criminal trial.

Then there is Francis-Pierre Coche, coach of France’s women’s team in the 1980s. According to Molina, he was suspended on alleged sexual blackmail and harassment complaints. However, the FFF has never acknowledged the incident publicly.

This is not the first Romain Molina expose on the issues plaguing football. Earlier, he had reported about the inefficiencies inside FFF. Molina had said that a footballer who currently plays in one of Europe’s top clubs had assaulted a woman in 2018. The player threw the woman to the ground before flashing his genitals onto her face. However, the matter was covered up by his then club and FFF.

Molina also alleged that an ex-French footballer used to smuggle illegal commodities by hiding them in their private parts.

Molina had also alleged that almost all African FA Presidents had used prostitution services. He added that the daughters of these high officials were studying in other countries at the FA’s expense.