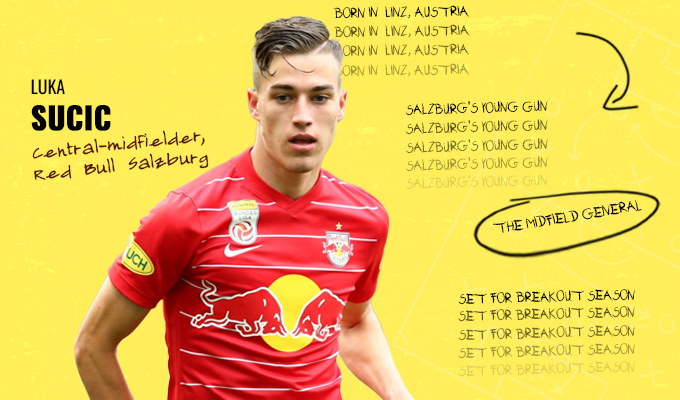 What is common between Sadio Mane and Erling Haaland? Well, for instance, they both changed clubs this season. Mane signed for Bayern Munich while Haaland went to Manchester City. But they also share something more. Both played and thrived at Red Bull Salzburg. The Austrian club has become one of the best clubs in youth development. Apart from these two, Dominik Szoboszlai, Joshua Kimmich, Dayot Upamecano, Karim Adeyemi, and Patson Daka also are products of the clubs. And after selling them, their excellent scouting network helps them find new stars. The rise of Luka Sucic is a perfect example of it.

The 20-year-old is a rising baller who plays as a central midfielder for Salzburg. Sucic has spent six years at the club, where he made rapid progress within the youth levels. Like his teammate, the impressive Roko Simic, Sucic was also sent out to Salzburg’s reserve team, Liefering, before being promoted to the senior squad.

Sucic was also on the radars of several top clubs. However, the club has already sold several key players such as Tyler Adams, Hee-chan Hwang, Brian Brobbey, Nordi Mukiele, and Ademola Lookman. Thus, they were not ready to part with Luka Sucic yet. The youngster has also been compared with his countrymate Luka Modric who is ageing like fine wine.

So, who is Luka Sucic?

Luka Sucic was born in Linz, Austria, to Croatian parents. They had migrated to Austria to escape the violence of the Bosnian War. And Sucic has shown a love for the game since his childhood. He first joined the local club SV Alkoven where he spent three years.before joining Union Edelweiss Linz. It was here that he would catch the eyes of Salzburg’s scouts.

The club signed him for a fee of €762 thousand in 2016. After two years at the club, he was promoted to the under-18s. And in his very first season, he made 17 appearances scoring five goals. This was an impressive return for a player in his first season.

Sučić has the potential to be one of the next great Croatian midfielders. He possesses great vision in the attacking third and that fits the mold of a Salzburg player. pic.twitter.com/MiZLX7VPFy

He was the fifth highest scoring central midfielder that season. His team would win the OFB Jugendliga U18 that season. The coaches at the club were so convinced of his talent that they sent him to their reserve side, FC Liefering GmbH. He scored four goals and provided five assists in his first season.

At the same time, he was also holding his own with Europe’s best young players in the UEFA Youth League. Sucic scored six goals and two assists. During the group stage, he went on four-match goals scoring streak. He would then score two goals and provide two assists in the knockout phase. As a result, Salzburg would reach the semi-final stage before being eliminated by Real Madrid.

The following season he would play for Liefering as well as Leipzig. He would also play in the UEFA Champions League. At the start of the next season, he would become an integral part of the first team.

While Sucic has been performing brilliantly for many years, his breakthrough season was the 2021-22 season. Before the start of the season, newly appointed manager Matthias Jaissle promoted him to the first team. And he scored eight goals and provided four assists as Salzburg won their 16th league title. He also scored a penalty against Sevilla in the UEFA Champions League.

Sucic also fares well in terms of creativity. Fbref stats show that he makes 1.8 key passes per 90 minutes. This puts him in the top 18 percentile of midfielders. His Shot Creating Actions (SCA).

It is also high at 2.98 per 90 minutes. In addition, he also averages 2.11 carries into the final third, among the 12 per cent of midfielders.

The youngster also helps his team out defensively. Sucic initiates 1.4 tackles per 90 minutes against dribblers. He also contests 2.98 dribblers per 90 minutes. In addition, Jaissle also prefers a high pressing system. This system requires players, especially midfielders, to press teams in their defensive third. And this reflects in their stats as he makes 5.44 pressures in the attacking third per 90 minutes, among the top six percentile of midfielders.

Red Bull Salzburg have made a name in developing some of the best young talents in world football. With Luka Sucic, they have managed to keep the trend going. Sucic’s rare ability to score a high number of goals despite playing in the middle of the park.

Since Jassle plays inverted wingers, the midfielders act as support for the full-backs. This means that Sucic has to cover a lot of ground which he is an expert at.

However, one thing he could improve is his shooting. His actual goals are less than half of the expected goals. An improvement in accuracy will go a long way. In addition, he would also like to improve defensive work as he sometimes gets caught out of possession, especially during counter-attacks.

Fabiano Parisi: Empoli’s left back is having an impressive start to the season

While Sucic may be a less-than-average shooter, the fact that he still finds lots of opportunities shows how great his vision is. Sucic can create, dribble, and make intelligent runs and is not shy of putting in the hard yards for his team.

There are players who can do it, none of them became such good players at such a young age. He has also performed admirably in not only the Austrian league but also in the Champions League. And he has the same opportunity this year, and with teams such as Chelsea and AC Milan in the group, it presents the perfect opportunity for him to showcase his talent.

He is like Jordan Henderson, who also scores a bunch of goals. If he can iron out his weakness, he’ll be on every top club’s radar next season.

Sucic is bound to make a big club move sooner or later. Liverpool were rumoured to be keeping close tabs on the youngster but decided against signing him. However, Salzburg’s players also have a strong track record of adapting to the big leagues, which will come in handy when he does make his move.

He will be an integral part of Salzburg’s midfield, and a deep run in the Champions League will further strengthen his credentials.

The Croat has always admired the La Liga and said he wants to play for either Real Madrid or Barcelona. His countrymates Modric and Ivan Rakitic have already played at the two clubs and Sucic has the talent to follow them.