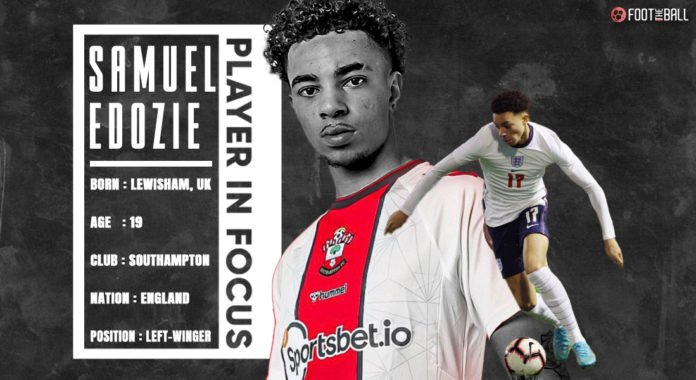 Manchester City won their sixth Premier League title last season, proving themselves as the best team in England. The club has gone from strength to strength ever since the takeover by Sheikh Mansour. The establishment of City Football Group also shows their ambitions and long-term plans. However, one area where City don’t get enough credit is their excellent youth academy. Phil Foden, Jadon Sancho, Kasper Schmeichel, Kieran Trippier, and Daniel Sturridge are some of the top names to come out of the academy. And hopes are winger Samuel Edozie will also join the list.

The City winger moved to Southampton in the summer transfer window. The Saints could pay over € 11 million for the winger. Southampton also signed Romeo Lavia, Gavin Bazunu, and Juan Larlos, Edozie’s teammate at Manchester City under-21. Edozie has been hailed as a future star since joining the academy.

Born in Lewisham, England, Samuel Edozie started his career at Millwall, where he progressed through the ranks quickly. This caught the interest of Manchester City, who moved swiftly to sign the teenager.

The 19-year-old move to the St. Mary’s stadium will get him more game time. While he could not break into Pep Guardiola’s team at Southampton, he has the perfect platform.

How good is Samuel Edozie?

After signing for City, Samuel Edozie was immediately pushed into City’s under-18 team. The winger played 11 games for the youth teams scoring three goals and providing two assists. He also played two matches in the FA Youth Cup, which City won that season.

Edozie is known for his fast pace and immense dribbling skills, which he uses to devastating effect. In his first season at City, Edozie established himself in the team, an impressive achievement. In fact, that season, Edozie would help City win the under-18 league and the FA Youth Cup. His remarkable performance caught the eyes of the club’s hierarchy, who took no time in promoting him to the under-23s.

Man City has buy-back clauses for all these talents. 👀👏 pic.twitter.com/j9qK3Er39J

And just like the under-18s, Edozie’s first season coincided with City winning the Premier League 2 Division 1. Again, Edozie had a brilliant season, making him a fan favourite at the club.

By the end of the 2020-21 season, Edozie had started to stake his claim to be part of the first team. And thus, he was included in City’s squad for the FA Community Shield clash against Leicester City. Although he didn’t start the match, it showed how highly the team rated him.

Edozie would return to the under-23s and help the team defend their title. He also played three matches in the UEFA Youth League.

In his first season in the under-18s, Edozie scored three goals and provided three assists. One of his best performances that season came against Liverpool, scoring one and assisting another. City won the game 4-2. From there on, he has progressively improved himself every season.

When he was promoted to the under-23s, Edozie took to the team like a duck to water. His return of five goals and assists in his first season showed he was not a flash in the pan. Instead, Edozie has performed at levels well beyond his age.

You don’t get a call-up to City’s first team unless you’re someone special. An injury mired his last season in the league, and he missed many games. The biggest concern of Southampton fans was whether Edozie was ready for the Premier League.

However, it took only 17 minutes for the teenager to show his class. Coming on as a substitute against Wolves, Edozie completed three dribbles. That was the most by any player in the match, and he did that in just 17 minutes.

Southampton may end up paying more than €11 million for the Englishman. And it looks likely that it will be worth every penny. Edozie is perhaps one of the league’s most technically skilled young players. In addition, he is also not phased by any occasion and continues to do his job.

Edozie is adept at shooting, assisting, creating, dribbling and crossing. However, his greatest asset is that he already has the experience of winning trophies. Since moving to City, the youngster has won a league trophy yearly. This brings invaluable experience and a champion mentality that is hard to find in such a young player.

The 19-year-old has also made impressive progress season after season, which bodes well for the Saints. Edozie may not become a regular starter in the current season, but his incredible cameo shows he is one for the future.

Southampton have had a less than perfect season and are only three points above the drop zone after six games. While the team has performed impressive against Chelsea and an underperforming Leicester City, their three losses show that Ralph Hasenhuttl still has work to do.

"He [Edozie] showed immediately how hard he is to stop and how good he is at dribbling, and I like this bravery from the young guys who are not scared entering the box. If we can support him, he is a good player."#saintsfc
[HL] pic.twitter.com/Zr4JK5LEfn

And Edozie will play an essential role in that. Southampton have bet big on youth players this season. Last season, the club had finished just five points above relegation. This is a situation Southampton would want to avoid a repeat of it.

It was just five years back that a Manchester City winger went to another club looking for more game time that would further his development. Now Jadon Sancho is one of Manchester United and England’s brightest talents. And Manchester City have also added a buy-out clause which would come in handy if he fulfils his potential. And Samuel Edozie will be hoping his career does follow a trajectory which makes City to buy him back.