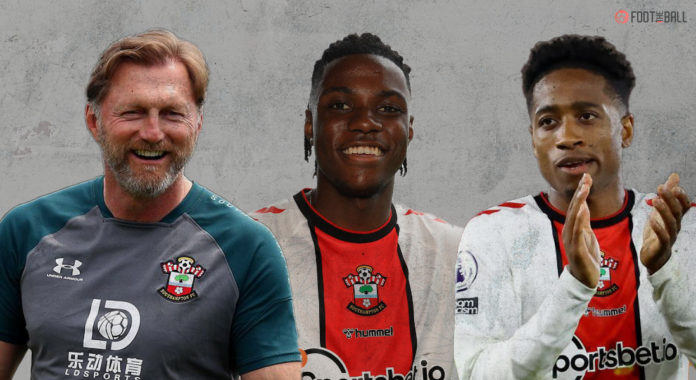 When it comes to Southampton as a team, we shouldn’t just commend the players and the manager for doing an excellent job, but their backroom staff too. Ralph Hasenthuttl’s been part of this project since December 2018 and one of his main strategies this summer was to reduce the average age of the squad by investing in up-and-coming talents. The Saint spent £86m on ten new signings this summer. Four of them were teenagers, while the oldest new arrivals were 25-year-olds Ainsley Maitland-Niles and Duje Caleta-Car. Let’s take a look at their transfer business this season, their strategies throughout the past few seasons, Ralph Hasenhuttl’s contribution and what we can expect from The Saints in the Premier League this season.

Southampton in the summer transfer window

Apart from Ainsley Maitland-Niles and Duje Caleta-Car, The Saints also acquired two youngsters from Manchester City for a combined £16m. Signing Romeo Lavia and Gavin Bazunu is clever business for they have signed two players with high potential from a very good academy. They can now nurture and develop these players, before selling them for a very hefty profit. This is a prevalent form of business to earn profits in recent times and it is not the first time the club has done something like that.

Southampton is a club which likes to give both, players from their academy and newly signed up-and-coming players, a chance to prove themselves, which the top six can’t do. They have signed many players from the top six teams who have made a name for themselves in this Southampton side. Youngsters don’t necessarily get a lot of game time at big clubs, because the stakes are very high. Getting even a few minutes as a substitute late on in the game is very difficult but it all depends on chance and is mostly not worthwhile. It is very hard to make it at the big clubs and it takes as much luck as it takes talent. One example of this is that of Marcus Rashford’s first-ever start for Manchester United. He was brought into the starting eleven after Anthony Martial suffered an injury last-minute in the build-up to a UEFA Europa League tie against Midtjylland. Rashford scored twice in that game and quickly established himself. Later that week, he scored twice on his proper Premier League debut against Arsenal and became an immediate fan favourite.

Most players aren’t this lucky and chose to leave the club for a team where they will actually get respectable game time. This is what Southampton believe in doing and they are not afraid of giving young players a chance, even in big games.

The Saints have a set mentality. They have to sign players who show signs of potential from other clubs while also having faith and promoting players from their own youth academy at the same time. They have signed many players from top clubs for a steal. These players have delivered when they have played for the side and have often gotten into the limelight for playing so well after costing so cheap. We will discuss a few of them.

Tino Livramento is a right-back, who can also transition into the right midfield spot while attacking. The Saints bought him from Chelsea after he had grown up playing for the Chelsea youth academy in August 2021. He was one of Southampton’s best players last season in the 2021/22 campaign, scoring and assisting once while keeping 6 clean sheets. He looked solid at the back and lively while going forward. He created many chances while attacking. He impressed the fans in a heartbeat and showed the enormous potential he has.

Any words said for Romeo Lavia are less and the Belgian midfielder is a great presence on the pitch. The Saints signed him from Manchester City for just £11m. He had a good run for Manchester City after a string of excellent performances in the Premier League 2. Lavia was scouted by Southampton who brought him to Saint Mary’s Stadium. The tough-tackling midfielder has already made a very strong impression on the fans and on the people who watch the league in general. He is a defensive midfielder with a lot of spark, and has got goals in him. Fans are excited to see him on his journey to becoming the player he has the potential to be.

What makes the kid so special? Tap to find out!#Laviahttps://t.co/EJNP7Aa33F

Samuel Edozie is another youngster The Saints signed from Manchester City this season. He is a left-winger who played for the Man City U21s and signed for Southampton on deadline day on a 5-year deal. After impressing in the Premier League 2, the fans should be looking forward to watching him play and make a name for himself in the top flight.

Samuel Edozie thanks two former teammates, and wants to follow in their footsteps at #SaintsFC:

Kyle Walker-Peters signed for Southampton on a permanent deal from Tottenham in August 2020 after an impressive loan spell at the club starting January 2020. He spent most of the time at the North-London club, who used to play for their U18s since the 2014/15 season. He mostly plays right-back but is comfortable on either side and can easily convert to the left area of the pitch as well. He has so far played 68 times for The Saints and racked up 2 goals with 4 assists while keeping 15 clean sheets. He is an excellent full-back with a good ability to defend and go forward. He has become one of the fan-favourites in recent times.

Armando Broja is an example of a player who joined Southampton on loan searching for a breakthrough. The Albanian international joined on a loan transfer from the Chelsea U23s before the start of the 2021/22 season. He played 32 games and scored 6 times for The Saints. Even though his stats aren’t the best, he is still regarded as a great talent. He is sharp with the runs he makes and the one-two plays he tries to have. He has since returned to Chelsea from his loan. Chelsea are struggling at the moment and given the opportunity by Thomas Tuchel, he will look to make his mark.

Since joining the club in December 2018 after Southampton sacked Mark Hughes after just eight months in charge, Ralph Hasenhuttl has established his name as a good and exciting manager. There have been ups and downs along the way and there can be bad results in the future. But, this won’t change the new energy and positivity Hasenhuttl brought with him to the side. He trusts younger players and isn’t afraid to give them a start. Even though younger players are inexperienced and are more likely to make mistakes, they give everything they have and show no fear on the pitch. Young players know how big of an opportunity it is to play for the main team, so they don’t take it for granted and Hasenhuttl understood that.

Ralph Hasenhüttl has agreed a two-and-a-half-year deal with #SaintsFC and will take over at the club tomorrow!

He has worked beautifully with the backroom staff, identified the right players and brought them to Saint Mary’s Stadium. He has the full backing of the board and has delivered results. He finished 16th in his first half season at the club in 18/19. He took The Saints upto 11th in the 19/20 season but finished 15th in the 20/21 and 21/22 seasons.

The Saints have had a fairly decent start to the new campaign. They beat Chelsea in a match where the entire team put up an exceptional performance. After some excellent transfer business and a manager who knows how to get the best out of his players, this can very well be the season Southampton turn it around and finish in the top half of the Premier League table.

Wins are ALWAYS to be celebrated 🙌 pic.twitter.com/TTSmSBgY8z