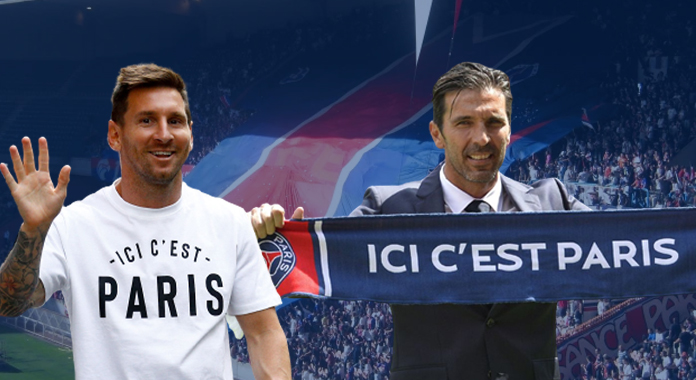 French football. The top-flight league of France has always been dominated by a particular club for a long period. Be it, Saint Etienne, in the 1960s, Marseille in the late 1980s and early 1990s, Lyon at the start of the 21st century and currently PSG since the last decade.

The capital club in particular have had an extended run of top-flight wins and their supremacy looks set to continue. The Les Parc des Princes outfit have won 8 league titles since 2010 and they don’t seem to slow down either. French football might be considered by fans under the ‘Farmers League‘ category, but they certainly do have a rich history.

Speaking of rich history, Paris Saint-Germain are one of the few clubs in France that compete with some of the very best clubs around the world. Under that rich history is their chant Ici C’est Paris which has carried its legacy from generation to generation. But how much do the fans know about Ici C’est Paris and what does it mean?

When Qatar Sports Investment(QSI) bought PSG in 2011, the capital club had just one European trophy under their name. The then new president, Nasser Al Khelaïfi, had one ambition: to transform the club into a global sports brand. His ambition? To play on the same level as the biggest names in sports, to be spoken of in the same breath as the New York Yankees and the Chicago Bulls.

Eleven years later, the transformation is undeniable: Neymar, Messi and Mbappe, two of the four best players in the world, grace the PSG roster. Nasser Al Khelaïfi has been ruthless when it comes to his hiring and firing policy when new PSG manager Christophe Galtier replaced Mauricio Pochettino and Luis Campos taking on the Director of Football role.

With so much chopping and changing in the clubs’ history, one thing that has remained constant is their Ici C’est Paris chant. When translated to English, Ici C’est Paris simply means “Here is Paris” or “This is Paris”. Often chanted during home games by fans, the slogan has been popular with the club since the 1990s. It’s also the same motto that can be seen on PSG’s official merchandise.

By bringing together innovation and culture, Paris Saint-Germain, a club of the new generation, has not only advanced its brand andIci C’est Paris, a motto of its own, but is charting the way for the future of football. To the great satisfaction of its shareholders, it must be said – acquired for €70 million in 2011, Paris Saint-Germain is worth more than €3 billion today.