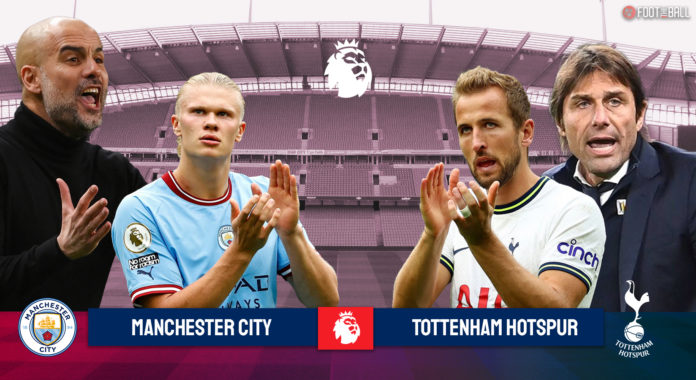 After six games in the Premier League, Manchester City and Tottenham are placed second and third in the Premier League table. Both the clubs splurged cash in the summer to improve the quality of their squad, which looks to have paid off. Pep Guardiola’s team signed Erling Haaland as they needed an elite-level striker who guaranteed them goals. And the Norwegian has gone beyond expectations, racking up ten goals in six matches. Others who joined the club were Kalvin Phillips (signed from Leeds), Manuel Akanji (signed from Tottenham), and Sergio Gomez (signed from Anderlecht).

Meanwhile, under Antonio Conte, Tottenham have started the season brilliantly. The club spent € 170 million to acquire quality additions across the pitch. The club signed Richarlison and Christian Romero from Everton and Atalanta, respectively. Conte usually prefers a three-person defence, so the club added two talented young wingbacks in Djed Spence (signed from Middlesbrough) and Destiny Udogie (signed on loan from Udinese). However, one of their best acquisition was midfielder Yves Bissouma signed from Brighton.

Tottenham and Manchester City have currently tied on points, with City ahead on their superior goal difference. The Cityzens remain unbeaten, but their draws against Aston Villa and Newcastle show that there is still work to do. However, with their midfield and attack in top form, City are the clear favourites for the Premier League title. The team has also started its UEFA Champions League campaign in style thrashing Sevilla 4-0.

When Antonio Conte was appointed Topttnahm manager, he demanded significant signings. Daniel Levy delivered them, and now Conte has made Tottenham a powerful contender for the top four. Like City, Spurs also remain undefeated with four wins and two draws. However, the lack of goals is something that will concern Conte. After Harry Kane (who has scored five goals in the league), the second highest scorer in the team is defensive midfielder Pierre-Emile Hojbjerg.

Pep Guardiola was without Aymeric Laporte, John Stones, and Kyle Walker for the Sevilla clash. However, after the win against Sevilla, Guardiola said that all three players were unlikely to feature against Tottenham. This means new signing Manuel Akanji will slot in at centre back alongside Ruben Dias.

Walker’s absence means Joao Cancelo will play as a right-back, with Sergio Gomez continuing at left-back. Rodri, Bernardo Silva and Kevin de Bruyne will continue in the midfield, while Riyad Mahrez could replace Phil Foden.

9 – Erling Haaland has scored more goals than 15 of the 20 Premier League teams so far this season. HaaHaaHaa. pic.twitter.com/JDsuXnvxoT

Meanwhile, Tottenham only misses Lucas Moura and has a fully fit squad to choose from. Conte uses a three-person defence, and this is what will be deployed against City. In the middle is the duo of Yves Bissouma and Hojbjerg. It will be supported by wingbacks Ivan Perisic and Emerson. Richarlison had struggled since the start of the season. The Brazilian has yet to open his account in the Premier League. However, he announced his return to form in spectacular fashion in the Champions League. The 25-year-old scored a brace againt Marseille to help Tottenham to victory in their opening match.

The Manchester City squad is filled with world-class players. However, based on the current form, it is hard to look beyond Haaland and de Bruyne. The Norwegian has had an immediate impact and could break the record for most goals in a single Premier League season. And providing the perfect through balls is De Bruyne, their star performer for the last seven years. Meanwhile, Bernardo Silva remains the jack of all trades performing the box-to-box role to perfection.

🗣️ "The numbers speak for themselves."

For Tottenham, Harry Kane, like every season, has been the star. With five goals, he is the third-highest scorer in the league. Elsewhere, Hojbjerg has been the steel in the midfield and scored two goals. However, the defensive trio will be the key if they want to keep City at bay.

Manchester City and Tottenham are both in top for

m at the moment. After Arsenal’s loss to Manchester United, there is only one point difference between the first and third-ranked teams. So a win for any team will be a massive boost for them.

While Tottenham are in great form and playing a compelling football brand, facing Manchester City at Etihad is a different proposition. The team are playing like a well-oiled machine that can rip apart any team to shreds with Haaland the tip of their sword.