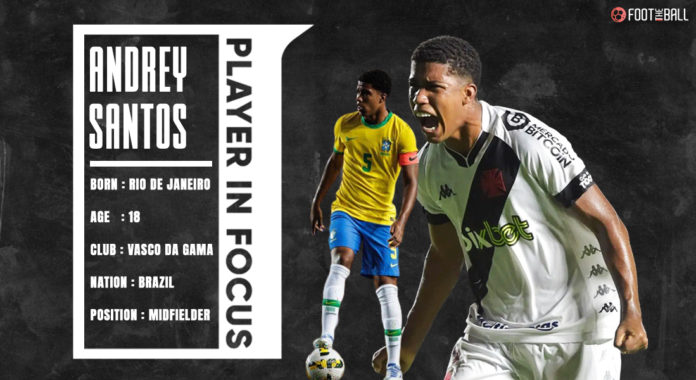 Chelsea have had a struggling start to the 2022/23 season. Most of their new signings have not worked for them due to form or injuries. The Blues’ ‘Vision 2030’ is in full flow and their latest signing Andrey Santos is a huge part of that vision.

Chelsea had contacted CR Vasco da Gama, the Brazilian side from Rio de Janeiro, over a possible transfer of starlet Andrey Santos. Santos has impressed scouts from all over the world with his performances in the youth academy. Here’s a deep dive into Andrey Santos, his playstyle and what he can offer to the team.

Another interesting link out of Brazil. Certainly a market #nufc are looking at https://t.co/nVYwaTTppk

How good is Andrey Santos?

Andrey Santos is an 18-year-old defensive midfielder who currently plays for CR Vasco da Gama in Serie B, the second tier of Brazilian football. He was part of the club’s youth academy and got promoted to the first team very recently in January 2022. His journey to this point was very tough. He was an overweight toddler who shared the same love for football and joined a local futsal club in Rio de Janeiro. He worked his way to shed his baby fat to be able to play the sport properly. He finally managed to impress the scouts at Vasco da Gama and he has since then gone on to become the club’s youngest debutant.

He is set to stay at the club for another season with the club already working to make him sign a new contract. However, this is tough when teams like Newcastle United come knocking. PSG, Barcelona and Everton are some other clubs who are heavily interested. The lure coming from Europe would be very hard to resist for the youngster and it is very likely that he moves to a different club very soon. Vasco da Gama are looking hopeful that they will be able to get a fair price for him, expected to be around £30m pounds.

Santos is a defensive midfielder who can transition as a box-to-box midfielder. His mentality is already the best it can be and he keeps his standards high for himself. He recently said in an interview, “I’m very focused, serious, and with a winner’s mentality. I want to win all the time, and I don’t let my team-mates to rest, because I always want to evolve.” He shone in his first full season of senior football at the club and there is no doubt why big clubs are interested in signing him. They see a long-term option in him with an already outstanding work ethic and enormous potential.

He wears the No. 8 jersey following the footsteps of one of his idols, Juninho Pernambucano. Juninho said, “Physically, he is a monster. Without the ball, his participation in the game is total. I wanted to see his GPS, because he doesn’t stop! And technically, he’s way above the others. He’s not going to be better than me, he’s going to be much better than me. He is a much more complete player. At 18, I didn’t play half as much as he does, I’m not ashamed to say that.”

After being promoted from the youth academy at Vasco da Gama, Santos has gone on to play 27 times for the senior team. Even though it is for a team which plays in the second division, the youngster has valuable first-team experience under his belt which many players of his age don’t enjoy. He has played nearly 2,000 minutes and has 5 goals under his name. What’s more impressive is that four of his five goals have come from playing in the holding midfielder spot.

He isn’t just gaining minutes at the club level but has also established himself at the international level. He is part of the Brazil U20 squad and could go on to represent his country if Brazil go on to qualify for the U20 World Cup in Indonesia next year.

One of the Brazilian’s most prominent attributes is his passing ability. He is good at tackling the ball and when he retains the ball, he is press resistant. His ability on the ball alone makes him a very good asset, who will continue to grow, no matter what team he plays for. He always gives everything he has got. He screens the defence well while creating chances in the final third.

He brings more than one dimension to his play. He has excellent stamina and ball progression ability to create chances for his team. He has been nothing short of impressive scoring goals from both open play and set-pieces.

Vasco’s veteran midfielder, Nene, recently said in an interview, “ “It doesn’t even seem like he’s this young. “He has an incredible maturity in training, it seems like he has been with us for many years.” Andrey has also surpassed Vasco academy graduates Philippe Coutinho, Douglas Luiz and Allan – all of whom now play in the Premier League – in terms of what he has achieved at such an age.

Santos is a player who is already so ahead of the curve, being just 18 years old. Chelsea have a clever transfer strategy where they want to lower the average age of the squad. Considering most of the team’s important players are above the age of 30, there is a much needed revamp, starting with long-term investment in young talents.

This may make it difficult for Santos to get into the first eleven, should he move to Samford Bridge. But, there is a big reason why he is perfect for Chelsea. The Blues’ new owners are keen to achieve long-term success and win titles. They know this means signing top stars alongside young talent, such as Santos.

Andrey Santos will grow and nurture in this Chelsea side. He already has huge potential which needs to be exploited correctly. A player of his character and mentality must continue to grow in the right environment full of challenges, such as a taste of English top-flight football. A club like Chelsea would know how to get the most out of him and he will get more chances than ever to prove himself, should he move to the Premier League side. He has priceless experience under his belt, a unique playstyle, many praises from legends, big dreams and a point to prove.