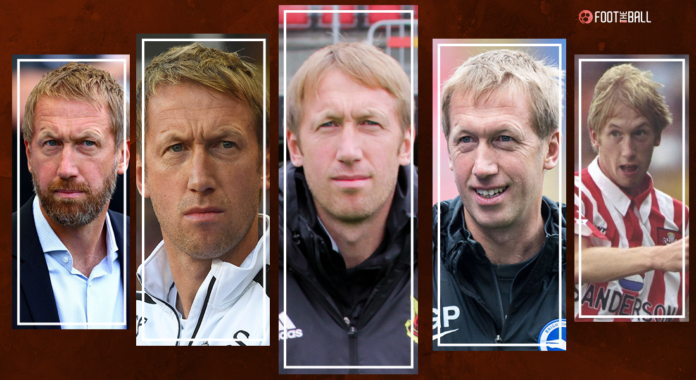 The Premier League season began just a month back and has already seen two managers getting the sack. What makes it more interesting is that these two sackings are seen as harsh decisions. First, it was Scott Parker who was fired from his job. And Chelsea’s Thomas Tuchel was the latest victim. The German was signed. The club had signed several players in the transfer window. Raheem Sterling was brought to strengthen the attack.

The club also signed Wesley Fofana for a club record fee. He was joined by Marc Cucurella (signed from Brighton) and Kalidou Koulibaly (signed from Napoli).

The German was fired after Chelsea’s underwhelming start to the season. Brighton & Hove Albion’s Graham Potter was the frontrunner to replace Tuchel at Stamford Bridge. The Englishman who master-minder Brightopn’s resurgence is among one of the most under-rated managers in the league. Potter would become the second manager under new owner Todd Boehly.

The 47-year-old has made his name as a manager who has helped teams massively over-perform. However, he has spent his entire career at small clubs where the pressure to perform was not as high as it will be at Chelsea.

Potter played most of his career in the lower leagues, such as Division Two, League Two, and the Conference. And at the age of 30, he quit football. In an interview with The Coaches Voice, Graham admitted that by age 30, he had stopped enjoying football. “If I’m honest, by then, I’d stopped enjoying playing. At the time, that was quite a powerful thing for me to admit – playing football was all I dreamed of as a kid. But I’d reached the stage when I stopped feeling my career was progressing,” he said.

Potter added,” I needed another career after football. It meant I had to be proactive”.

Graham Potter married Rachel on May 31, 2003. However, his wedding was the stuff of Hollywood movies. On the day of his marriage, his then club York City decided to release him as a player. The Englishman had spent three years at the club when the club was in dire consequences.

Potter, however, now shrugs the incident off as nothing significant. In an interview with The Athletic, Potter said he got the news just before his wedding. And during his first dance at the wedding, he informed Rachel of the news.

It’s great to see a coach like Graham Potter land a top job – a manager who’s put in the hours and done it the hard way.

A Masters degree in leadership, seven years in Sweden, major progress at Brighton. He’s overcome every hurdle so far and thoroughly deserves the chance. #CFC pic.twitter.com/IczNsBPcNE

Apart from his magic from the sidelines, Potter was also a brilliant student as his mum wanted him to have a degree as a solid back-up for football. And thus, he embarked on a degree in social sciences from an Open University. During his time as York City manager, Potter would read books on American politics European Union. He was also a math genius and enjoyed learning Arts, Sciences, Spanish and Geography.

He would complete his bachelor’s degree before going into football coaching. Speaking to The Athletic, Potter said, “What I liked about the study was that you could do a piece of work, somebody would give you a mark, and nobody could take that away from you”.

Masters in Leadership and Emotional Intelligence

Potter is a master man-manager, and he points it down to the Master’s degree in leadership and emotional intelligence at the Leeds Metropolitan University. Potter said that this course helped him become a better manager and not panic in pressure situations.

The managers said that he shared his class with people who had served as a part of the allied forces in Afghanistan. His tutor had also served in the British military. His other classmates were surgeons. Potter credits this degree with helping him in becoming better at managing stress and failures.

England is a country where football and cricket are both popular. Several footballers and managers grew up playing or watching the gentleman’s game, and Potter is no exception. During 2005, Potter was the football development manager at the University of Hull. And his salary was reduced from £ 30,000 to £ 17,000. However, what kept him motivated was cricket.

That summer witnessed one of the greatest Test Series ever in cricket history. England had failed to win the Ashes since 1986-87. However, they would break that record in the summer of 2005, which was full of twists and turns.

“It came at the right time for me. I’d stopped playing, I was OK with that decision. It was the Ashes 2005, so that kept me entertained and then I started to get a little bit itchy,” he said.

If Chelsea get Graham potter…

He would have gone from uni football coach for Hull University and Leeds Met 15 years ago to Brighton via Sweden to one of the top clubs in World Football.

A master of disguise

Graham Potter, in his three years, has managed to turn Brighton from a boring long-ball side to a team playing expansive football. Due to this, he is a fan favourite at the club. Unfortunately, this means that he is always hogged by fans whenever he goes out in public.

As a precaution, Potter disguises himself to enjoy his team peacefully. “It came at the right time for me. I’d stopped playing, I was OK with that decision. It was the Ashes 2005, so that kept me entertained and then I started to get a little bit itchy,” Potted said.

The cold misery in Sweden

When Graham Potter took the job as Ostersund, one thing he grossly underestimated was the harsh weather. In fact, when his family arrived in the city, they were not anywhere near dressed to handle the minus 20-degree weather. The situation was so extreme that his wife Rachel immediately requested blankets.

Ostersund is known as the ‘winter city’ with temperatures going down as low as minus 30 degrees. In the first few weeks, Potter couldn’t even go to the team’s training as it was not possible to conduct drills in the harsh weather,

Slept in a church for charity

In 2021, Brighton launched a campaign for homelessness. It was called Rough Sleeping. Under the campaign, Potter, Billy Reis, his assistant coach, and first team manager Bruno slept at Brighton’s St. Peter’s Church. It was conducted by a charity called ‘Off The Fence’.The charity organises Big Sleep Out events to promote the issues of homelessness.

After participating in the event, Potter said, “We had an easy version of sleeping rough, but it still gave us an insight into the challenges the homeless community face on a daily and nightly basis.

“Having experienced just one night out on the street, I cannot imagine what it would be like suffering in this way with no idea of what the future holds or where the next meal might be coming from.”

Emphasis on art and a deputy rapper

Potter is known for his innovative coaching methods. And one of these involves players being more involved in arts and cultural activities. During his stint in Sweden, Potter organised an open-air rock concert and also made a version of the Swan Lake ballet.

Potter took the help of local artist Kevin Wahlen to form a spirit of harmony and togetherness in the club. His assistant Billy Redi also penned a rap which he performs now and then.

A statue in Sweden

Potter worked miracles in Sweden during his seven-year stay. He took the club from the fourth tier of the Swedish football pyramid to the Europa League. It was one of the most incredible football resurgence stories in the last decade.

And as a sign of respect, an idea was mooted to build a statue of Potter back in 2017. A fan first proposed the idea. However, it gathered so much steam that it was discussed in the city council. In the end, the idea was shelved because of Potter’s reluctance.