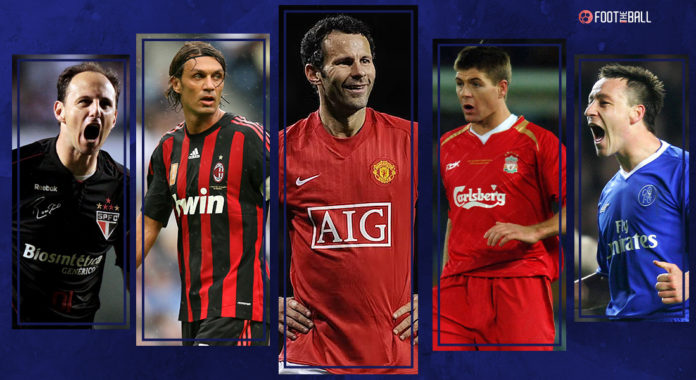 In football, transfers are a common part of the game. Before the beginning of any season or in the middle of it, several players change clubs, some for record fees. The reasons behind transfers are many, but the majority are due to money or a chance of winning regular silverware. These two reasons are the most used to snap a player away from his club. However, some players have been immune to this allure of wealth and trophies throughout history. These players spent almost their entire careers at a single club.

The phenomenon of playing for a single club throughout your entire career is scarce in football. The rise in a club’s financial status helps them pay the huge transfer fees and players’ salaries. However, the players on the list were not fazed by these.

So, here are the top 10 players with most appearances for a single club.

Carles Puyol was a no-nonsense defender who marshalled the Barcelona’s defence for over a decade and won an impressive 18 trophies. He also won the FIFA World Cup and the European Championship with Spain. Puyol represented the Catalans 682 times and spent 19 years at the club, making one appearance for Barcelona C and 89 appearances for Barcelona B.

Puyol also captained the club for ten years, from 2004-2014 during which they became a force in Spain and Europe, playing their famed tiki-taka style. He is the only captain apart from Manuel Neuer to win a sextuple.

The only player who rejected Florentino Perez before Kylian Mbappe, Francesco Totti, played his entire career at AS Roma. The charismatic Italian spent 24 years at the Stadio Olimpico, where he won five trophies, including one Serie A, two Coppa Italia, and one Supercoppa Italiana. The “Il Gladiatore’ scored 250 goals and provided 181 assists in 707 appearances for AS Roma.

He also won the 2006 World Cup with Italy. Totti is also the second-highest scorer in Serie A, with 250 goals, just behind legendary striker Silvio Piola. Totti retired in 2017 and was then appointed the manager. However, in 2019, he left the club, announcing his resignation in a press conference and accusing the club’s top hierarchy of not involving him in the team’s decisions.

The man with a ferocious right foot, Steven Gerrard, is one of the best players to don the Liverpool jersey. Gerrard made 710 appearances for the Merseyside club between 1998 and 2015. During this time, he scored 186 goals and provided 145 assists. He also captained the club between 2003 and 2015.

He won eight trophies at Liverpool, which included the 2005 Champions League final win against AC Milan. This remains one of the greatest comebacks in football. He won every trophy with the club except the Premier League. He left the club in 2015, playing a year at MLS club LA Galaxy before announcing his retirement.

John Terry is one of the best defenders to ever play in the Premier League. The Englishmen won 17 trophies during his time at the club. This included five Premier League titles, five FA Cups, three Football League Cups, two FA Community Shield, one UEFA Champions League and one UEFA Europa League.

Terry is also their most successful captain, leading them from 2003 to 2017. He made 713 appearances. In the Premier League, the centre-back kept 214 clean sheets, the most by any defender ever. In 2017, he left the club for a season at Aston Villa before retiring after a formidable career.

One of the best midfielders to ever grace the game, Paul Scholes was the heartbeat of Manchester United’s midfield for years. He represented the Red Devils for 718 appearances scoring 155 goals and providing 75 assists. During his time at the club, Scholes won 25 trophies, including 11 Premier League titles and two UEFA Champions League.

Andres Iniesta on Paul Scholes: "One day in La Masia Rijkaard walked in and said, 'Today we don’t train, we are going to watch a DVD'. We sat for 3 hours watching Scholes highlights. It was the best day of my life."

The English midfielder retired in 20112 but returned a year later to play an additional 42 matches. He is the third most capped United player, including only league matches behind Ryan Giggs and Bobby Charlton. Speaking about him, Barcelona legend Andres Iniesta said, “Without a doubt, my biggest regret in football is not playing alongside Paul Scholes.”

However, he failed to win the Premier League title in his career. Carragher was also part of the 2005 Champions League final in Istanbul. Carragher retired in 2013 and has now gone into punditry for football matches.

Jack Charlton is considered one of the top players to play for Leeds United. The defender played for 21 years at Elland Road. During his time at the club, the player won seven trophies. In addition, he was also part of the England team, which won the 1966 World Cup. He still has the record for the most appearances for the club.

Charlton also had a successful managerial stint after his retirement. He was at his best as coach of the Republic of Ireland. During his tenure, the team qualified for two World Cups in 1990 and 1994. In addition, he also got them to the 1988 European Championship.

Perhaps the greatest defender to ever play the game, Paolo Maldini was a rock in AC Milan’s defence for 24 years. And in this period, he won an impressive 26 trophies, including seven Serie A titles and five Champions Leagues. He also played in the famous Libero position. His father, Cesare Maldini, was also a Serie A winner and his son Daniel Maldini also plays for the same club.

Paolo Maldini at his best! pic.twitter.com/Rv9hn1ASEz

Talking about his greatness, legendary defender Franco Baresi said, “He was very young, so I tried to give him some advice. But he needed very little; he was already a great player.”

He also served as an interim manager for the Red Devils. He also managed the Wales football team between 2018-2022. However, his time as the national team boss was cut short after he was accused of sexual assault by his ex-girlfriend Kate Greville.

In a game where even some midfielders failed to score more than 100 goals in their career, Rogerio Ceni has managed to do that as a goalkeeper. The shot-stopper has played a mind-boggling 1237 appearances for Sau Paulo. He won 20 major trophies at the club, including three Campeonato Brasileiro Serie A, four Campeonato Paulista, two Copa Libertadores, and one FIFA Club World Club.

Not bad stats for centre-half, full-back or even a defensive midfielder.

No keeper in the history of the game has scored more goals than him. pic.twitter.com/5nWatFj7yZ

He was also a brilliant penalty and free kick taker scoring 131 goals in his career. He won the 1997 Confederation Cup and the 2002 FIFA World Cup on the international stage.