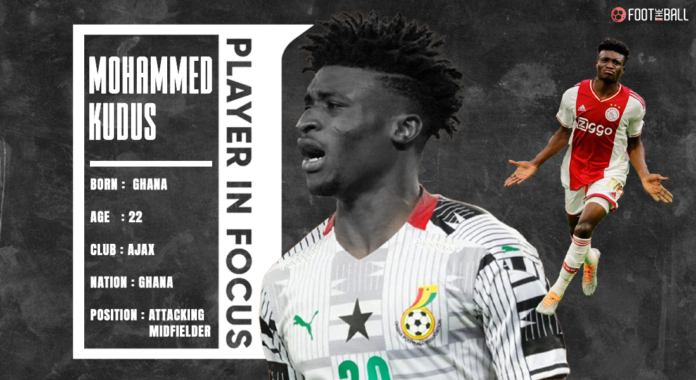 A skillful midfielder like Mohammed Kudus with impeccable awareness and exquisite ball control can bring a lot to any side, let alone a very young Ajax side which was in dire need of their players to step up. Ajax’s scouting system is second to no one else. The way they always manage to scout young and promising talents from all over the world in different leagues is extraordinary.

Ajax go through a total rebuild every 3-4 years where they sell the majority of their big players in the transfer market to big clubs. This is why they are constantly on the lookout for new players to add to their roster and they don’t disappoint. Ajax appointed Alfred Schreuder as manager under whose supervision they signed big players like Steven Bergwijn, Lucas Ocampos and Owen Wijndal this season. However, it’s one of the players who was there last season who has stepped up this year, in remarkable circumstances!

The 22-year-old starboy Mohammed Kudus, who has been banging in the goals this season playing as a striker, despite not wanting to be one!

Who is Mohammed Kudus?

Mohammed Kudus spent his young years playing pick-up football from a young age in Nima, the suburb of Ghana where he grew up. This fashioned certain skills within his game that are still apparent now. He joined the Ghanaian Right to Dream Academy at the age of 12. In January 2018, he joined the Danish club Nordsjælland where he became the ninth-youngest player to make his debut in the history of the club.

On 16 July 2020, Kudus signed for Eredivisie giants Ajax for €9 million, on a five-year contract. At Ajax, Kudus was discovered and grew as a player. He got into the limelight after some very impressive performances. Ajax started the 2020/21 Eredivisie season with the usual expectations of finishing at the front of the pack and Erik ten Hag was intent on allowing Kudus to contribute as much as possible to that effort.

In a solid debut, Kudus displayed a lot of the qualities that had attracted the Amsterdam club to him in the first place, a good sign for games to come. Unfortunately, he suffered a very bad meniscal injury in October during his first season at Ajax which kept him out for nearly three months. He suffered many more injuries which kept him sidelined for a while but in the end, he came back stronger than ever. He definitely made his mark and had established himself in this Ajax side.

Mohammed Kudus suffered from multiple different injuries since his arrival at Ajax last year, which kept him sidelined for over 170 days in total so far.

During his time at Denmark, Mohammed Kudus bagged 14 goals with 3 assists in 57 appearances for Nordsjælland.

In his first season at Ajax, he scored 4 goals and assisted 3 times in 22 matches as a central midfielder who can transition to an attacking midfielder. Last season, the Ghanaian midfielder managed to play 25 games for the Dutch side and scored 6 goals, just assisting once in almost 800 minutes.

Mohammed Kudus’ biggest strength is versatility and this trait has shown since his time in Denmark. In the Superliga, he often played as one of the more advanced midfielders in Nordsjaelland’s 4-3-3 formation. At times he featured as a number 10 when Nordsjaelland played with a 4-3-1-2 even though that was not a very regular occurrence.

His second most common position was actually as a forward. Playing in such advanced areas, the emphasis for him is less on driving forward with the ball and keeping play ticking over, but more about combining with midfielders and picking up good positions in the box to finish off moves. In the 2019/20 season for FC Nordsjaelland, Kudus averaged 0.50 goals per 90 which could easily be attributed to the time he spent up front. A cursory glance over his shooting numbers would prove the same. Averaging 2.4 shots a game as a forward and 2.7 a game in midfield proved he is just as offensively active when he plays a more withdrawn role.

For Ajax last season, he was deployed mainly as a central midfielder even though he rotated into more advanced positions at times. He occupied more central positions and depending on his midfield partners and the opposition Kudus drifted closer to the centre backs or in similar areas to the forwards. This was a slight shift from his role in the Superliga where he displayed a right-side bias in his movement. By doing so he could open up good angles to spread play and find passes forward with his stronger left foot. Also, he holds on to possession when under pressure. This trait is even more valuable now in the age of counter-pressing with more teams attempting to suffocate opponents quickly and completely in order to try and regain possession.

Kudus had a slow start to the new season, staying on the bench most of the time. However, the manager identified his potential. He has prominently played as a central forward and scored 5 goals assisting once in just 8 appearances. He even scored his first-ever Champions League goal recently.

Side note: This pass from Mohammed Kudus was ridiculous 😮‍💨pic.twitter.com/0mh3zreLk8

Alfred Schreuder has identified Kudus as an important player for his project at Ajax. The team looks like a complete unit and Kudus looks an integral part of it. His future looks bright and the way he has been playing recently might attract attention from big clubs next summer.