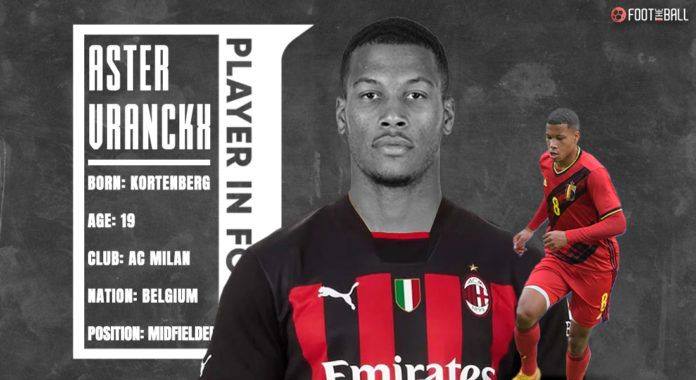 Football might have been at a standstill 2 years ago during the global pandemic, but that didn’t get in the way of an unknown 17-year-old taking the Belgian League by storm, who was linked with powerhouses across Europe. The country from which the latest wonderkid hails from this time is Belgium.

Aster Vranckx is the latest addition to the Rossoneri’s list of summer signings. Born on 4 October 2002 in Erps-Kwerps, halfway between Brussels and Leuven, the young midfielder joined AC Milan from Wolfsburg. The German club bought him in January 2021 from Belgian side Mechelen, with whom he had completed the latter stages of his youth career and made his first-team debut at the age of 16 in August 2019.

While AC Milan were busy completing the change of ownership from Elliott Management to RedBird Capital, they also managed to agree on a deal for Aster Vranckx with Wolfsburg.

Of Congolese descent, Vranckx came through the ranks of Belgium club KV Mechelen where he reportedly caught the eye of a number of European clubs, before putting his future in the hands of Wolfsburg. So what can the Rossoneri expect from the Belgian?

How good is Aster Vranckx?

Vranckx, who is Belgium born but of Congolese descent, played for the Mechelen youths and U18s before being promoted to the senior side in summer 2019. After making his pro debut in the 2019 Belgian Super Cup, he got his first taste of the Jupiler League as a 38th-minute substitute in a goalless draw with Anderlecht, aged 17.

The coronavirus pandemic halted the season two months early, but not Vranckx’s progress. The 6’0″ right-footer had started the majority of Mechelen’s league games in 2020/21 before penning a four-year deal to join Wolfsburg in summer 2021. The Belgium U21 international made his Bundesliga debut as a substitute in the 2-0 loss to Union Berlin on Matchday 8 of 2021/22.

Vranckx who is 183cm tall, uses his frame to shield the ball away from his opponent while he has the quick feet to turn or change direction making him a tricky customer for players to deal with. His ability to make runs into space, especially in the final third of the pitch makes him a tricky customer.

He has the ability to start and finish counter-attacks because of his high work rate and anticipation at the defensive end, supported by his tendency to run at the opponent’s goal and shoot.

Vranckx presses a lot and his team have successfully achieved turnovers with his pressing. He also has a very high percentile for tackles won. He has a high percentile in terms of Shot Creating Actions through his dribbling, while he ranks a very good 85 percentile for dribbling past players. At 183 cm tall and a weight of 78 kg, he is more than ready to physically compete on a senior level.

He averages 27.54 passes per 90 with 83.41% accuracy. Vranckx makes a lot of off-the-ball movements as he likes to move through the channels to create space for him and his teammates as well. The teenage midfielder likes to get into dangerous positions and his 0.29 xG per 90 suggests just that.

Vranckx is averaging 1.28 shots per 90 with an accuracy of 30.8% shots on target. He is averaging 4.3 interceptions per 90. He wins 61.45% of his defensive duels which is impressive, while he is already strong enough to clash with more experienced players.

Milan debut for Aster Vranckx tonight and the 19-year-old is undoubtedly an exciting player. Box-to-box CM who excels off the ball with his intensity and ability to regain possession. Also pops up in and around the box at times to get shots off. pic.twitter.com/iVR1ocZTqW

Perhaps Vranckx’s strongest area is his ability to play the ball. His good first touch, his close control and his ability to hold up and retain possession is very good for a player only 19 years old. He is more comfortable playing in central midfield as a box-to-box midfielder than playing a defensive midfielder.

Vranckx likes to play on the wings and likes to take on full-backs and wide midfielders of the opposition. He occupies wider areas of space and likes to receive the ball and either create a 2v1 with the wing-back or make space for runs from his attackers.

The young Belgian is not the silkiest of passers but most of the time prefers the safest option instead of trying a risky through ball and losing possession. This means he keeps the play ticking and recycles possession. His defensive forte is his ability to intercept passes and use his long legs to tackle. One of his main methods of doing this is to anticipate the play, His tackles are also clean and he reaches out to the ball very well.

Vranckx has real long strides and covers ground really quickly. His acceleration to reach his top speed is very fast and it is difficult for defenders to anticipate his moves. If asked which player he resembles the most he looks more like Renato Sanches rather than a Franck Kessie mould of midfielder. This would lend credence to the idea that Pioli is slowly planning to change his structure from a double pivot to a midfield three.

After tasting Scudetto success after almost a decade in Serie A, AC Milan fans may not like the approach that the club are taking, especially after being linked with much more established midfield targets. But Milan are building something with players that could be a formidable core in time.

Vranckx is a part of this and he could well become a wonderful player if given the right patience and opportunities, adding to a group that means in years Milan could be a dominant team in Europe. The Belgian had been given a limited role at Wolfsburg last season, which helped in his decision to make a change in scenario and eventually join the Italian champions. The 19-year-old midfielder has joined initially on loan, but Milan have an option to make the transfer permanent.

It is clear that the Italian club look at Aster Vranckx as a long-term investment and a move for the midfielder is more than likely to materialize. Nonetheless, AC Milan will hope that the Belgian returns to his best form this season and plays an important role in their campaign.