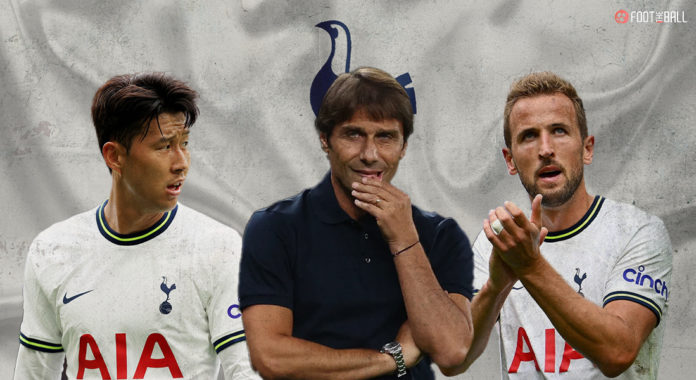 Tottenham haven’t had a good start to the season even though it doesn’t look bad on paper. Recently, they were handed their first loss of the season in all competitions by Ruben Amorim’s Sporting Lisbon in a 2-0 home win over the London club. Amiron employed the same tactics, that ex-Chelsea manager Thomas Tuchel, used over Conte’s Spurs earlier this season, and has been in the headlines for it. Sporting put out an exceptional performance, scoring two amazing stoppage-time goals that left the entire Spurs defence watching.

Spurs have managed a very decent start to the season so far, when it comes to the points tally in the Premier League. However, they haven’t looked lively at all. They have done some hefty business in the transfer market as a precursor to the new season. They have signed some exciting players like Richarlison, Ivan Perisic, Clement Lenglet, Djed Spence and Yves Bissouma. These are some players that the manager found suitable for his style of play. However, most of these players have either not gotten an opportunity or have failed to make a big impact.

Spurs are currently sitting at a quite comfortable spot in the Premier League table. But, that doesn’t do justice to showcase how bad they have actually been playing. Let’s discuss Tottenham Hotspur this season, their weak areas, their statistics, which players need to step up and what Antonio Conte should do.

🎙 "We have to continue to work, to have a good reflection on the game, to take the positives and improve the negatives"

How bad have Spurs been this season?

Even though they have gotten the results, Spurs look like a completely different team from last season. They lack excitement, unpredictability and chemistry. They look down in confidence, playing slow football. They have managed to score goals, however, that just depends on chance and good individual positioning of players. They don’t know how to function as a unit and play together as a team.

A lack of system just shows why many important players haven’t been playing to their very best. Players like Son who are giving one bad performance after the other are still keeping their place in the starting line-up. The defenders are caught sleeping by the opposition time and again. There is confusion all around the squad, there are debates about who should start and who should not. Antonio Conte has many decisions to make to get the most out of his players.

This season in the Premier League, Spurs have had an incredible home form, winning all three games they have played at the Tottenham Hotspur Stadium so far. On the road so far, however, they have drawn twice and won once.

Spurs have been quite inconsistent when it comes to scoring goals. They heavily depend on individuals for goals and it is mostly a matter of the player being at the right place at the right time. Over this time period, they have produced an xG of 1.71 per match while conceding an xG of 1.52 per match. They have scored 2.0 goals per 90 and conceded 0.83 goals per 90. This means they have almost conceded a goal for every two goals they have scored so far. This just goes to show how poor Spurs have been defensively.

They are a team that isn’t afraid of taking shots, but that becomes of no use when the system in which the team is playing fails to work. They have taken an average of 15.67  shots per game with a disappointing 13% shot conversion rate every game.

Spurs have managed to maintain an average of 50% possession every match, but not being able to do much with the ball is the problem. This rate won’t improve unless Antonio Conte can figure out a better system for the side where he can maximise the potential of his very best players.

Spurs are in need of big players to step up

Harry Kane has been Spurs’ best player so far this season, scoring 5 goals in 6 games in the Premier League. He has an impressive 4.4 xG (3.6 npxG) and 1.2 xA. Over this period of time, he has also produced 23 Shot-Creating Actions (SCA). Kane has scored almost half of the goals the entire team has scored this season. Spurs have relied on his individual brilliance, positioning and finishing this season.

Son Heung-Min, on the other hand, hasn’t been up to his standards this season. The South Korean won the Premier League Golden Boot for the first time in his career along with Mo Salah last season. In this campaign so far, Son has just assisted once and is yet to net his first Premier League goal. He has produced an xG of 1.9 and xA of 1.1 so far, along with 20 SCA and 3 GCA (Goal-Creating Actions). These are very unimpressive numbers from the Korean and Conte needs to figure out something quickly which can get the scarlet off to the mark in the Premier League.

Ivan Perisic joined Spurs just this window. There are still questions about his fitness, however, he is a brilliant player. He plays as a wing-back on the left for Conte’s side. When fit and starting, he can offer a major threat to the opposition. His runs, overlaps, exquisite crossing ability and ball control are like no other. The Croatian has played much forward throughout his career and has also got a deadly shot in him, as we have seen in the 2018 World Cup. He is truly underrated and his numbers are great. He has assisted twice from just 1.4 xA and also created 10 SCA and 2 GCA respectively. He offers a major threat when going forward, we can only hope he starts more matches and shows his true potential at Spurs.

An analysis of the player adored by the Inter Milan staff and epitomizes the quote "ages like fine wine".

Spurs signed Swede Dejan Kulusevski from Juventus in the beginning of 2022. He has proved nothing short of an absolute gem. His dribbling, ball control and shooting is brilliant. He didn’t take much time to settle in and bagged 5 goals with 8 assists in just 18 appearances for them last season. This season, he has failed to find a rhythm, but he is a very talented and unpredictable player, and will find his way to goals.

Antonio Conte has to make many important decisions and he needs to make them fast. The Italian has struggled all his career in Europe. He has insisted in the past that he has the ambition to win silverware in Europe, even though his record in the UEFA Champions League and UEFA Europa League has been poor. His most successful attempt at this was his first time competing in Europe as a manager when he took Juventus to the quarter-finals in the 2012/13 season. He even reached the Round of 16 with Chelsea in the 2017/18 season.

Conte: "The Champions League level is high. You know that you have to reduce the mistakes because in the end you can pay. Tonight we paid a lot. Now we are talking about a loss, a loss against a team that showed they are used to playing this competition." https://t.co/GFwS9KrXAx

Tottenham hired Conte to help them qualify for the Champions League, which he did. His biggest objective now is to take them as far as possible in the competition.

Conte’s team this season has been dysfunctional and hasn’t been able to properly function as a unit. His tactics are being countered easily by opposing managers and he still continues to use them. The players look underwhelming and are not giving everything they have got. Conte is also very irregular with substitutes. He needs to find a fix and he needs to do it quickly. He needs to be strict and authoritative.

Conte plays a three-at-the-back formation which utilises the wing-backs and wingers to play together and find their target man, Harry Kane. The main problem is not with the instructions but the mentality. Conte has gotten results so far but with continuous underwhelming performances, it won’t work for long. He needs to trust his main players and has to be clever with his substitutions. He has to tell his players to be ruthless on the pitch. There are defensive problems and to avoid them he needs to change his structure at the back. He would need a set of midfielders to drop in deeper along with the central defenders and be aware at all times.

Tottenham haven’t had a bad start to the season on paper, but they can do much better. The fans expect more and they won’t settle for less. The fans are waiting for a change at the club and it must reflect good and exciting football on the pitch, only time will tell.