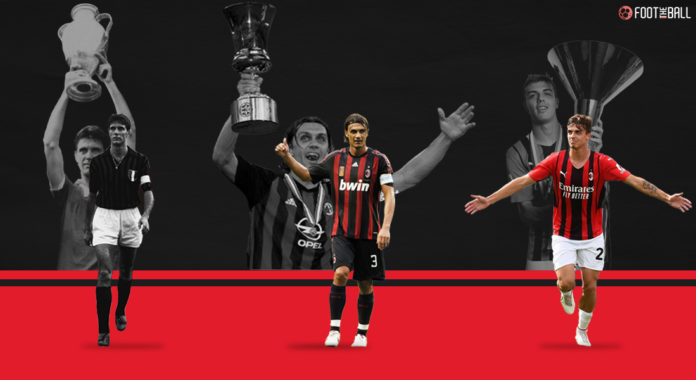 May 18, 1994, AC Milan defeat heavy favourites Barcelona 4-0 at Olympic Stadium, Athens, in a match that brought considerable changes to football tactics. These dates are not a representation of AC Milan’s historic triumphs but also have a uniqueness to them. All these victories had a player from the same family, Cesare Madlini, Paolo Maldini and Daniel Maldini.

In the world of football, where we have seen few successful father-son footballers, it is astonishing to see that three generations of a family are Seria A champions. Daniel Maldini, the son of Paolo and grandson of Cesare, has won the Scudetto in just his second season at AC Milan.

Daniel, like Paolo and Cesare, has spent his entire time at AC Milan and is all set to continue Maldini legacy at the San Siro.

Who is Daniel Maldini?

Daniel Maldini is a 20-year-old attacking midfielder who can play anywhere across the front line. He joined the club’s youth academy in 2010. And after being promoted through the various age teams. Daniel Maldini was also part of Milan’s under-16 team, which won the national championship by beating Lazio 5-2.

And from there, it took him less than three years to break into the senior side. On February 2, 2021, Daniel Maldini made his debut in a 1-1 draw against Hellas Verona.

1 – Daniel #Maldini is the first player born in the 2000’s to play a Serie A encounter with #ACMilan. Dinasty.#MilanVerona #SerieA pic.twitter.com/xx9ukUny2R

Daniel Maldini is 20 years old but has managed to find playing time at a title winning team. This shows the potential that he has. Due to his father, Paolo and grandfather, Cesare, he has garnered tremendous interest from the Milan faithful. As a result, his every move has been tracked.

However, unlike Paolo and Cesare Maldini, Daniel is not a defender but did start his career as one. However, his impeccable vision, ball control and dribbling skill meant he was deployed offensively.

And if he can keep up his performances, he can not only get more game time at Milan but will also be in the running for the 2023 under-23 World Cup with the national team.

But even in those limited minutes, he has shown that he deserves more game time.

Smarterscout rated him 69 for dribbling and 91 for link-up play. His shooting was rated as 80, and his aerial ability at 74, good enough for a player his age.

His dribble success rate is an impressive 66.7 per cent. He has created one chance and taken three shots in the current season.

Daniel Maldini is a typical attacking midfielder who relies on creative and intelligent passing to split open the opposition’s defence. He is a player who is quite comfortable with the ball at his feet, a trait even his father Paolo had. AC Milan has used him centrally, where his main job is to create space for his teammates to exploit.

Maldini also covers a lot of ground and is always ready to help the team defensively. His heatmap from Sofascore shows this, and being a son of Paolo and grandson of Cesare, we can assume he has natural defensive talent.

Just realising that Daniel Maldini has now emulated his father, Paolo, and grandfather, Cesare, in winning the Scudetto with Milan. Surely not many other examples of this in world football?

In case you missed it: The English football success story

Daniel Maldini has come into the picture at AC Milan at a very opportune moment. Though AC Milan has won the title, they did it with a 40-year-old Zlatan Ibrahimovic and several other aged players like Olivier Giroud. These players will leave at some point and will have to be replaced.

However, with so many positions to fill, the club will look to young players already there to fill some of these. This will be a substantial financial boost to the club.

And if Daniel Maldini does indeed manage to do, he will not only forward the legacy of his father and grandfather but will also form one of his own.