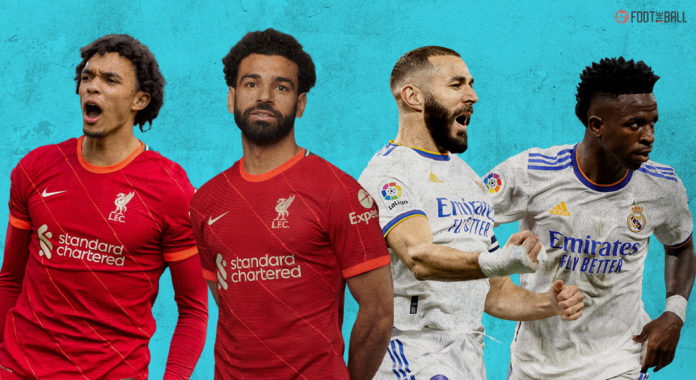 The 2022 UEFA Champions League final has thrown up two very familiar teams. Liverpool have won the competition six times while Real Madrid are the record-holders with 14. Moreover, it will be the third meeting of these sides at this stage. Liverpool won in 1981 (at Parc des Princes too!), while Los Blancos took home the prize in 2018. Who comes out on top in 2022?

Only a few days remain to find out the answer. Liverpool and Real Madrid are arguably two of the strongest clubs in the world. The Reds have already won the Carabao and FA Cups and finished just a point behind Manchester City in the Premier League race.

Meanwhile, Madrid were crowned champions of Spain for a record 35th time, though they may have gotten lucky as well. Nevertheless, the paths to the final have been wildly different for each side.

𝙁𝙄𝙑𝙀 consecutive wins on the road in the #UCL this season 🛣 pic.twitter.com/ksxzOSMkxE

Liverpool cruised to the final, while Madrid had to sweat in every encounter. Given the line of superstars each side possesses, it is no surprise that they are competing for the biggest prize. But who cuts the ultimate combined XI between Liverpool and Real Madrid? FootTheBall presents the super team made up of players from each club.

Possibly the hardest choice in the whole lineup. Thibaut Courtois is a fantastic goalkeeper, with a 50% saving capacity from penalties and a 41.7% clean sheet record. However, Alisson has been a class above for Liverpool since his joining.

Allison and Ederson are two of the foremost goalkeepers for club and country.

Alisson is coming on the back of a superb 2021-22. 20 clean sheets and a 75.3% saving in the league, having conceded just 0.67 goals per 90. Moreover, Alisson is also an expert in one-on-one situations and able to stifle the danger.

His refined passing and ability to launch attacks is also a bonus for Liverpool, something that Courtois is improving.

There really can be no comparison. Alexander-Arnold is the deadliest fullback in the world offensively. Moreover, his passing, vision, and mastery over set pieces are unmatched. Alexander-Arnold has developed into one of the key facilitators of attacks for Liverpool. He runs up and down the flank all match, including coming inside whenever possible.

Similarly, he tracks back defensively and can cover the danger from midfield as well. Alexander-Arnold had two goals and 12 assists in the league, just one behind league leader Mo Salah.

One of the twin towers in Liverpool’s backline, Van Dijk has been almost insurmountable for attackers. It is no surprise that he wins 4.12 aerials per 90. Moreover, Van Dijk’s passing accuracy is 91%, attempting 75 passes per 90. These numbers just prove how important Van Dijk is in building up attacks from the back.

Jurgen Klopp knows the importance of Van Dijk in the lineup, and he can also be a nuisance offensively. Madrid’s attackers will find an entirely different player from the 2018 version. Van Dijk will also have his hands full in dealing with Madrid’s attackers.

The Brazilian defender has been a solid addition for Los Blancos. Militao’s speed, versatility, and tackling sense has been a boon for Madrid after losing Raphael Varane and Sergio Ramos. He completes 0.36 dribbles per 90 and puts in 2.04 tackles. Militao is much more mobile and agile than Joel Matip.

Moreover, he can carry the ball up the field quickly. However, Carlo Ancelotti will rely heavily on Militao to stop the influx of Liverpool’s attacks. Militao has come of age very well in recent seasons and could take the final step in his evolution in the final.

The Scottish international is the perfect compliment for Trent Alexander-Arnold. Robertson is equally adept in delivering crosses and getting into dangerous positions. He has three goals and 10 assists, with 6.71 progressive passes and 7.21 progressive carries per 90. Moreover, Robertson is also very astute defensively and is a beast while tracking back.

Fun day out at Wembley, WHAT A TEAM! Enjoy your night Reds ❤️ #YNWA pic.twitter.com/3nf8iiOrGJ

That gives Liverpool multiple options down their two sides. While Alexander-Arnold can come inside and stay forward, Robertson will be there to cover the threat. Additionally, he is also adept in set-pieces, and scores some exquisite goals from time-to-time.

Another incredibly tough call. Fabinho has been excellent for Liverpool, with his tackles and reading of the game alongside a penchant for scoring. However, Casemiro is the foremost practitioner in his position and is a menace of opposing attackers. He is not afraid to dive into tackles, stand up to strikers, and get into a proper scrap.

Casemiro says he does not have any extra motivation after Mo Salah talked up revenge in the Champions League final https://t.co/jldSNlsXCY

Casemiro is a one-man wal for Madrid’s backline, with 2.20 blocks, 2.63 clearances, and 3.29 aerials won per 90 in 2021-22. Liverpool will have to get very creative if they are to bypass Casemiro in an effective manner.

The former Bayern Munich midfielder is a magician with the ball. Despite his uncertainty in featuring for the final, Thiago is a starter any day. Liverpool have been transformed into a more offensive, controlled beast under Thiago. Moreover, he can spray passes all across the pitch, and has a good eye for goal.

Therefore, it is no surprise that he attempts 85.54 passes per 90, putting him in the 98th percentile.

Moreover, his attacking mindset is also evident through 9.62 progressive passes and 8.48 progressive carries per 90. Thiago can also tackle efficiently, with 3.37 per 90, good for the 94th percentile. A gamechanger whenever on the field.

The ageless veteran has showed no signs of slowing down. Modric pulled off the pass of the season against Chelsea with a trivela for Rodrygo’s goal. Modric’s tenacity, hard work, and gritty nature have been vital for his longevity. Ancelotti has favoured the Croatian over the likes of the younger Fede Valverde or Eduardo Camavinga.

Modric has repaid the faith many times over, with two goals and eight assists in 2021-22. He has averaged 6.80 progressive passes and 6.86 progressive carries per 90, both in the high-90th percentiles. Does the 2018 Ballon d’Or winner have another final winning performance left in him? The answer will be positive mostly.

The explosiveness of Vinicius Jr. has been a joy to behold. The fleet-footed winger has built a formidable partnership with Karim Benzema. 17 goals and 10 assists in La Liga constitute his best season in professional football. Vincius Jr. is an extremely wily customer, whose pace and trickery bamboozles defenders.

Benzema and Vinicius Jr. have been involved in 100 goals combined this season 🤯 pic.twitter.com/J9IeTaTrir

A Ballon d’Or winning season on the cards? Quite likely, if Real Madrid beat Liverpool. 50+ goal contributions across all competitions and single-handedly keeping his side alive in the Champions League. Benzema hit consecutive hat-tricks against PSG and Chelsea to dig Madrid out of a big hole. Similarly, he was also on fire against Manchester City, converting the game-winning penalty with a Panenka.

Benzema has been problematic for oppositions ever since the season started with his all-round game. Like Vinicius Jr., his stats are also mind-boggling. 4.19 shot-creating actions (95th percentile), 4.77 progressive passes (99th percentile), and 6.44 progressive carries (96th percentile) per 90. Virgil van Dijk and co. are in for a real test.

22 goals and 13 assists in the Premier League to win both the Golden Boot (shared) and Playmaker of the Season awards. Mo Salah had a stupendous campaign, even by his standards. Additionally, he was unplayable down the right, with defences looking beat already.

Salah has the ability to finish from anywhere. His trickery and quick feet leaving defences on the mat. Moreover, Real Madrid have certainly not faced an opponent of this nature in La Liga so far. Ferland Mendy will have to be really careful of his belongings in order to match up with Salah in full flow.