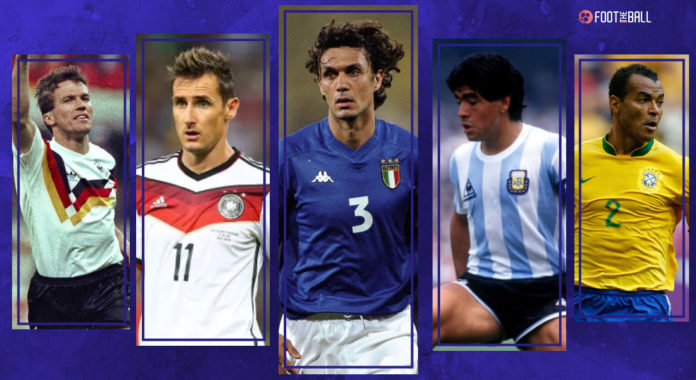 Being a footballer at the highest level may seem like an easy job, however, it is as intense as it gets. It is 90 minutes of continuous action. It is pressurising, one wrong pass and the crowd can get on you. The opposition fans trying to bring you down. It is extremely difficult to handle and block out all that noise, which comes with a lot of experience.

The FIFA World Cup is as big as it gets. It is the liveliest football environment one can ever find, or if you are a footballer, the most difficult. When it comes to the world stage, it gets personal. A bunch of nations are fighting to win and bring home the greatest title in world football. This is something not every footballer can do.

The FIFA World Cup takes place this year in Qatar. Let’s take a look at the top footballers with the most World Cup appearances.

Lothar Matthaus tops this list, which isn’t surprising at all considering how good Germany have been in the World Cup throughout the years. Matthaus is one of the greatest German players ever. The versatile midfielder could play as an attacking or defensive player as well.

He featured as the central box-to-box midfielder because of his stamina, passing, and technical abilities. Matthaus racked up 150 caps for Germany and 25 appearances at the World Cup as well. He appeared in five different World Cup editions. He captained his side to victory in 1990 and also won the Ballon d’Or in the same year.

Another German on the list, Klose is the all-time leading goalscorer at the FIFA World Cup for Germany. He is one of few players to have won the bronze, silver and gold medals at the World Cup. Klose made 137 appearances for Germany and is loved for having been a prolific striker.

The attacker made an instant impact on his debut at the 2002 World Cup as he scored five goals and repeated this feat at the 2006 edition, winning the Golden Boot. The German striker then scored four goals at the 2010 tournament and twice at his last World Cup in 2014.

Maldini is regarded as one of the best defenders of all time. He racked up 126 caps over the 16 years he played for Italy, having made 23 appearances for his country at the World Cup. Maldini holds the record for most minutes played at a World Cup (2216 minutes). The Italian made an instant impact at his first World Cup in 1990, playing all seven matches. He was at the heart of the defence which kept a clean sheet in five consecutive matches.

Captaining 🇮🇹️ @azzurri for eight years, the defender took part in four FIFA World Cups, reaching the final in 1994 and the semi-final in 1990. pic.twitter.com/Emem3kicGu

The former Argentina player is regarded as one of the best to ever grace the game, alongside Pele, Messi and Ronaldo. Maradona was an excellent playmaker with exemplary skills and vision.

He made 91 appearances for Argentina, scoring 34 goals. He also has 21 appearances at the FIFA World Cup. The Argentinian also featured at four World Cups as well. He shone at the 1986 World Cup, where Argentina beat West Germany in the final. Diego scored two goals against the Three Lions to seal the victory. The first goal, more often remembered as the “Hand of God,” was a handling foul that was not given by the referee. The second goal was iconic because Maradona went solo, dribbling past five England players and scored.

🇦🇷 Diego Maradona is the only man to register 5 goals and 5 assists in one #WorldCup. He drew a record 53 fouls and scored ‘The Goal of the Century’ in it. He captained @Argentina to glory. Has any individual ever had a better World Cup? ♾

Wladyslaw Zmuda was a Poland legend. The defender has 91 caps for Poland, during which he scored two goals and appeared at four World Cups. He made 21 appearances at the World Cup and is at par and even above many renowned legends. The defender was named the Young Player of the Tournament at the 1974 World Cup as well.

Cafu is one of the best right-backs of all time. The full-back is Brazil’s most capped player of. He made 142 appearances for the national team and featured at four World Cups. Cafu also made 20 appearances at the World Cup. However, he holds a unique record to his name. The Brazilian is the only player in history to make an appearance in three consecutive World Cup finals. He won the World Cup in 1994 and 2002.

⏪ #OnThisDay in 1990 Cafu made his senior team debut for Brazil ☝️

Schweinsteiger is fourth on the list of Germany’s most-capped players of all time. He earned 124 caps for his nation, scoring 24 goals. Schweinsteiger also made 20 appearances at the World Cup just like Lahm. He has also played at the three World Cups (2006, 2010, 2014). He was an excellent midfielder and very versatile as well. The German played as a holding, box-to-box midfielder, playmaker and also at times in a deep-lying role. Schweinsteiger’s main contribution was at the 2014 World Cup, where he played a very vital role in the final against Argentina. He successfully defended against Lionel Messi, after which his side won the tournament.

A special day with special memories for me! pic.twitter.com/sLI6g9gXWL

Lahm is one of the best full-backs of all time. The German defender succeeded at both the domestic and international levels. He played with discipline and never received a red card in his career. Lahm is one of the most legendary German players and one of their best captains as well.

He made 113 appearances for Germany and played at the 2006, 2010 and 2014 World Cups. He made 20 appearances at the FIFA World Cup for the German side. Lahm was the only player to play every minute at the 2010 World Cup. He retired from International football after Germany won the World Cup in 2014.

'Look what I won!'#GER skipper Philipp Lahm holds the World Cup trophy after landing in Berlin (via @DFB_Team_EN) pic.twitter.com/EQ4UQn9G59

Grzegorz Lato played for the Polish team between 1971-1984. It is during this time that he made 100 appearances, in which he scored 45 goals. The winger was a part of the golden generation of the Polish football team in the 1970s. The Polish team won the gold medal at the summer Olympics in 1972.

The peak of his career was at the 1974 World Cup when he was the top scorer in the tournament. The winger was also part of the Polish team which finished third at the 1984 World Cup in Spain.