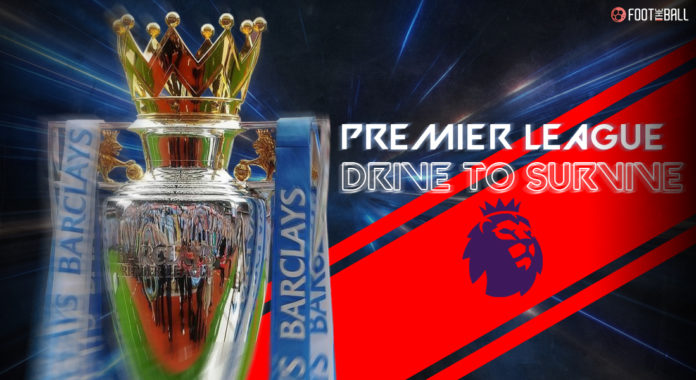 ‘Formula 1: Drive To Survive’ has proven to be incredibly popular on Netflix with four seasons released so far. The series looks at each Formula 1 season, covering the twists and turns by focusing on the various teams and drivers throughout the campaign.

The Premier League has been approached regarding a footballing version of Netflix’s hit Formula 1 series Drive to Survive. According to multiple reports, Box To Box productions have also been in talks with several top-flight clubs regarding the proposal to film a behind-the-scenes documentary. Premier League clubs were informed about the approach and talks are now set to take place, with Netflix set to try and emulate the success of the motor racing series.

F1 has seen a massive boom in popularity since the series began to air on Netflix in 2019. It gave viewers an insight into an otherwise exclusive world where drivers’ personalities only shone through in press conferences and on track.

It shows fans never-before-seen footage of the races and drivers within the sport, with the current season set to be their fifth edition of the series. Netflix have previously documented on football, having followed Sunderland from 2017 to 2019 in their hit series ‘Sunderland ‘Til I Die’. However, the streaming service has faced competition in recent years for such documentaries, with Amazon Prime venturing into the genre. They have created an ‘All or Nothing’ series, which has so far covered the likes of All or Nothing: Arsenal, Manchester City, Tottenham Hotspur and Juventus.

With the catch of all 20 Premier League clubs to be featured together, along with the tag of the best league in the world, Netflix are surely trying to wrestle their way back into the game. With that in mind, FootTheBall has got football fans covered with all details on the most anticipated documentary of the century.

What is Premier League ‘Drive to Survive’?

Production company and British-based Box To Box Films want to do a Premier League version of ‘Formula 1: Drive To Survive’. Box To Box Films have also made the boxing series ‘The Kings’ as well as Make Us Dream – a documentary about Steven Gerrard.

They’ve already been in contact with Premier League clubs regarding their plans. There are still plenty of details that need to be ironed out. Such as how much access clubs will need to provide behind the scenes as well as the rights to show highlights. A decision will then be made by the 20 clubs. The Premier League and the production company have both so far declined to comment.

More talks are now set to take place regarding a potential project with the hope it could achieve the same success as their F1 series. The company’s biggest success has come with Drive to Survive, which is now in its fourth season on Netflix. The series recently charted the 2021 epic title battle between Lewis Hamilton and Max Verstappen, but before season four’s 2022 release viewership in F1 has sky-rocketed. The sport saw a 40 per cent increase in its US television viewership between 2021 and 2022, while seven of the 10 most watched races in American history came during 2021.

This included the Silverstone Grand Prix – where the attendance record was again broken this year as 142,000 attended race day – and the season finale in Abu Dhabi which saw a whopping 108.7 million viewers tune in. In a potential collaboration between the Premier League and Box To Box, it is hoped a similar impact can be felt.

Where were you at 15? Sitting on your couch and playing FIFA? 😜#AFC #Arsenal pic.twitter.com/ynhavLA4JF

Will all 20 clubs be shown on the Premier League Netflix series?

Once the details are confirmed about the scope of the series, including how much access clubs will need to provide behind the scenes and rights to highlights, a decision will then be taken by the 20 clubs to affirm or reject the deal.

A number of football clubs have already delved into behind-the-scenes documentaries, with Cristiano Ronaldo and Lionel Messi featuring in Argentina: All or Nothing and Juventus: All or Nothing series. Elsewhere, National League side Wrexham have been the subject of Welcome to Wrexham on Disney+, with new Hollywood owners Ryan Reynolds and Rob McElhenney charting their takeover of the club. Netflix themselves recently dived into the untold story of the transfer saga of Luis Figo from Barcelona to Real Madrid through The Figo Affair.

Football fans around the world would no doubt love access to a league where merely getting a match ticket can be extremely difficult. Whether the 20 clubs or the league itself will agree to allow cameras and fans behind the curtain remains to be seen.

Netflix, who announced a net loss of 200,000 subscribers in April 2022, want a slice of the Premier League pie. An increase in global attention on the league will in turn drive up value of international TV rights – which is viewed as having the biggest growth potential for the English top flight.

Of course, the Premier League is a far larger market than F1 and it is already close to bursting in a domestic sense. Consequently, league chiefs have turned their attention internationally, which is viewed as having the biggest growth potential for the English top flight.