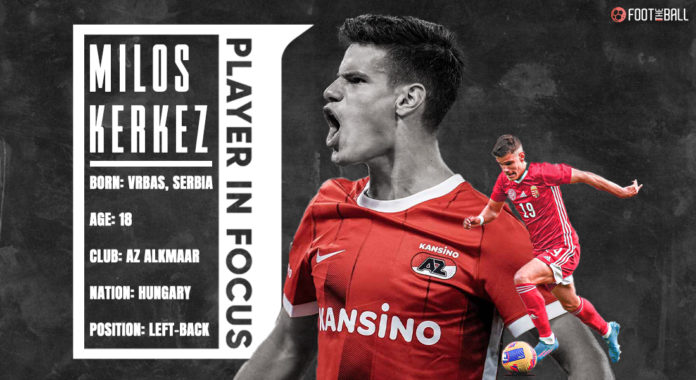 However, this is not the first time the league has been the victim of big clubs poaching their top talent. The league has constantly developed new stars to replace the old ones, and the cycle continues. Milos Kerkez is a perfect example of this trend. AZ Alkmaar signed the full-back from AC Milan for a € 2 million fee. And within a handful of games, the Hungarian has proved that it was money well spent.

The 18-year-old is why AZ Alkmaar are currently third in the league, one point behind leaders PSV and Ajax.

So, who’s Milos Kerkez, and how good is he?

How good is Milos Kerkez?

Milos Kerkez started his youth career at the Austrian club, Rapid Wien. He would spend five years at the club before joining Hodmezovasarhelyi, a Hungarian club. However, he left the club within a year to join Gyori FC. Here, he made his senior debut in a 2-0 loss against Dorogi FC.

Milos Kerkez and Attila Szalai are both in the top 10 most sought out players in TransferMarkt 👀🇭🇺 pic.twitter.com/TCHCSacMIb

However, Kerkez was desperate for senior-team football. So, when AZ Alkmaar came calling, the teenager had his mindset. Like AC Milan, he was sent to the youth side, where he made nine appearances. And his performances have been rewarded with Milos Kukrez appearing in all seven matches, scoring a goal as well with AZ Alkmaar senior side.

Throughout this time, he has shown his brilliant talent, which has earned him a senior cap for Hungary. He was named in the squad for four matches and made his debut against Germany. Milos Kerkez has been a perfect attacking full-back for Pascal Jansen. Under him, the team plays in a system that encourages attackers to widen the field. This requires the full-backs to create overlords on the wings in which Milos Kerkez is an expert.

In just seven matches in Eredivisie, Milos Kerkez has proven himself to be one of the best young players. While he has scored a goal in the league, it is the continental tournaments where he has shone the brightest.

He made six appearances in the three UEFA Conference League qualifiers, providing three assists. His performances have not even dropped in the Conference League. In Alkmaar’s second match against FC Vaduz, Kerkez provided two assists helping his team win 4-1.

His stats have been impressive, to say the least. According to Soccerment, Milos Kerkez has made the third-most successful crosses in Eredivisie. The youngster has also been an offensive beast. According to the Expected Offensive Value Added (xOVA) metric, Kerkez has been the second-best offensive threat in the league, counting only defenders.

💰transfer to Alkmaar for 2M€

⚽️first goal in the Eredivise in August

What a year for him! 🫡 pic.twitter.com/f4k0XNQWGO

He is also the sixth-most chance-creating defender in the league, while he ranks eight regarding successful dribbles. His passing accuracy is also an impressive 81 per cent. He also wins over half of his duels and complex 70 per cent of his dribbles.

Milos Kerkez is as modern as a full-back can get. His heatmap from Sofascore shows that he spends most of his time on the wings in the areas between the half and attacking a third of the pitch. Kerkez is also very fast and agile, which allows him to make quick movements around the opposition’s defence.

He is also an efficient dribbler and an adept passer. In addition, Kerkez has also shown that he can perform against the big teams as well. Before his debut against Germany, Kerkez said, “If I can stop Gnabry or Sané in one vs one and hold myself well, then I know I can get to that level.” And Kerkez did not deter from the challenge and performed so brilliantly that Serge Gnabry had to be subbed off at half-time.

📲 | Milos Kerkez is once again in Eredevise Team of the week 🔥

His performance has also been brilliant in Eredivisie, which is why he has been selected multiple times for the Team of the Season. However, one of his most underrated abilities is his mental strength which has been a crucial reason for his rapid development.

While AZ Alkmaar might have purchased him recently, his performances will definitely have other clubs interested. Even this season, players such as Martinez and Malacia changed clubs and have started to perform straightaway at Manchester United.

And Liverpool are considered to be the front-runner for the left-back. Although they have Andy Robertson and an able deputy in Kostas Tsimikas, they are already planning for the future. Robertson is already 28, and thus Liverpool will be looking for a capable replacement when the time comes to replace the Scotsmen.

However, Kerkez is still young and will need to deliver consistent performances for a season or two before he could be seen as a top-tier player. Thankfully, he has the best environment to do that.