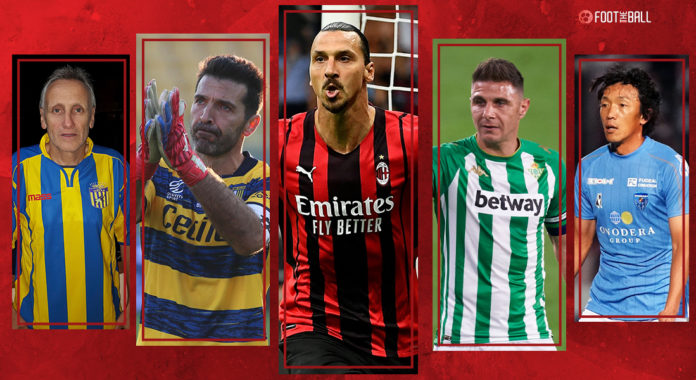 The older, the wiser. With the sudden burst of young talents coming our way who will keep us entertained for the times to come, the question arrives if football is a young man’s game. Young talents are getting into the limelight so much recently, that fans forget about players who have given their entire careers to this sport.

There are active footballers who have been consistently performing well every season and have been incredible servants to their club and country. Something like this is not very easy to achieve and comes with the utmost dedication and experience.

Let us take a look at the top 10 oldest active footballers in 2022.

Robert Carmona is the oldest active player in football right now. He was confirmed by the Guinness World Records as the oldest footballer in the world in 2022. He’s still playing official matches for his club Hacele Un Gol A La Vida, in the fourth tier of Uruguayan football. The Uruguayan footballer has had a career that has spanned 45 years, playing as a centre-back.

Kazuyoshi is a Japanese professional footballer who holds the record of the oldest goalscorer when he scored a goal in the J-League in 2017 at the age of 50. The former Japanese international played 89 times for the national team between 1990-2000 scoring an unbelievable 55 goals during his playing days with the Blue Samurais. He has had a long and storied career playing for various clubs in different countries. The forward has featured for clubs like Santos, Palmeiras, Genoa, and Dynamo Zagreb. He currently plays as a forward for Japan Football League club Suzuka Point Getters on loan from Yokohama FC.

He was making his debut for Suzuka Point Getters in front of a sell-out crowd in the Japanese fourth division. 🇯🇵

Age is just a number! 💪 pic.twitter.com/3y4gbBfBCI

The Italian legend is one of the greatest goalkeepers of all time. Buffon is also currently one of the oldest active footballers on the planet. The 44-year-old is one of the most beloved and respected players in world football. His exploits with his former team, Italian side Juventus FC cemented his reputation as one of the best shot-stoppers ever in the country. Gianluigi is also a World Cup winner with Italy following his heroic exploits at the 2006 World Cup in Germany. The big man from Carrara in Italy is still going strong as he captains and plays as a goalkeeper for Serie B club Parma.

Gigi Buffon will be 46 by then. “I can give my best, again and again” – he said. @1913parmacalcio pic.twitter.com/LIWHmJp48l

The former Celtic FC midfielder is another Japanese player who is still actively involved on the pitch in spite of his age. The 43-year-old Yokohama FC player is currently in his fourth season with the J2-League outfit. He featured 10 times for them in the J-league last campaign. Nakamura also played for the Japanese national team 98 times between 2000-2010. He is one of the best foreign players to have played in Scotland, as he was a key figure for Celtic.

The tough-tackling Portuguese defender began his career with FC Porto in 1999 and has been actively playing football ever since. Although he spent most of his professional career at Porto, where he won a total of nine titles, he also played in Russia with Zenit Saint Petersburg, in Italy with Cagliari and Parma, and also in Turkey with Fenerbahçe. Bruno Alves also won the UEFA European Championship with Portugal in 2016. In 2022, he currently plays as a centre-back for Greek Super League club Apollon Smyrnis.

The veteran Spanish footballer currently plays at the top level for Granada in the Spanish La Liga. At the age of 40, Molina is one of the oldest footballers currently playing in 2022. Molina was a late bloomer and began his professional career at 25. He played for a lot of Spanish clubs but represented mainly Betis during his career.

The former Spanish international, who just turned 40 some weeks ago, is the oldest player still active in the Spanish La Liga. The Real Betis legend has made about 551 appearances in the top Spanish division, breaking the record for the most appearances made by an outfield player previously held by Real Madrid icon Raul Gonzalez. He recently became the oldest goalscorer in European football history.

The former Manchester City and Paraguay striker Santa Cruz is still going strong. Despite recently turning 40 years old, the for Olimpia Asuncion forward is as sharp as ever. The all-time top scorer for the Paraguayan national team currently plays as a striker for the Paraguayan club Club Libertad.

Diego spent most of his career in Spain, playing for Real Madrid, Villareal, Sevilla, and Espanyol. However, he also represented AC Milan in Italy. The Spanish goalkeeper is currently a first-team player for newly promoted La Liga side Espanyol, in the 2021/22 season. Diego Lopez is still going strong and is showing no signs of slowing down.

Zlatan Ibrahimović, set to sign a new contract with AC Milan in the next days. New deal will be valid until June 2023, salary around €1/1.5m net guaranteed plus add ons depending on his performances. 🔴🇸🇪 #ACMilan

He will turn 41 in October – never ending Zlatan. pic.twitter.com/hqyEoJLH88

The Swedish football legend has shown no signs of ageing as he currently plays as a striker for Serie A club AC Milan and the Sweden national team. Ibrahimovic is undoubtedly one of the greatest strikers of all time and one of the most decorated active footballers in the world. He has scored over 500 career goals for both club and country.