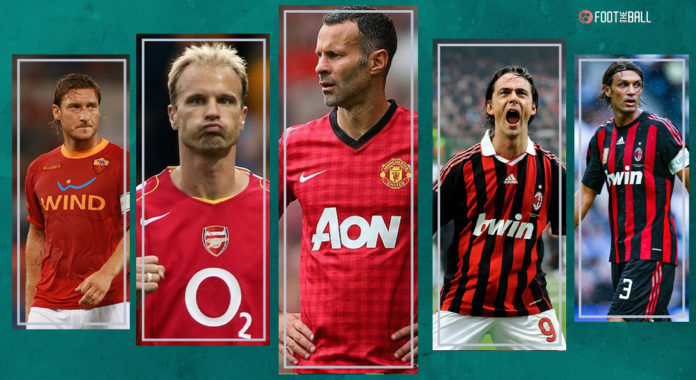 From Lionel Messi’s stunning header against Manchester United to Ronaldo’s incredible overhead kick against Juventus, we have witnessed some magical moments throughout the years. Titles like UEFA Champions League and UEFA Europa League are the most prestigious titles in European club football. It has been there since the year 1956 and clubs compete in their respective leagues to qualify for Europe.

We have witnessed people of all kinds of ages compete, young and old, rookies and veterans, professionals and winners. Some players have broken records for scoring goals, at the age where many players have already hung up their boots. FootTheBall takes you through the oldest goalscorers in European competitions.

Real Betis veteran Joaquin marked his name in Europa League history after becoming the oldest scorer in the competition with a first-half strike against Ludogorets.

That strike made Joaquin, aged 41 years and 56 days old, the oldest player to score in the Europa League, surpassing Molde’s Daniel Hestad after his goal against Celtic in November 2015.

At 41 years and 56 days, Joaquín becomes the oldest goalscorer in competition history.

Totti spent his entire playing career at Roma, and won numerous awards. Despite interest from a number of major clubs, his love for Roma never wavered, spending an incredible 22 seasons at the club.

His most crucial match came when he scored in a 1-1 draw against Manchester City, becoming the tournament’s oldest player, a record that is yet to be broken. He was 38 years and three days old.

Manchester United have produced many great legends, and Ryan Giggs is undoubtedly one of them. He is also the player with the most appearances for the Red Devils.

During 2011-12 Champions League, Giggs set another milestone in his United career when he scored against Benfica, making him the competition’s oldest goalscorer then. He was 37 years and 289 days old.

ANSWER: Francesco Totti became the oldest goalscorer in #UCL history with this goal in 2014 – surpassing record set by Ryan Giggs in 2011. https://t.co/rNx3cIh8nn pic.twitter.com/95xvjeGFgQ

One of the most adored and cherished players in AC Milan history. Inzaghi’s life at San Siro was full of goals and trophies, but his most unique goal came in their Champions League knockout match against Real Madrid.

The match ended in a 2-2 draw, with Inzaghi scoring both goals. That made him one of the oldest players to score in the UCL at 37 years and 86 days.

36 & 270 – Cristiano Ronaldo (36 years and 270 days) is the second oldest player to have scored a Champions League brace, after Filippo Inzaghi (37yy 86dd) against Real Madrid in November 2010. Immortal.#UCL #AtalantaManchesterUnited

The Inter Milan icon became the only player whose jersey was retired by The Nerazzurri after Zanetti made over 1000 appearances for Inter and won many trophies.

He achieved another milestone with Inter when he scored a goal in a 4-3 defeat against Tottenham at San Siro. He became one of the oldest players to score a goal in the Champions League at the age of 37 years and 71 days.

Laurent Blanc had a remarkable career as a player and manager. He was once Manchester United’s key defender and scored many goals for the club in the Champions League.

The French defender played several Champions League matches. His moment came against Olympiakos in October 2002, when United won 3-2. Blanc scored, making him one of the oldest players in Champions League history. He was 36 years and 338 days old at that time.

AC Milan legend Paolo Maldini inspired the club to greatness and remained by their side through thick and thin. He appeared in many memorable Champions League finals, including the 2005 final.

Despite losing the Champions League final, Maldini contributed a goal with a powerful header in the match’s first minute to become their oldest scorer. He was 36 years and 333 days old at that time.

The invincible Arsenal side had one of the best Champions League runs when they reached the final of the competition in 2005-06. However, they came out of a tough group, in which they faced Swiss side, FC Thun.

As the game entered stoppage time, the Gunners stunned the Swiss club with a 92-minute winner from Dennis Bergkamp, and his goal saw him join the list of oldest players in the UCL. He was 36 years and 127 days old at the time.

Left touch
Right touch
Out of his feet
Goal

Bayern Leverkusen‘s player made his name at the club and was a proper cult hero. When Arsenal played Bayern Leverkusen in the Champions League in February 2002, Ulf Kirsten made the headlines, despite Arsenal having world-class players.

Arsenal had the game under control when Robert Pires put the Gunners ahead, but a red card to Ray Parlour saw Arsenal concede a goal in injury time, and it was no one else but Ulf Kirsten right on the scoresheet. Kirsten’s equalizer came at the age of 36 years and 127 days.

Ulf Kirsten was born in East Germany when the nation was still divided and he was one of the first players to start playing football in the western part of the nation after reunification. #TBT #LegendsAreMadeInLeverkusen pic.twitter.com/7ppwkJ0YDY

Galatasaray have produced several greats of the game, and Gheorghe Hagi is one of the best examples. He spent five years at the club.

He was a dominating presence in Galatasaray’s midfield, and his place was irreplaceable in the team. During his last year at the club in 2000-01, Hagi became their oldest player to score a goal in the Champions League in their 2-0 win over Milan. He was aged 36 years and 30 days.