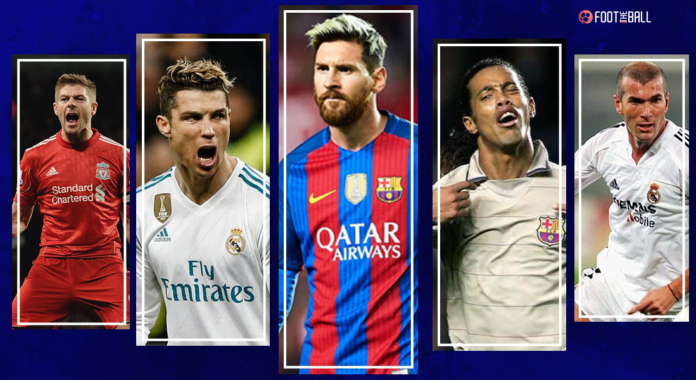 This goal represents the DNA of Barcelona and offers a glimpse of why tiki-taka was so successful in Barcelona. In the 2001 Champions League, Barcelona faced Liverpool in the group stages at Anfield. Carles Rexach’s men came off with a famous 3-1 win against the Reds.

However, it was the final goal of the night that was the best. First, Barcelona won a throw-in from which they generated a play of almost 30 passes. Then, using fast one-touch passes, the team ran rings around Liverpool. Xavi finally made the killer pass that put Marc Overmars through on goal, and the Dutch winger made no mistake as he put the ball past Jerzy Dudek.

It was a fitting goal for one of Barcelona’s best away performances in the Champions League.

This was not just one of the four goals that AC Milan scored that night; it was also the day the Italians ended the reign of Total Football. In 1994, AC Milan faced Barcelona for the Champions League title. And almost no one had any hopes that Milan could win against a side that had won four consecutive La Liga and a Champions League title just two years back.

However, Milan produced one of the best displays in Champions League history to tear the Barcelona team to shreds. And the third goal of the night was the best of the lot. Dejan Savicevic, who was given a free role in the attack, executed the perfect high press to rob Miguel Nadal on the right edge of the penalty box.

From the tightest of angles, the Montenegrin produced the perfect lob to put the ball past goalkeeper Andoni Zubizarreta.

In 1995, George Weah became the first African to win the Ballon d’Or. This came after a brilliant season with AC Milan. However, his talent was for all to see even a year ago at Paris Saint Germain when he scored one of the best goals ever against Bayern Munich. PSG were playing Bayern at the Olympiastadion in Munich, having already won the home leg 2-1.

Weah, in his prime form, received the ball near the 40-yard line. He then played a neat one-two with Pascal Nouma before using his quick feet to glide past three defenders and unleashing a ferocious shot that went past the hapless Oliver Kahn into the top left corner.

PSG and Bayern would qualify and reach the semifinals before benign knocked out by AC Milan and Ajax, respectively.

In the 2010-11 UEFA Champions League, defending champions Inter Milan faced FC Schalke 04 in the quarter-final. The Italians had already defeated another German side in Bayern Munich in the previous round. And they started the match perfectly against Schalke with one of the best UCL goals in history.

The game was only 25 seconds old when Esteban Cambiasso conjured up the perfect through ball to put Diego Milito on goal. However, sweeper keeper Manuel Neuer rushed out of the goal to head the ball all the way to the centre-line. And it was there that Dejan Stankovic struck the sweetest of a volley to score an outrageous goal.

While Schalke would go on to win the match 5-2, Stankovic’s goal has etched its palace in history and our top ten goals in Champions League history list.

Ronaldinho (Barcelona) vs Chelsea 2004-05 Champions League Round of 16

Ronaldinho made his career on skills and outrageous goals. And one of his best goals came against Jose Mourinho’s Chelsea. The team were trailing Chelsea by two goals on aggregate after scoring three goals within 19 minutes. However, Ronaldinho would score a penalty before scoring perhaps his most significant goal.

The Brazilian received the ball on the edge of the box and was immediately surrounded by John Terry and Ricardo Carvalho. Ronaldinho would then dazzle the defenders with his skills before producing a stunning toe-poke to put the ball past Petr Cech. It was a goal of the utter class, with Ronaldinho generating an outrageous amount of power with just a standing shot.

While Chelsea would go on to win the match, Ronaldinho’s genius goal is still remembered.

Loris Karius garnered the limelight after the 2017-18 Champions League final for his atrocious goalkeeping. On the other hand, Gareth Bale had a game to remember. The game was tied at 1-1 when Madrid’s manager Zinedine Zidane sent Gareth Bale in. Unfortunately, the Welshman had an underwhelming season till then.

However, in the 64th minute of the game, left-back Marcelo put a hopeful cross into the box. But, Bale had other ideas as he executed the perfect bicycle kick to put the ball into the top-left corner. He would score another goal 19 minutes later after a calamitous error by Karius to help win Madrid their 13th Champions League title.

Imagine this, you need a goal to qualify for the next round of the Champions League, and you only have four minutes plus injury time left. And then your captain scores an out-of-the-world goal. Well, this is what happened in the 2004-05 Champions League. Liverpool needed a win by two goals to go above Olympiacos into second place.

Till the 86th minute, the score was 2-1 before a header from Neil Mellor fell kindly for Steven Gerrard 30 yards from the goal. And the Liverpool skipper produced perhaps his best goal, blasting the ball into the bottom left corner.

The goal is also essential as it started a run of games that ended with Liverpool defeating AC Milan in the final, dubbed one of the greatest comebacks in football.

How many times has anyone seen a goal so brilliant that even the opposition’s fans applauded it? Well, ask Cristiano Ronaldo. In the 2017-18 Champions League quarter-finals, Real Madrid travelled to Juventus and came off with a historic 3-0 win. However, it was the second goal of the night that garnered praise from all.

Right-back Dani Carvajal sent a cross into the box. The height of the cross made it almost impossible to do anything other than head it. Well, almost impossible is where Cristiano Ronaldo shines. The Portuguese rose an incredible 7.5ft high to score a stunning bicycle kick. The goal was so good that the entire Juventus Stadium rose to applaud the striker. Madrid would go on to win the Champions League with the help of one of the best goals in Champions League history which is certainly one of his biggest moments in the competition.

Back in 2011, the Real Madrid-Barcelona rivalry was at its ferocious peak. And fans of both the teams were in luck as the teams faced each other four times within 17 days in three different competitions. The first match was in La Liga which was a 1-1 draw with Ronaldo and Messi both on the scoresheet. Four days lantern Real Madrid won the Copa del Rey courtesy of Ronaldo’s goal.

So, by the time the UEFA Champions League match came seven days later, Barcelona had failed to win a game against their arch-rivals in two attempts. So, they would bring their best to Santiago Bernabeu. Lionel Messi was the show’s star as his brace helped Barcelona to a first win. The Argentine scored the first goal in the 76th minute. However, one of his best goals would come nine minutes later.

Receiving the ball inside Madrid’s half Messi went on a solo run getting past Lassana Diarra, Sergio Ramos, Raul Albiol and Marcelo before slotting the ball past Iker Casillas. Messi would go on to score 91 goals in the year, breaking the record of Gerd Muller and winning the Ballon d’Or. This is just one of the many records he would go on to break in his career.

Explained: What’s behind Tottenham’s struggles this season despite spending more than € 160 million

When Florentino Perez was made the President of Real Madrid, he started the Galacticos era. And in the first year, Claude Makelele and Luis Figo were brought to the club, followed by Zinedine Zidane a season later. The signings brought a La Liga and Champions League title.

And the Champions League title was won through a spectacular goal by Zidane. With the score tied at 1-1 against Bayer Leverkusen, Roberto Carlos sent in a cross from the left side. What followed next is one of the most iconic moments in Champions League history. The Frenchman adjusted his body and produced a ferocious left-footed volley that went past Hans Jorg Butt.