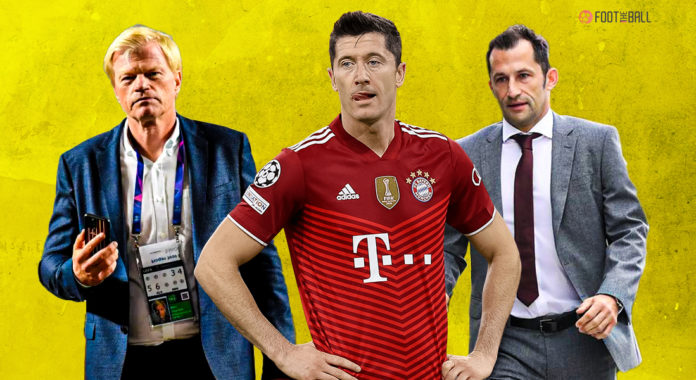 “My story at Bayern is over”. These were the words of Robert Lewandowski as he announced that he had no intention of staying at the German club. The statement came after weeks of rumours stating that Lewandowski was unhappy with how the club’s top hierarchy treated him. This was said to be the end of the Lewandowski saga at Bayern Munich

The Polish striker had joined the Bavarians in 2013 on a free transfer, yes, a free transfer from Borussia Dortmund. The club had hit two birds with one stone. First, they had landed a world-class striker on a free, and second, they had weakened their major rival Dortmund. And he excelled at Bayern, scoring 344 goals and providing 72 assists while winning 19 trophies.

His best season at the club was the 2019-20 season, where he scored 55 goals and provided ten assists. Bayern Munich won the sextuple that season, becoming only the second club after Barcelona to do so.

However, now it appears that Lewandowski’s nine-year relationship with the club is coming to an acrimonious end.

So, how did Lewandowski go from calling Bayern his ‘sporting home’ to denouncing the Allianz Arena, and that too so spectacularly?

The club had already seen defender David Alaba leave on a free and were keen not to let that happen again. However, for some reason, talks didn’t begin between the two parties.

It is now contemplated that Bayern CEO Oliver Kahn and sporting director Hasan Salihamidzic were looking to the future beyond Lewandowski. Bayern liked him, but they were looking to swoop for Dortmund’s Erling Haaland as succession planning. The Norwegian is a top-level striker, and any club having him could be assured for at least a decade.

Bayern director Hasan Salihamidžić tells Bild: “Lewandowski called me. Among other things, we spoke about his public statements. I clearly explained our position regarding his contract situation”, his words to @altobelli13. 🔴 #FCBayern

Reports also said Bayern were ready to offer him a contract far better than Lewandowski. But, ultimately, it was Manchester City who finally landed him.

However, the damage was done to Bayern Munich. Robert Lewandowski felt that he was not valued by the club anymore. This would be a major talking point during negotiations for a contract extension.

According to Bayern officials, one of the major stumbling blocks in the contract talks was Lewandowski’s agent Pini Zahavi. The Israeli football agent has a past with the club, which is not good. Zahavi was involved in the negotiations for David Alaba when the defender was at the club. The talks ended with Ex-Bayern president Uli Hoeness calling him a “greedy piranha”.

David Alaba didn’t renew and went to Real Madrid. He had a stellar season and won the La Liga before completing the season by helping Real Madrid to get their 14th Champions League title.

Now Zahavi is back again, and for the Bayern hierarchy, he has become the black sheep.

After reports stated that Bayern would keep him at the club even if he did not renew, Zahavi stepped in again.

Lewandowski does not want to do the preseason with Bayern! [Sport]

Lewandowski to Barca begins to enter its final phase. Pini Zahavi is beginning to press for the two teams to meet and close out a deal. pic.twitter.com/VphmHk3sQ2

“Of course they can keep Robert for another year, to be fair, he has a contract until 2023, but I wouldn’t recommend that to them,” he told German daily Bild.

Apart from that, defender Niklas Sule has already left the club this season for Borussia Dortmund after failing to renew his contract.

While the club can replace Alaba and Sule, the Lewandowski saga is a different case. There are just no top-level strikers that are available for sale this summer. Kylian Mbappe has extended his stay with Paris Saint Germain, while Haaland has chosen City.

Benfica superstar Darwin Nunez can be an option but is nowhere at the level of Lewandowskias of now.

RB Salzburg’s Karim Adeyemi was another option, but he has already joined Bayern’s rival Dortmund. Also, in Lewandowski, they have a player that can guarantee at least 40 goals per season. However, it is hard to tell whether any other striker can replicate that in their first season.

One year or three years?

According to reports, Bayern Munich and Lewandowski had agreed on the salary. However, things started to unravel over the length of the deal. The star striker wanted to sign a three-year extension. However, the club was only ready to offer him a one-year extension.

In the view of Kahn and Salihamidzic, a three-year extension was risky for the club due to Lewandowski’s advanced age. Last season, after Lewandowski’s injury, Bayern had lost to Paris Saint Germain in the Champions League quarter-finals.

And the club hierarchy thought that a long-term injury would be detrimental to Bayern financially on the field and off the field.

Lewandowski: "I think it's better for Bayern to invest the money they can get from me than to keep me until the end of my contract. I don't want to force anything. I want to find the best solution for both parties." pic.twitter.com/LZ1hBSchQQ

In addition, the Covid-19 pandemic had adversely impacted the club’s finances. And Bayern are looking to walk a tightrope between keeping their finances in check and ensuring they remain among Europe’s elite.

This has meant that the club faces tough choices, which has now angered Lewandowski. The Polish striker has made it clear that he wants to leave the club.

“I can’t imagine further cooperation after what has happened over the last few months,” he said

“A transfer will be the best solution. I trust that Bayern won’t stop me, just because they can.”, Lewandowski added.

Will Bayern keep his trust by allowing him to leave, or will they keep an unhappy player for another year and extend the Lewandowski saga? Only time will tell.