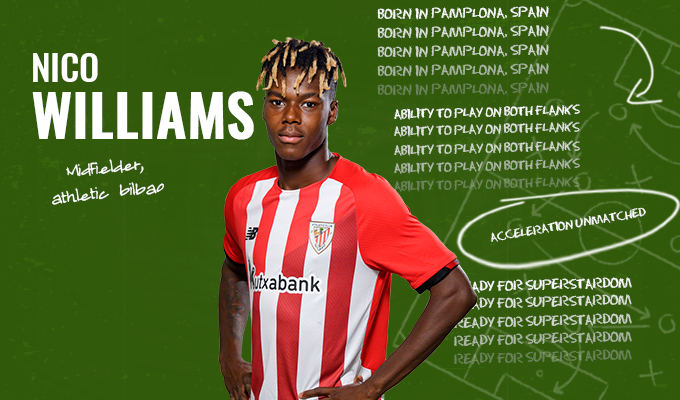 Athletic Bilbao are one of the most interesting clubs in the footballing world. Their Basque-only policy is one-of-a-kind, which has led to some talent coming through. Bilbao have benefitted massively from selling these players after developing them.

The current team is filled with fan favourites, led by the ever-present Inaki Williams. The longtime striker has played almost 200 consecutive matches, and over 300 in total. Williams recently changed his international allegiance to Ghana, and is raring to go at the 2022 FIFA World Cup.

However, he is not the only Williams at Athletic Bilbao right now. Inaki’s younger brother, Nico, is fast making a name as the next major star. Moreover, he is also a regular for the Spanish youth sides, and is linked with a big move soon.

Nico Williams was born in 2002, marking his entry into the world alongside such star names. Williams is of Ghanaian heritage, with his parents fleeing the Liberian Civil War, before settling in Spain.

Nico followed in the footsteps of his older brother, and was selected by CA Osasuna in 2012. He would only spend a year there, before linking up with the youth academy at Bilbao. Williams continued his rapid ascent, and was on the books of Bilbao’s farm team, Basconia, for the 2019-20 season.

Nico Williams made his La Liga debut for Athletic Bilbao on Wednesday and played alongside his brother (Iñaki Williams). Their family must be so proud! 😄 pic.twitter.com/weeJ2SPIXW

He was moved up to the reserve team in May 2020, before making his senior-team debut in April 2021. Williams would become a key part of the side during the 2021-22 season, as Bilbao reached the Copa del Rey final.

On the international scene, Williams made his debut with Spain U18s in 2020 and immediately impressed everyone. A solid run of run saw him being promoted to the Spain U21s, with whom he made his bow in September 2021.

It may alarm some fans that why is Nico Williams highly rated. After all, he had no goals or assists in La Liga in 2021-22. There is not to much to read in that, given he finished 2020-21 with nine goals and 12 assists for the reserves. His only goals came in the cup competitions. Two in the Copa del Rey, and the winner against Atletico Madrid in the Super Cup semis.

Athletic have stunned Atleti with another corner.

After it pinged around Nico smartly sidefooted from the edge of the box.

However, it is his overall game that is gaining much plaudits. Williams mainly plays on the right side of the midfield, either as an advanced winger or advanced forward. He averaged 7.81 progressive carries and had 5.92 touchers in the opponent’s penalty area (both per 90).

That placed him in the top 81st and 87th percentile of players across Europe. Moreover, Williams completed 2.76 dribbles per 90 for the 92nd percentile. Therefore, it is clear that defenders have a hard time stopping him.

He has a pass success ratio of 78%, which is more than decent for a 19-year-old. Finally, Williams is no slouch on the defensive end either. He applied 22.35 pressures per 90 (92nd percentile) and made 1.62 blocks per 90 (80th percentile). Therefore, it is clear that he wants to make an impact on both sides of the pitch.

Fast. Pacey. Difficult to stop. These are the words that best describe Nico Williams on the field. He has incredible acceleration and can burst past opponents at any given time. That gives Bilbao an added edge of transitioning from defence to attack.

Therefore, he is always looking to get on the ball and have a run. Moreover, his teammates are comfortable feeding him the ball when they are under pressure too. That is why Williams has caught the eye, especially his runs into the final third. However, his temperament can be curbed a little, as he can be a bit reckless. That comes with age, and he will learn as the years go by.

Bilbao have started trusting him more and more. Though he had only 11 starts in 2021-22, the fans had really taken him to heart. Even Inaki knows how special Nico is as he stated, “Technically I think Nico is more capable than me. He’s got a lot of confidence with both feet. I’m still improving my left.”

That brotherhood is extremely crucial in developing, and Inaki has been a major influence on Nico’s career. Moreover, he has also been protective of him in difficult situations. They are helping each other get better, and that is great to see.

The talent and untapped potential is massive in Nico. Bilbao are known for excellently developing young players. That has been on the mark with Williams. The club is revered for doing a number of great things, and Williams has the tools to succeed.

According to Soccerment, he won 47.6% of his aerial duels in 2021-22. Combine that with winning 43% of his normal duels, and both are on the rise. However, William’s physicality has to improve as he matures further.

There have been times when he has been brushed off the ball easily. Ball-carrying and ball-retention are two different things. Therefore, these are areas that will certainly interest future suitors.

How well Williams can carry on with his progress. His versatility is a boon, and he has also played on the left flank. That kind of play will definitely put him on the success track.

He is being heavily watched by top European clubs, and there is no doubt that offers will be coming soon. Manchester United are in need of a right-back overhaul. Erik ten Hag has been eyeing some major targets at Ajax, but Williams would be a shrewd buy.

However, he is not exactly the main target right now. Borussia Dortmund would be another intriguing option, given their history of nurturing talent. Nevertheless, for the time being, it does look like Nico Williams is staying in La Liga.