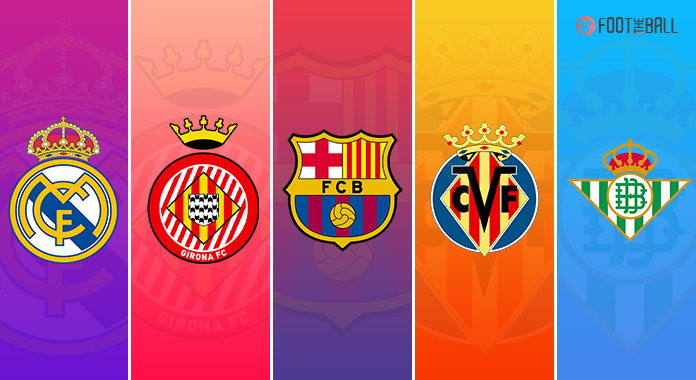 With the new season of European football almost upon us, the Spanish top-flight will also take off on the 13th of July, 2022. Real Madrid strolled through the La Liga title last season, with Karim Benzema topping the goalscoring charts.

Barcelona also picked up some form midway through the season after Ronald Koeman was sacked and club legend Xavi took over. Meanwhile, the Spanish league will also be without clubs like Granada, Levante and Deportivo Alaves after the 3 sides suffered relegation last season.

Keeping that in mind, this season promises to be an even tighter affair after clubs from both the upper and lower half have strengthened their squads. Fans all over the world would be itching to get the latest season started and would want to know which team has the better chance of silverware. So who takes the Golden Boot? Who makes it into the top 4? And who gets relegated? FootTheBall analyses all of it in the preview for the 2022/23 La Liga season.

Like every other Spanish top-flight season, Real Madrid and Barcelona are the top candidates for winning this season’s title. Los Blancos clinched their 35th La Liga title last season and with that moved 11 clear of Barcelona in terms of Spanish titles.

Italian manager Ancelotti and his troops finished a massive 13 points ahead of their arch-rivals Barcelona. That was mainly due to the form of King Karim Benzema and his partner in crime Vinicius Junior. The duo combined for more than 100+ goals and assists in a single season which was a record in itself.

This video was cut short because #Laporta sold the store as another economic lever#Kounde #FCBarcelona pic.twitter.com/EFWpvkAJDd

Carlo Ancelotti’s men will walk into the new campaign as European champions, but they may face tougher competition this time around in their fight to secure a record-extending 36th crown in La Liga. Meanwhile, their rivals Barcelona improved after the arrival of club legend Xavi as manager last season, while Sevilla and Atletico Madrid shouldn’t necessarily be written off either.

It is worth mentioning that Sevilla only lost four games last season – the same as Real – but too many draws, particularly on the road, proved their undoing. Barcelona won the last of their 26 titles in 2019 but there is renewed optimism at Camp Nou as Xavi prepares for his first full season at the helm, and with Robert Lewandowski among their ranks after his move from Bayern Munich. Atletico Madrid have Saul back after his unsuccessful stint at Chelsea and will feel they are genuine title contenders, having won the title twice under the guidance of Diego Simeone.

Xavi’s arrival in November sparked a resurgence for Barcelona but they still picked up five fewer points than Real Madrid since he took the reins and that was while Real Madrid maintained their successful Champions League campaign.

The Catalan club have strengthened their squad with the likes of Raphinha and Robert Lewandowski but internal politics(mainly the ongoing Frenkie De Jong saga) and cashflow issues make them hard to back, while Real Madrid haven’t sat on their laurels, either, with the arrival of Aurelien Tchouameni and Antonio Rudiger. Real and Barca are likely to be the top two, and with Atletico Madrid also a level above the rest of La Liga there is value in backing Real to finish first.

Aside from those three giants, Sevilla are the favourites and rightly so given their exploits last season – but there are a few reasons to suggest they may miss out on a top-four finish.

The Sevillistas have lost some important players, most notably defender Jules Kounde to Barcelona and Diego Carlos has made the move to Aston Villa, and they will have a Champions League campaign to focus on. That leaves them vulnerable in the top four battle and city rivals Real Betis may be the team to benefit. Betis actually won one more La Liga game than Sevilla last season with 19 victories as they came in fifth, just five points off the pace.

Manager Manuel Pellegrini has a good record of taking underdogs into the Champions League having led both Villarreal and Malaga into Europe’s premier competition previously and they look a stronger team going into the new season.

Girona, Valladolid and Almeria are the three promoted sides in La Liga and all are among the favourites to be relegated, although there are no odds-on teams to be relegated in what looks to be a competitive bottom half of the table.

Rayo Vallecano, their form dramatically dipped after the Spanish winter break and they won just two of their final 17 games – losing 11, including each of their last three. Rayo have also lost last season’s top scorer as Sergi Guardiola has returned to parent club Valladolid and they could be set for a difficult campaign.

Mallorca survived by just a single point last season and are expected to be involved in the relegation tussle once more, while Elche have one of the smallest budgets in La Liga.