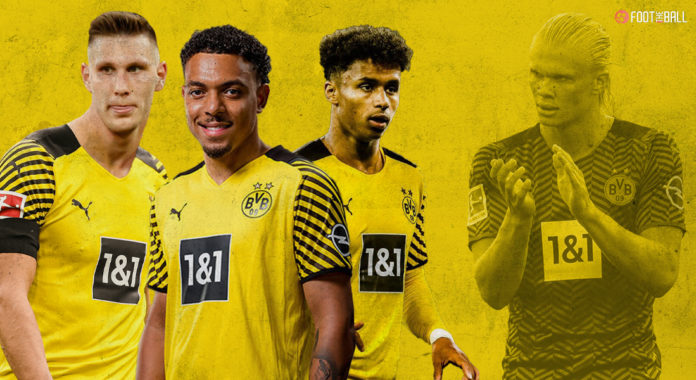 It is beginning to look like an underwhelming season for Borussia Dortmund once again. Granted, they smashed six goals past Borussia Monchengladbach in their last match but the hopes of silverware have all but evaporated. The highlights reel for losses make for embarrassing reading: a 3-1 loss to Bayern Munich in the Supercup, exiting the Champions League on goal difference, an embarrassing 2-1 defeat to second-division side St. Pauli in the DFB-Pokal and losing 4-2 at home against Rangers in the first-leg of the Europa League round-of-32.

Erling Haaland has work to do in the second leg against Rangers…#UEL pic.twitter.com/WaakO1JbbW

They need at least three answered goals to avoid another humiliation though the Bundesliga already looks lost. Dortmund trail Bayern by six points with 11 matches remaining and few will give them a chance of orchestrating a turnaround. On top of all of this is the uncertainty surrounding the future of star forward Erling Haaland, whose €75m release clause becomes active in the summer.

No doubt there will be a whole host of top clubs after him and leaving is almost definitely on the cards. While many observers might feel that will further weaken the team, Haaland leaving might actually serve as the catalyst for a rejuvenated Dortmund next season.

No, not Benzema from Real Madrid but Adeyemi from RB Salzburg. The 20-year-old forward is very close to joining Dortmund before next season as negotiations continue, though personal terms are said to have been agreed already. His signing is the sure sign that the club is preparing for a Haaland-less 2022-23 but Adeyemi is no slouch.

Karim Adeyemi looks like the most stylistically similar young talent to Mbappé. He has that same trait of being able to create & score goals out of nothing after taking defenders out of the game with his pace & 1v1 dribbling.He had Bayern’s back 3 in trouble on several occasions.

He is the leading scorer in the Austrian top-flight with 14 goals coming at a rate of 0.93 per 90. Being the central point of attack, Adeyemi is heavily involved in the team’s play with 0.63 goal-creating actions, 5.82 progressive carries, 1.89 carries into the final third and 2.05 carries into the penalty area (all per 90) putting him in the high 90th percentile of players in similar positions over the past year.

Coming to the league itself, Adeyemi has taken 50 shots (fourth-most), 3.33 shots per 90 (eighth-most), 27 shots-on target (second-most), and 1.80 shots-on target per 90 (most). There is no doubt that he is a special talent and having already played for the German national team, his future looks extremely bright and his decision to join Dortmund makes strong sense.

The club are extremely well-known for developing burgeoning talents with the likes of Marco Gotze, Marco Reus, Jadon Sancho, and Ousmane Dembele having all made a lasting impression. Though Adeyemi might struggle in the beginning to match Haaland’s output, few will bet against him to make good on his promise sooner rather than later.

Mix of experience and youth

Adeyemi’s addition to the team is great news but he is another very young player. Donyell Malen has not had the greatest of debut seasons with just four goals and three assists in the league so far and is another who can reap the benefits of regular gametime. Marco Reus is a steady presence who will be expected to take more of the scoring burden and the captain is not one to shy away from challenges.

A front two of Reus and Adeyemi/Malen will be the perfect mix of experience and youth as the next generation slowly eases into the lineup. 17-year-old Youssoufa Moukoko is another in the development stage who will only see more minutes next season. With the attack taken care of for the future, it is the defence that has been concerning supporters at the Signal Iduna Park the most.

Dortmund have shipped 36 goals in the league which is the second-most in the top 12. By contrast, Bayern have conceded only 26, the same as Europe-chasing Freiburg and Mainz while Leipzig have been breached 28 times. Mats Hummels looks out of his depth as his quickness and physicality have taken a sharp downturn. Manuel Akanji has also not been his usual self and is currently out injured.

Dan-Axel Zagadou still needs more understanding of the game in order to establish himself as a regular and given all of these issues, Dortmund made one of the smartest deals for next season by signing Niklas Sule from Bayern. Sule’s contract was due to expire at the end of this season and with no offer coming from the Bavarians, it was Dortmund who were the quickest to act as they recognized the need to strengthen a porous backline.

The German centre-back is also an adept ball player and likes to progress the ball up-field as the chart above shows. Dortmund will rely heavily on him to start attacks from the back and play the long passes that set their pacey forwards through on goal.

Can they challenge for silverware?

For all of Haaland’s superior gameplay and impeccable scoring record, Dortmund have only the DFB-Pokal triumph of last season to show for it. They finished 14 points behind Bayern and were knocked out of the Champions League in the quarter-finals. With the departure of Haaland an inevitability, Dortmund can move onto a more team-based approach where they will not have to rely on a single player in order to win matches. The Bundesliga title is a tough dream but winning the domestic cup and making a deep run in the Champions League should be the basic objectives. Marco Rose will have his hands full in getting the best results from the remaining games in order to finish in the best position possible and it starts with overturning the deficit against Rangers on Thursday.