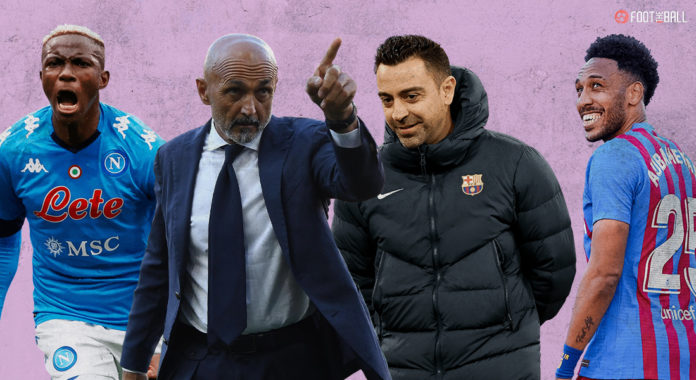 Napoli took a nice early lead last week but were under the pump for almost all of the remaining match. The defence was extremely overworked and only some wasteful finishing helped them earn a draw. Luciano Spaletti’s side were fairly dismal in their most recent outing against Cagliari that was a 1-1 draw as well.

Back at home in Europe, they do have the personnel to get the job done. Victor Osimhen is a fearsome striker for any team while Lorenzo Insigne can provide the craft. At the back, Kalidou Koulibaly is the wall but the midfield needs more control certainly.

Barcelona have really been rejuvenated by their January additions, with Pierre-Emerick Aubameyang netting a hat-trick against Valencia at the weekend. They were also the far better side last week in Italy but Ferran Torres missed some glorious chances to keep Napoli alive in the tie.

Xavi will be hoping that his side get the job done in a professional manner as always but with away goals not counting, they will need to score on the night. Ousmane Dembele looks to have put his contract troubles aside and has become a key weapon off the bench while Pedri and Gavi are full of bursting energy. The Catalans know they need to win and exit at this stage will be another new low in their recent past.

Lorenzo Insigne suffered a muscular injury in training and is a doubt for the clash. Giovanni Di Lorenzo and Matteo Politano should be back from their respective ailments.

Ronald Araujo’s return against Los Che was a welcome sight for fans and management.

Osimhen was one of the few bright spots for Napoli last week, giving the Barcelona dence panty of problems all night. Seven goals this season in the league, including the leveler against Cagliari, may not be his best yet but his performances have been getting back on track in recent times. He has been involved in 3.15 shot-creating actions P90 with 6.78 touches P90 in the opponent’s penalty area, which just goes to show how involved he is in attacks.

Osimhen’s towering presence in the box is also a threat through crosses as Napoli have Politano and Dries Mertens. He has already shown that he has the pace to get the better of anyone not named Araujo and Osimhen’s quickness can be the difference on the ground. If he can set up transitions and hold the ball up, Napoli can definitely trouble the Blaugrana.

Adama Traore has been a revelation with his former club, arguably being most dangerous attacker. He has already set up three big chances and has two assists in La Liga but his greatest asset remains his blistering speed. Traore leaves defenders in the dust with his change of pace and ability to get to the byline repeatedly. Opponents are unsure of whether to commit or let him run at you and make a block.

🔵🔴 Adama Traoré continues to be DECISIVE for Barcelona

The latter had Juan Jesus in all sorts of trouble as it was Traore’s cross which brushed his fingers leading to game tying penalty call. Furthermore, he also serves as the outlet when Barcelona are under the pump defensively as he can take the ball and run in the opposite direction. It’s pretty obvious that Napoli need a better gameplan to stop one of the fastest players in the game otherwise their backline can expect another night of heavy work.

With the spirit of Maradona watching on, this match has all the makings of a classic. There’s no doubt that both these teams are two of the favourites for the trophy but one will be heading home. FootTheBall predicts a 2-1 win for Barcelona.