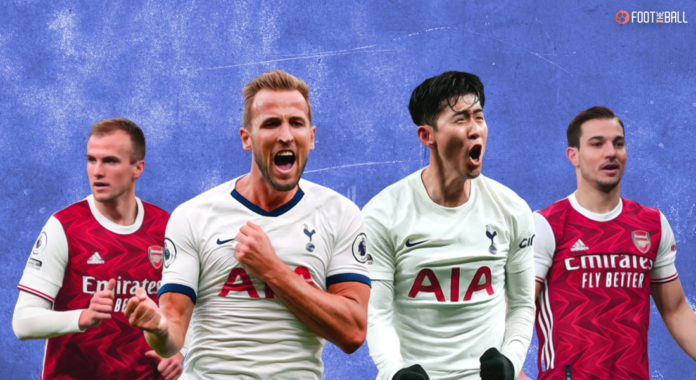 Tottenham Hotspur made a major dent in Arsenal’s top four hopes as they defeated their North London rivals 3-0 at the Tottenham Hotspur Stadium on Thursday. Harry Kane scored twice to go with Heung Min-Son’s strike after Rob Holding was sent off in the first half.

The match had a cagey start with both sides looking to establish a foothold. A win for Arsenal would have confirmed a top four spot while a draw would stack the odds heavily in their favour. Mikel Arteta though had said his side would play their natural game and they did press high in the opening few minutes.

Martin Odegaard had the first shot of the match after Bukayo Saka won the ball high up the field but Hugo Lloris was comfortably behind it. Neither side wanted to make a mistake under a raucous atmosphere and there was a distinct edge to the game.

It was a clumsy error that brought the first talking point however in the 20th minute. Dejan Kulusevski floated in a ball from the right towards the back post and the rising Son was barged into by Cedric Soares. It was a bit soft but Paul Tierney made no mistake in pointing to the spot. The penalty was duly converted by Kane to give Spurs the lead.

The goal gave the home side more confidence and their press started to click better. Tomiyasu had to be active to block a Kane shot and Emerson fired wide soon after. Things turned worse for Arsenal in the 33rd minute when they were forced down to 10 men.

Rob Holding, already on a yellow and two warnings, stepped into Son’s run beyond the defence and Tierney once again had no option but to send him off. A goal and a man down, Arsenal struggled for discipline and it was evident in the second goal as Tottenham extended their lead through Kane once again.

Son whipped in a corner that was flicked towards the back post by Rodrigo Bentancur where the English striker dived in on the line to force the ball over. Spurs were much more comfortable with the two goal lead and saw the game to half time, despite a decent effort from Eddie Nketiah.

Behind at the break.

The second half began on a morose note for Arsenal as Spurs added a third within two minutes. Kane tried to turn in the box but was blocked. The loose ball fell to Son who curled in a nice finish first time. The threat of a derby embarrassment loomed large for Arteta’s men.

That effectively killed the game with Conte’s side happy to retain possession and pick their moments to attack while Arsenal tried unsuccessfully to find some joy on the counter. Aaron Ramsdale made two excellent stops around the hour mark to keep the score remotely respectable.

Heung Min-Son had a glorious chance to draw level with Mo Salah in the golden boot race but the Korean inexplicably fired over from Sessegnon’s cross.

The last time Arsenal qualified for the Champions League was in the 2016-17 season and most of that squad has moved on. The current crop has a lot of talent and potential but they certainly lack the experience of being in a top four race.

The pressure seemed to get to them on Thursday as they threw the match away with silly mistakes. Cedric’s barge was unnecessary while Holding had been warned by the referee. Arteta too might have benefitted from a more conservative and pragmatic approach to the game.

Despite Arsenal’s self-combustive tendencies, it was Spurs’ ruthlessness that stood out in the encounter. Harry Kane and Heung Min-Son are making an increasing case to be the Premier League’s most lethal duo.

Kane’s two goals took him to 15 for the season in the league, the joint fourth-best while Son’s strike took him to 21, just one behind Salah at the top of the charts. The pair have been excellent over the past few seasons and one feels that they deserve a trophy to show for it which will be their aim in 2022-23.

Spurs may have won the three points and the bragging rights but the fate of the top four still lies in Arsenal’s hands. They cannot afford to drop any more points and both sides have potentially tricky fixtures in their last two matches.

Arsenal play relegation threatened Everton on the final day while Spurs host the rejuvenated Burnley next week. Arteta will have a difficult task of getting his team ready for the next match while Spurs have a day less to recover. The final spot in the top four is still there for the taking.