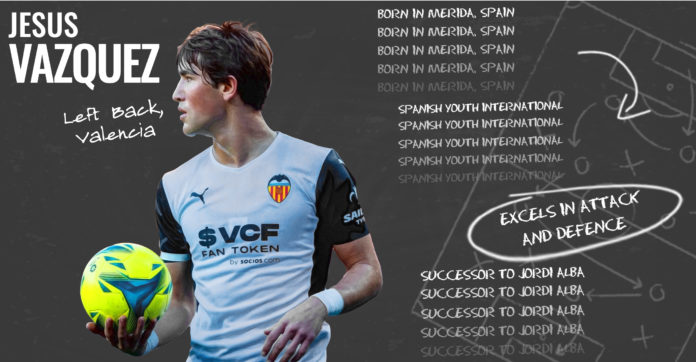 The demand for fullbacks has changed in football over the years. Gone are days of only defensive play and stopping wingers. Nowadays, fullbacks are needed to heavily contribute in attack, alongside their other duties. This is where Jesus Vazquez has been shown his potential.

The 19-year-old left-back with Valencia has been a regular sight for fans, sharing duties with Jose Gaya. Vazquez has all the traits necessary to become a fantastic option for both club and country.

Valencia are famed for producing top-quality left-backs, with Jordi Alba, Juan Bernat, and Jose Gaya being the most famous examples. Vazquez has shown qualities that he can continue that trend.

🎂Today is the birthday of a player made in VCF Academy

Jesus Vazquez is not the only one in his family who is famous in Spain. His father, Braulio, was a player in Spain for almost two decades before going into management. Moreover, Braulio Vazquez has also served as sporting director at Valence and Real Valladolid, before moving to his current role at Osasuna.

Therefore, it is not like Jesus Vazquez was a total unknown. He was born in 2003, joining other illustrious names such as Ajax defender Devyne Rensch and Manchester United’s Hannibal Mejbri. Vazquez was enrolled into the Valencia youth setup when he was five.

That means he has only ever played for one club, even at the youth level. Vazquez had been making his way up the different age groups, before making his Valencia B debut in November 2020. His first-team bow came just a month later, in a match against Terrassa FC in the Copa del Rey.

Vazquez became a regular with the B side, making 22 appearances and scoring once. By then, he was also an established member of Spain U18s, having played with the U16s and U17s since 2019.

Jesus Vazquez made his long awaited La Liga debut on August 28, 2021, and has been with the senior setup ever since. He has also progressed to the Spain U19s, where he continues to impress.

A young star with the most minutes in Europe. Read all about left-back Aaron Hickey

Vasquez featured 15 times for Valencia in La Liga in 2021-22, racking up 800+ minutes. There were eight starts, but the promise is abundant for all to see. Vazquez did not score or assist in his debut senior season. However, he was involved in a lot of other ways. Vazquez was involved in 15 shot-creating actions, with 1.66 per 90.

Moreover, he has stood out offensively among players across Europe. Vazquez applied 18.27 pressures and made 2.99 tackles per 90 over the campaign.

That puts him in the 93rd and 89th percentile respectively, which is mighty impressive for a 19-year-old in his first season. Therefore, it is clear that Vazquez has been repaying the trust shown in him, which has made him earn his spot.

He is also no slouch when it comes to blocking, with 1.99 made per 90. Of course, it is a very small sample size. Vazquez’s defensive nous has been a great area of joy for fans and coaches.

Too many fullbacks nowadays only focus on their attacking output, neglecting the defensive side. Vazquez is aiming to break the mould.

There are a lot of things to get excited about regarding Jesus Vazquez. He is a solid presence on both sides of the ball. Vazquez is a great outlier, given his extreme comfort with the ball.

He manages to get high up the field, either through dribbling or by setting up passing networks with players. Moreover, Vazquez is adept in tracking back and is not win to lose out aerially either.

However, not everything can go perfectly at 19, and that is the case with Vazquez. Sometimes, he is guilty of overplaying and running into traffic, which leaves his team vulnerable at the back.

Another thing that has been a slight issue is his lack of concentration at times. These can and will be improved with age, but the fact remains that Vazquez has taken every challenge head-on.

As mentioned above, Jesus Vazquez is the latest in the line of established left backs from Valencia. However, there are some key areas of difference as well. Vazquez uses his 6ft frame to great advantage. He won 2.10 aerial duels per 90 over 2021-22, which put him in the 90th percentile.

Therefore, it is clear that beating him in the air is not an easy feat. Vazquez has been likened to Gareth Bale during his Spurs days.

The Welsh talisman was a beast from left-back, bombing forward at regular intervals. Vazquez has certainly shown the same flair for dribbling with 2.10 completed per 90.

That put him in the 98th percentile, meaning he is one of the best left-backs at this in Europe.

Of course, the comparisons will continue as he develops. Similarly, Vazquez has taken all of this in his stride and has become a key member of the national side too.

There are quite a few European clubs scouting Jesus Vazquez. Arsenal, Juventus, Real Madrid, and Barcelona are all monitoring the 19-year-old. It will certainly be poetic if Vazquez moves to Camp Nou as the successor to Jordi Alba.

However, the likeliest outcome remains that Vazquez stays at Mestalla. Vazquez has a contract till 2025, and playing on for another season is the best option. Valencia are looking to sell Jose Gaya to generate funds, meaning Vazquez will have a more important role. With the 2022 FIFA World Cup in Qatar coming up, he will be bidding to be on the plane.