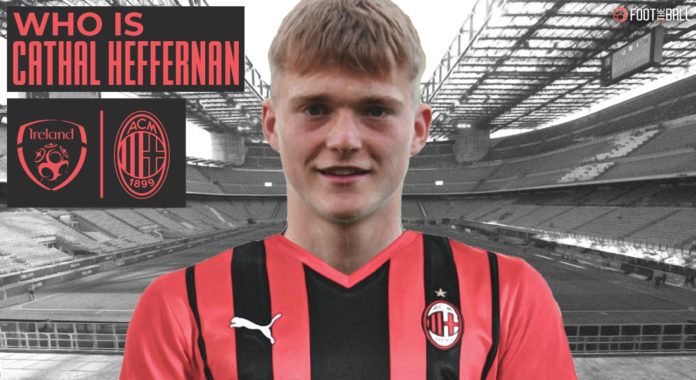 AC Milan have been riding a wave of highs in recent times. The Rossoneri were crowned champions of Serie A after 11 years. Similarly, their young core has been a cause of great celebration for the fans. That bunch is only getting younger with the addition of Cathal Heffernan.

The 17-year-old Irish centre-back had been on loan at Milan from Cork City since January. Now, the Ireland U17 captain is set to sign a permanent deal, continuing the youth revolution under director Paolo Maldini.

Scottish right back Calvin Ramsay is heading to Liverpool, here’s what you need to know!

The Heffernan name is legendary in Irish sports, and Cathal would be looking to build on that.

Who is Cathal Heffernan?

The first thing to know about Cathal Heffernan is his parents. His father, Rob, is former Olympic Bronze medalist, while his mother, Marian, is an Olympic athlete. They have represented Ireland at the biggest of stages, so Cathal had big shoes to fill.

He has started in a brilliant fashion, making his debut with Cork City in 2021. The defender is comfortable on either side of a back four, and given Stefano Pioli plays with the same formation, it is shaping up to be a great suit.

Heffernan has all the qualities needed to perform at the highest level, and is in a great environment.

The young lad has the potential to become a great defender, much like the man who signed him. Heffernan has been a steady head for the Irish national team, and given his parents’ background, he knows what needs to be done.

Cathal used to be on tour with his father and mother, which meant growing up and experiencing all kinds of different environments. Additionally, he same has been echoed by Rob, stating,

“I used to rent a cave in Sierra Nevada in Spain and he had grown up when we were both training there, so there’s no novelty factor now. He was a sprinter like Marian, very strong and fast and even has a Munster long jump title from Under 19s.”

Therefore, the parents have always focused on Cathal’s development instead of following glory. Moreover, that kind of mentality comes in extremely handy when you are a player at Milan.

According to Transfermarkt, Cathal Heffernan has played 15 times for Milan U18s and once for the U19s. He has mostly been deployed as a central defender, which is his natural position.

Heffernan will look to emulate the footsteps of Aaron Hickey, the star young leftback for Bologna in Serie A

However, Heffernan has also played twice as a right back, which is being done with an eye on the future. Moreover, Pioli is known for demanding players have versatility, which could be a key factor in his senior career.

Cathal Heffernan has been a astute player, right from his early days. Growing up with two Olympians has Heffernan grounded. Furthermore, he is a solid passer, who has also shown flashes of speed. Heffernan can make his way out of a sticky situation with the ball. Milan are known for developing young defenders currently.

Finally it’s official. So proud of you Cathal this is only the beginning ❤️ Now it’s time to work #teamheff #driveon pic.twitter.com/gLRkm2jKTU

They have made Pierre Kalulu and Fikayo Tomori into stars. Heffernan can follow in that same path. Though it might take more time, Milan are not shy of giving chances. However, Heffernan’s strong physical nature will also help in the competitive setting of Serie A.

Moreover, Serie A is becoming a favoured destination for young stars, and Heffernan has come with the right attitude. He will be joined by other Irish youngsters too.

Cathal Heffernan has gotten really close with former Manchester City player Stephen Ireland. The midfielder was crucial in Heffernan getting trials at Premier League clubs and Celtic. Moreover, he has remained a key part of the discussions with Milan.

However, the rules of signing players post-Brexit meant that Heffernan had to wait till he turned 18. Therefore, the player and his family decided a move abroad was the best option. Milan can be a great stepping stone for the future, and become a household name.