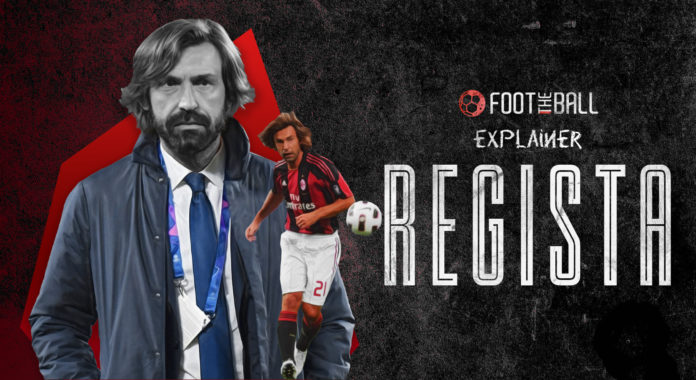 Football, by many, is considered to be an art. If that’s the case, then the Regista is perhaps the position that deploys the best artist. Several positions in football have become common words in the football lexicon. There is the Raumdeuter, the Thomas Muller. There is the Claude Makelele role, the Mezzala, the False Nine, the Libero, the Inverted Wingers, the Inverted Full Backs, the Sweeper and whatnot. However, the Regista is perhaps the most talked about role in modern football.

Regista is also a position that has stood the test of time. It originated in the 1930s and is still an integral part of modern football nine decades later. The reason for its survival is simple, the qualities that a world-class Regista has are tough to find because of the role’s demands.

Being a Regista requires a brilliant vision which has to be backed up by exquisite passing and a keen positional sense.

So, what is a Regista, and how has it survived a century of innovation in football?

The word Regista comes from Italian, which means ‘Director’. So, the Regista is a player who directs and controls the game’s flow. They are the master puppeteer who dictates the team’s offence. They are the link between the defence and attack, just like the number six.

A Regista spends a lot of time on the ball, which helps him dictate the game’s tempo. Like many roles in football, the Regista owes its birth to Italian football. In the 1930s, the Italian league was a hotbed of the most innovative coaches anywhere in the world.

Gippo Viani, Erno Egri Erbstein, and Vittorio Pozzo are some of the names whose tactics revolutionised football, some of which continue to this day. Pozzo was the inventor of the Regista, who deployed the position in his Metodo system. Pozzo was the manager of the Italian national team at that time.

Italians coaches are the only tacticians in world football, that truly define players roles and what they do.. be hearing terms like Regista, Mezzala, Trequartista and Carreiro just a few terms used for midfielders. You’ll be amazed when these roles are broken down. @Edwyeen

However, during the 1930s, teams put less emphasis on defence. So, Pozzo used a 2-3-5 formation with five defenders. The two defenders in the backline were tasked with only defensive duties. And the man playing as the centre half in the second line acted as a Regista.

And Pozzo picked a 32-year-old Luis Monti to play that role. Monti, who has the unique record of being the only player to play in two World Cup finals with two different teams, was the perfect player for the role. Monti had reached the 1930 World Cup with Argentina and, after the tournament, took his talents to Italy.

He was granted Italian citizenship, and Pozzo deployed him as the Regista. With Monti in the team, the Italians won their first World Cup. This role would slowly spread to other European countries, where it has survived.

Is Arsen Zakharyan the answer to Chelsea’s midfield woes?

The Regista role in football

The Regista plays in the same area as a traditional number six, but the qualities they possess are vastly different. The number six is generally a defensive beast whose job is to disrupt the flow of the opposition. On the other hand, the Regista conducts the flow of the opposition. Like the number six, he positions himself just ahead of the centre-back. However, he does this to receive the ball quickly from the centre-backs, after which he can move the ball forward through his passing.

So, while the number six is a ‘destroyer’, the Regista is a ‘creator’. Until the 1970s, the role was still not mainstream. However, the invention of ‘Total Football‘ changed that. A pass-intensive system had taken the world by storm for the first time. And while it would take some time, football would start integrating tactics that required a Regista.

A good player on the ball can keep his cool and play his way out of pressure situations. However, since the Regista holds the key to his team’s play, the opposition always tries to pressure them. And this is where the role makes its money when world-class Regista uses their quick feet and brilliant vision to keep their team’s attack going.

When Pep Guardiola’s tiki-taka won Barcelona a sextuple, the Regista position got a massive boost. And now, many teams deploy them. Moreover, some rare players like Liverpool’s Fabinho have the qualities of the number six and Regista.

However, to counter that, teams now play a three-person midfield which deploys a midfield destroyer. This reduces the role’s defensive responsibilities, allowing the player to focus on their team’s offences.

The relevance in modern football

While many roles in football have fallen to the ‘nothing is permanent but change’ law, Regista has continued to shine. This is because the position represents modern football, where you must be multifaceted to succeed at the top level.

So, who are the top Regista in football?

Well, one of the best comes from the land where the role originated. Andrea Pirlo was one of the best orchestrators for AC Milan, Juventus and the Italian football team. Pirlo was integral to the famed AC Milan team before joining Juventus. At Turin, he would play some of the best football of his life to help the Old Lady become a top team in Serie A and Europe.

Thiago Alacantara is one other player. He also has the advantage of playing alongside Fabinho in Liverpool, which negates his defensive weaknesses. Even the great Xavi played as one under Luis Aragones when they won the Euro 2008 which led to the rise of one of the best teams in football’s history.

Almost a century after its discovery, the role remains an integral part of it, and it appears it will continue to be so in the future.