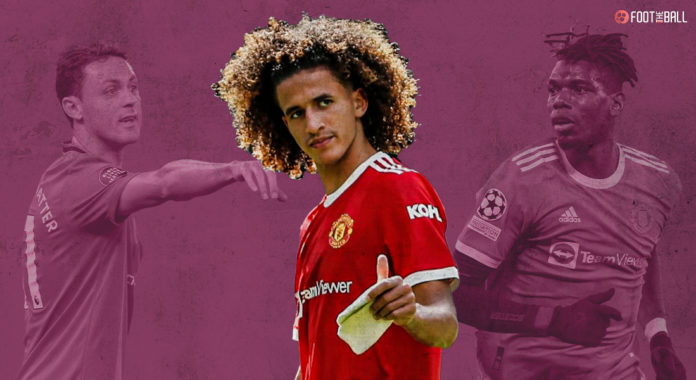 Manchester United have had an up-and-down season so far. They are clinging onto the fourth-position and could yet lose it. In the meantime, they have confirmed that the search for their new manager is underway. No matter who arrives, they are going to have to deal with a longstanding problem. The midfield conundrum has been dragging on for quite some time, with no clear solution being provided. Paul Pogba’s contract runs out in the summer. Nemanja Matic is not getting any younger.

Fred blows hot and cold across matches. Scott McTominay is showing jumpy genes in rushing into tackles and getting spun too easily. Nevertheless, at least two of them are set to remain in the lineup for the foreseeable future. This is where a true wildcard player can take centre stage as FootTheBall explain below. That player is Hannibal Mejbri, the uber-talented 19-year-old who has already been making a sizable impact.

The ever ready player

Hannibal Mejbri has been one of the most exciting youngsters seen in United’s academy for a long time. The Red Devils signed him from Monaco in 2019, and the impact was imminent. The 16-year-old settled in quickly and made his debut for the U17s in September. Mejbri’s strong performances quickly caught attention and he was promoted to the U23s next year, where he continued his rapid ascent.

Weakness ❌
– Temperament (Can be channeled)

He made his first-team debut on the last matchday of 2020-21, but is yet to appear this season. Moreover, Mejbri has continued his progress with the youth setup and has been ready to take the step up. However, it seems unlikely that Mejbri will get a chance before next season. That is when the interesting questions start.

United do not have the best of midfields going around. Bruno Fernandes is a fixture but the other options change almost constantly. Pogba has shown flashes of brilliance though the consistency has been missing greatly. Matic has shown his age greatly and will have to be replaced soon. This is where Hannibal Mejbri can come in on his own. The teenager has a calm head on his shoulders and his versatility will hold the key. Mejbri could be used as a number 10 or 8 or 6.

This is the lad who is being prepared to be a future #MUFC starter. Hannibal Mejbri has everything in his locker to be a success, so United won't be signing a central midfielder. He'll learn from Pogba & Bruno. He's a very exciting talent. We're lucky to have him. pic.twitter.com/lAERmvqI0l

The first one looks unlikely, given Fernandes’ hold on the spot. Mejbri will have to settle for a substitute in that scenario. The strongest impact can come from him being played behind Fernandes. With one of Fred or McTominay holding down the defensive pivot, Mejbri can be in between the two lines of midfield.

Moreover, his willingness to advance the ball and linkup play will be best suited for this position. Fernandes requires help through the middle and Mejbri is the perfect foil. Furthermore, he can also drift out wide to collect the ball. Therefore, one of the wide attackers can play through the centre during that time and take shots.

Hannibal Mejbri has been directly involved in 7 goals [3G 4A] in 6 appearances when starting as an attacking midfielder this season.

Coming to his final option, Mejbri can be alongside either Fred or McTominay but that seems unlikely. This position will limit his attacking output and restrict how much he can move forward. Though he can still impact games with long balls over the top and threding through balls. Mejbri is willing to perform wherever he is required and his commitment should not be a problem.

Can Hannibal Mejbri be the sole solution?

The need for a defensive midfielder has been clear for quite sometime now. Hannibal Mejbri is a special talent, probably the best of the United academy. He will be seeing more game time sooner rather than later because of his obvious quality. Mejbri excels with the ball, and his team plays better when he moves into top gear. Tunisia reached the final of the FIFA Arab Cup last year, and Mejbri was a big reason why. He put in stellar performances against UAE and Egypt, which had more people sit up and take notice. Mejbri is the youngest star for both club and country, something that does not faze him in the least.

Hannibal Mejbri was awarded the Man of the Match award as Tunisia beat the United Arab Emirates 1-0 in a decisive match which helped them progress to the quarter-finals of the tournament.#FIFArabCup #MUFC pic.twitter.com/bRmb9rm5oi

Nevertheless, it is unlikely that United will pin all their hopes on Mejbri becoming an instant hit in the Premier League. The teams around them are improving every year, and United will know that winning silverware is a daunting task. What is more predictable is United bring in an experienced midfield option who can start most games. That helps Mejbri come off the bench more often and continue featuring in senior games.

To sum it all up, Mejbri has all the qualities necessary to become a regular for the Red Devils. Now it depends on the new manager on how much he wants to use him.