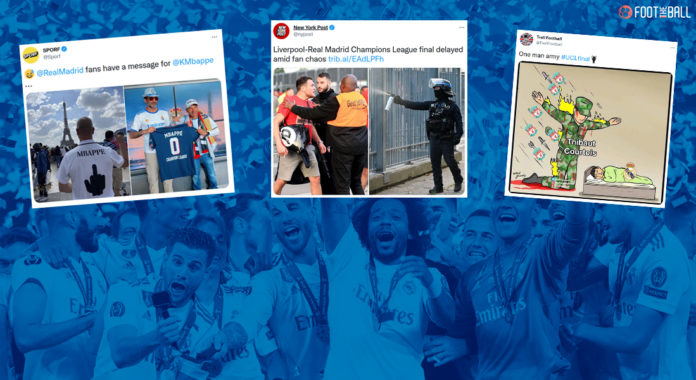 Real Madrid won their 14th UEFA Champions League title by defeating Liverpool 1-0 in the final. Vinciisu Jr was on strike for Los Blancos as he slotted the ball past Alisson Becker in the 59th minute. Liverpool, who had dominated most of the match, could not find the back of the net. For Madrid, the hero was Thibaut Courtois, who produced nine saves to deny the Reds.

What started as a brilliant evening turned sour after the match was delayed due to fans being not allowed in the stadium. The situation got so worse that the kick-off had to be delayed by 36 minutes.

According to UEFA, the delay was due to fans arriving late in the stadium. Majority of the fans were from Liverpool who had failed to get inside.

Here are some of the best reactions from the match:

Liverpool fans alleging they were pepper-sprayed

Small number of fans running through gates at Stade de France, security unable to stop them, lots of fans still to be allowed in #ChampionsLeague #liverpool #realmadrid pic.twitter.com/Do1cwPYlig

A look at Paris right now as Liverpool fans are stuck outside the stadium due to poor crowd control and can’t get into the Champions League final @StoolFootball pic.twitter.com/ye8cNlA8cS

Nonsense for UEFA to suggest this is down to fans arriving late. I know LFC fans who arrived at Stade de France two and a half hours ago and have only just got inside the ground. Complete lack of organisation. Dangerous bottlenecks.

As the Champions League final was about to kick off, this was the scene outside the stadium in Paris pic.twitter.com/V4APvWYNn9

❗️Marvin Matip told me: „The organisation around and in the stadium is unworthy of a CL final! Using tear gas in areas with children and uninvolved fans is dangerous!“ @SkySportDE #UCLfinal https://t.co/WLry0wUsOx

Earlier in the day, both sets of fans were out in Paris’s streets to show support for their club.

You feel as if you’re a member of a big society, where you’ve got thousands of friends all roundabout you ❤#UCLfinal pic.twitter.com/Il9UJCVAyI

While the Frenchman did not feature in the final. Real Madrid fans made sure that they made their message clear in the city where Mbappe plays his football.

When you failed to take your chances, you are hurt Viniciusly.

Whoever that was marking Diaz can finally breath, jesus christ he was a pain with his pace.

Micheal Owen : “I still think Liverpool are the best and most fearsome team in Europe”

Rio Ferdinand : “But they just lost the league title and #UCL final”

The record holders of the Champions League just added another to their collection. The Reds were good, but their profligacy on the night cost them a 2nd UCL title in 3 years. The way Madrid battled their way through some of the heavyweights of the competition made them deserving of the trophy.